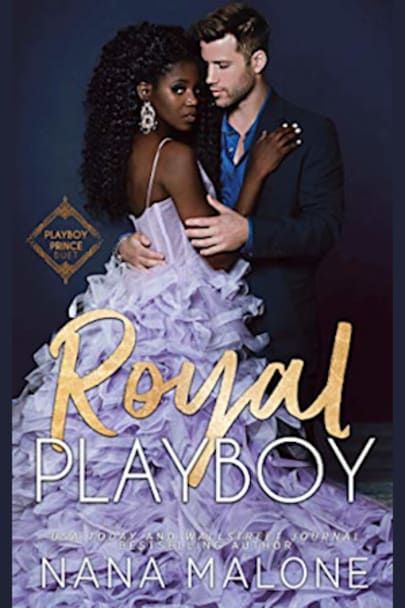 Vengeance is best served piping hot.Prodigal Son. Black Sheep. Playboy Prince. I’ve been called lots of things. Merciful is not one of them.It doesn’t matter what you call me, as long as I get what I want… sure I had a heart. Now that I know, I’ll give up anything to have her…
Well…almost anything.

I’ve gone in blind with this book. I know nothing about this world that Nana Malone had created with other books that’s shes written. And I don’t know why it’s taken me this long to read her books because I have seriously been missing out on all the goodness. I’m a serious speed reader when there’s a book that I’m really into and boy, did I speed through this one. I about threw my kindle when I got to the ending, what a cliffhanger! Xander and Imani are explosive together. The way they meet and how things play out had me on fire. Past traumas navigate the way that things are between them. I’m just truly in love with this story and I don’t know if I can wait for the next one, I’m dying for it!

b>No one can write romance that is sexy, emotional and thrilling at the same time like Nana Malone. These stories belong to a whole new trope. And something I am addicted to. Royal Playboy gave me the unmistakable high from Nana Malone’s signature writing. A broken, devilishly handsome, complicated and gorgeous royal. A girl who is changing his world. And the intricately scripted story of conspiracy, revenge and power plays. I am hooked from the first chapter.

If you have read her last duet, you have met celebrity photographer and royal descent Xander Chase. I was dying to read about his story as he absolutely fascinated me. He carries this cold, indifferent, rude and untouchable persona. But he is hiding a world of pain and ugly scars beneath his mask. He is determined to take down the person responsible for hurting him and damaging his soul irrevocably. Imani is not someone he counted in. The lovely girl aka talented actress from America came to London for studying. She has her own troubles and those pushed her to do desperate things. Like posing as Xander’s fake girlfriend while he tries to get closer to his goal. But neither of them realized they would have this undeniable magnetic attraction. Xander does not want her involved in his mess but their lives are entwined dangerously now.

Imani is so different. Her past relationship left her bruised and abused but she got herself together. I am awed by her big heart. She could have just ignored the subtle hints that Xander is not ok. But she went all in even when she knew she will be heartbroken at the end. Xander is an enigma. He has so many facets and I would never get tired of discovering them. This was a very torturing slow burn. With each push and pull, I felt the magic of their chemistry even stronger. Like every Nana Malone story, I lost myself easily into the pages and it ended too soon. And of course that shocking ending! Xander and Imani’s trust was built brick bu brick which was fitting due to their past experiences. It was filled with some extraordinary dreamy and romantic moments. And it also had some jaw dropping heated moments. With the perfect dose of suspense, it was just brilliant.

Royal Playboy was another royal masterpiece from Nana Malone that you cannot miss. Complex and swoonworthy characters will win your heart. The emotions are bleeding all over the pages. I want more of Xander and Imani!

I voluntarily reviewed an advanced reader copy of this book. The Chase brothers are a force of nature. Xanders first part of the duett is way more interesting, though. I loved this story – as it takes you back to the time when Xander met Imani and more interesting how he met her. The story is written very fluently so I went through the book in less than a day and can’t wait for the great final of the duett. Absolutely wonderful, though there one more time is a huge cliffhanger. Great book.

This book start off with a bang. And shattering glass.
And then travels back to their meeting and how they get to where they are!!

I really enjoyed this story. And seriously feel IN LOVE with these 2 characters!!

I don’t know how she does it, but Malone has once again got my attention. Royal Playboy contains the perfect book boyfriend. Xander is a walking dream, dragging emotions through his own worst nightmare. He’s all heart until his ruthless side comes out to play. Then all bets are off. Imani is his greatest achievement, but beware of heartache, because it’s never far behind. There’s always a twist waiting to be discovered between the pages of a Nana Malone novel. Unpredictable is only a page turn away.

Zander and Imani light up the pages.

“He was officially a Venus flytrap. Everything about him was meant to entice, to entwine, to ensnare.” ~Imani

The push and pull was so good. They both have past issues to deal with but complement each other in every way. From one shocking end to another, I can’t wait to read the rest of their story.

Nana Malone is a mean, mean author. Teehee!!! If you are a fan you understand where this is coming from. Be fore warned Royal Playboy ends in a cliffhanger. The next book is due out Feb. 25, 2020 it’s a long time yet with the holidays it should fly by. This book starts where London Soul ended. Royal Playboy is London Calling updated. This book goes a little more in depth of Xander and Imani’s relationship. It’s been a long time since I read London Calling so I forgot a lot of things, So I’m really enjoying it a second time around. Xander and Imani are brought together under unusual circumstances but I felt their attraction to each other. I really like Imani her need for independence, but I also appreciate her loyalty to her family. I get that Xander had things in his past but I felt he used it as excuses to stay closed off. Some how Nana Malone kept me on the edge of my seat turning the pages. You know something is going to happen yet you don’t know where its coming from. I found this book fun, entertaining and a pager turner. I voluntarily read and reviewed an advanced reader’s copy.

You would think by now I would be used to the cliffhangers that Nana Malone is so good at! But alas, when I reached the end of Royal Playboy I couldn’t believe there were no more pages!! Gah! I can’t wait for the next book! I loved it!!

Hang on to your seatbelts, this is one heck of a read. In true Malone style, there is never a dull moment. Intrigue, suspense, family drama and amazing chemistry found in the most unlikely places. This is a real page turner with a huge cliffhanger…. I’m on tenterhooks waiting for the denouement already!

Da*n this woman! I swear, this author needs to put a disclaimer in the beginning of all her books, ‘may cause bouts of rage and frantic finger movements at the end of this book as you claw through your Kindle searching for more words, thinking NO, DON’T LEAVE ME LIKE THIS!!!!’ Seriously though, if you’ve read her other books (and if you haven’t, WHY NOT? Go get some and message me to discuss!) you know we can trust Ms. Malone with our hearts. She will only make them bleed for a tiny while for her characters before she patches them all up good as new with a shiny bow and a letter of apology lol. She’s pushing it with Xander and Imani though, I’ve gotta say, these two better get all the happy ever afters as they have both been through enough to last lifetimes, they are surely due for some sunshine and good fortune. There are plenty of guys not to like as well in here, seems our intrepid duo have been surrounded by some pretty unsavory characters. Alastair, I want to tear his eyes out for poor Xander, and Ryan with Imani, something tells me that will get worse before it gets better. You can see the signs of entitlement and privilege from day one. Can’t wait for the rest of this sordid tale, something tells me things are going to be bad, so all I can do is hope the author makes the ending 10 times sweeter for them to make up for it!