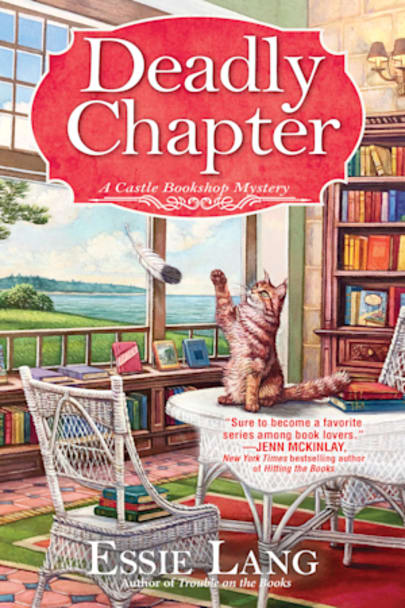 Thousand Islands bookseller Shelby Cox is caught between a lethal rock and a hardheaded newcomer in Essie Lang’s third Castle Bookshop mystery, a must-read for fans of Lorna Barrett and Vicki Delany.Wake up on a houseboat, moored in scenic Alexandria Bay, New York. Ride the gentle waves to work at quaint Bayside Books, where you spend your days supplying literature and conversation to the … literature and conversation to the charming locals and seasonal tourists. Sounds pleasant, doesn’t it? Except bookseller Shelby Cox has already sleuthed two murders from Bayside Books’s home base on Blye Island, one of New York State’s famed Thousand Islands. And this time, mayhem knocks right on Shelby’s waterside door when she finds a body lodged between the side of her houseboat and the dock, his skull shattered.

The victim is no local, but Shelby can’t shake the feeling she’s seen him before. Twice, in fact–that’s how many times he’s dropped into Bayside Books asking about an enigmatic woman who lived on Blye Island many years before. The last time? The day before he was found. But the poor man obviously was killed elsewhere, so who brought him down to the bay, and why?

When the victim’s daughter hits town demanding answers, Shelby takes the case, despite Police Chief Tekla Stone’s usual reservations. But she uncovers more suspects than there are pages in War and Peace, and Shelby can expect no peace–except the peace of the grave–unless she can turn the page on this grisly mystery.

How to Save a Life

I loved this great Cozy Mystery!!!
It was full of excitement! I loved the characters! This is a great book for Cozy Mystery lovers!

A Deadly Chapter is the third book in the Castle Bookshop Mystery series. It can easily be enjoyed as a standalone if you haven’t read the others as there isn’t really too much carryover. The characters relationships continue to evolve but you’re not missing too much stepping in now and they mystery/murder itself is fully contained within.

I really enjoyed the premise of having our nice cozy bookshop on the island and it being this quaint picturesque setting. I could easily imagine the setting and scenery described and readers are transported there. There’s something about the small town/closed society that adds that extra element trying to figure out if the “bad guy” is someone in the community or someone who’s come in from the outside. You know what they say; “Everyone’s a suspect.”

The pushback Shelby gets from local law enforcement gives us that element of fun because we can feel their (and her) frustration with one another. Is she making their job harder or helping point them in the right direction? Throw some family and relationship drama into the mix and that pretty much sums up this story.

I received an advanced copy of this story from the author through NetGalley and am leaving a voluntary honest review.

This was another fun cozy in this series. Shelby is right smack in the middle of another murder. She wakes up and goes up on her deck for coffee. She notices something in the water between her houseboat and the dock. She calls the police and at first they think it is an accident, but Shelby remembers this man coming into her bookstore. Then his daughter asks for her help in finding out what really happened.

It’s a great mystery and moves along at a pretty good pace. There were several suspects and I wan’t sure who was the killer. Great escape. I really enjoy these books.

Thanks to NetGalley for the opportunity to read this book and offer my honest opinion.

The story begins with the bookshop owner discovering a dead body stuck between her houseboat and the dock before she’s even had her morning coffee. Turns out that the victim was a regular visitor to town who has recently begun asking after a town resident. Enter her own boyfriend who will be moving six hours away, the prickly police chief, the victims daughter, and a whole host of suspects. Of course the bookseller begins sleuthing! Well plotted with great characters and a positive theme.
I requested and received a free ebook copy from Crooked Lane Books via NetGalley. Thank you!