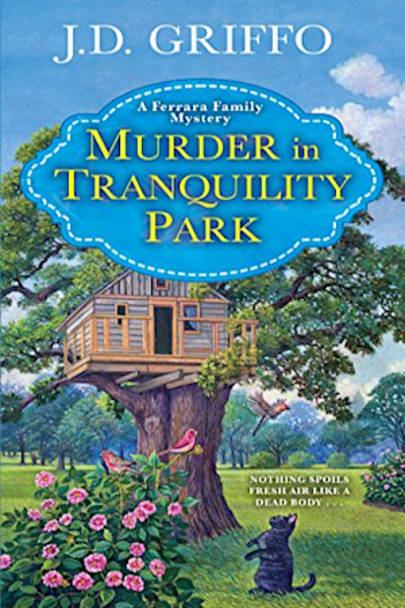 Alberta Scaglione and her twentysomething granddaughter, Jinx, love to spend time—and solve crime—together . . .   Ever since Alberta Scaglione inherited her spinster aunt’s Cape Cod cottage, she’s been enjoying the good life in Tranquility, New Jersey, with her black cat, Lola. But since things are mostly quiet in this town, she finds other things to do—like joining Jinx for morning jogs in … for morning jogs in Tranquility Park. She has to do something to stay healthy, as long as it doesn’t involve Jinx’s healthful tofu sausages and gluten-free pasta. But when they stumble across a treehouse hidden in the trees, and a dead body underneath it, they take a detour into solving a murder. Now the Ferrara ladies will have to exercise extreme caution to avoid a permanent decline in their health . . .

The Ferrara Family Detective Agency has stumbled quite literally onto another case. Jinx has convinced her grandmother, Alberta Scaglione to exercise, in the form of jogging a few mornings a week. Their path leads them through scenic Tranquility Park. On the way into the park, Alberta notices a treehouse in one of the trees. On the way out of the park, she notices a body under the treehouse. They quickly determine the man is dead, but assume he has fallen to his death from the treehouse. Just in case they check out the scene thoroughly and call in the rest of their family before calling the police to inform them that, yes, there has been indeed another murder.

Chief Vinny D’Angelo is an old friend and will admit the ladies helped solve the last murder case but he orders them to stay out of this one. Seriously, he knows that is never going to happen because his friend “Alfie” is never going to back away from anything she has set her mind on doing. He just hopes and prays none of them gets hurt.

Mr. Griffo has created such wonderful characters. The Ferrara Family Detective Agency is made up of Alberta Marie Teresa Ferrara Scaglione, 64, a secret millionaire who inherited her home and her wealth from her Aunt Carmela. She is joined by her granddaughter Jinx, who has returned to the area to take a job at the local newspaper, her sister, the former nun, and her sister-in-law who has retired after working years on Wall Street. Together they love their Italian food unless cooked by Jinx, who tries to make their favorites no-carb and gluten-free, several flavors of vodka, and solving murders. These characters are likable, engaging, funny, and at times absolutely crazy. They all go to great lengths to get answers. The dialogue between these characters is priceless. Alberta’s Sicilian Catholic roots play heavily throughout the book. Each chapter starts with an Italian phrase and Italian runs through the dialogue but is always translated in a way that never slows the flow of the story.

The mystery turned out much more complex than I ever imagined. Jinx’s roommate is the police’s prime suspect but the evidence is just too tidy. There were many twists and turns that brought other suspects to light. It was when the second body is discovered that a few little tingles for my suspect cemented themselves in my mind. I just had to keep reading to see if I was right. The ending is very dramatic and scary but one part of it felt a little off to me. I think what happened was much more dangerous than even was portrayed.

Murder in Tranquility Park is a great addition to this series. The characters are fun and entertaining. I really enjoyed this story.

I love Griffo’s quirky characters. What a great granddaughter/grandmother sleuth duo. And my Italian is improving!

Alberta and her granddaughter Jinx are jogging in the park when they find a tree house hidden in the trees with a dead body on the ground below. At first, they believe this was an accident but then some things are uncovered that just don’t add up. So when the suspects are too close to home Alberta and Jinx with the help of family and friends set out to solve this murder. Can they solve it before they too end up hurt or dead?

This is the 2nd book in the series but my first book. I had no problem enjoying this book or following the storyline. The characters are interesting and have great chemistry. The storyline is well written and the mystery has several twists and turns along the way. This is a humorous fun cozy mystery. As a bonus for Italian food lovers, the book includes some recipes from Alberta’s kitchen.

I voluntarily agreed to read a copy of this book supplied by Netgalley. All thoughts and opinions are my own and in no way have been influenced.

The Ferrara lady sleuths are very Sicilian Catholic older widow Alberta and her granddaughter Jinx, Alberta’s ex-nun sister Helen, and formerly sister in law a former Wall Street executive Joyce. Alberta and the health conscious Jinx go out for a morning jog in Tranquility park and find a decidedly dead body at the base of an old tree with a tree house but no ladder. While Jinx calls police, Alberta calls the other Ferrara sleuths. Enter Alberta’s childhood friend and Chief of Police, Vinny, and his preferred detective Kichiro who appears to be the boyfriend of Jinx’s roommate. From here on things only get messier and twisty complete with red herrings and improbable suspects! A great read!
I requested and received a free ebook copy from Kensington Books via NetGalley. Thank you!

Murder in Tranquility Park by J. D. Griffo was an entertaining cozy with some very likable characters.

The plot is smoothly paced with red herrings, several suspects, enough twists to keep me guessing and a dramatic reveal that had me gripping my chair. This author is new to me but her descriptive writing pulled me write into the story. I liked Alberta, Helen, Joyce and Jinx as each one has a distinct personality that added so much flavor to the story as I got to know them. The small town setting, likable characters and an intricate mystery made this book a pleasant experience.

I voluntarily reviewed an Advance Reader Copy of this book from Kensington via NetGalley. All of the above opinions are my own.