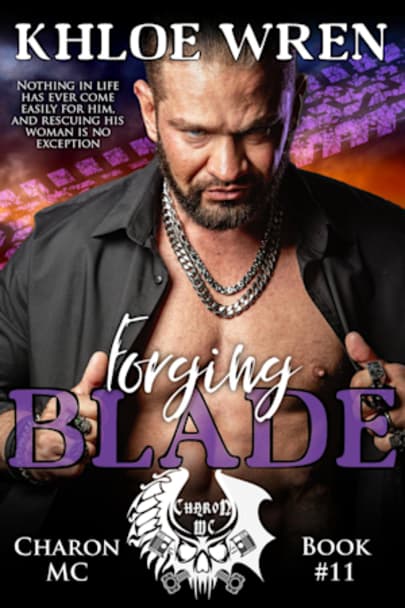 Nothing in life has ever come easily for him, and rescuing his woman is no exception.Jared “Blade” Walker’s life hasn’t been his own for a long time. Sold by his father when he was just sixteen to the head of the mob, he did what he had to in order to survive and became one of their most lethal enforcers. But now, thanks to his ties with the Charon MC, he has a chance to get some vengeance. But … chance to get some vengeance. But nothing in this life comes for free.

Veronica Jones has been hiding in plain sight in Bridgewater, Texas for seven years when Blade comes into the ER during her shift and throws all her careful planning out the window. Making her want things she’d never thought she had.

When both Blade and Veronica’s pasts catch up to them, will they end up having to pay the ultimate price for daring to give love a chance?

**If you’ve read the Blade novella in the Dirty Dozen MC edition anthology, you’ve read up to Chapter 6 of Forging Blade**

Bring the tissues and be prepare to cry. Blade doenst hold back and neither does Victoria and neither does Ms Wren, provoking emtion beyond the page that you feel to your very soul. I beautiful book that will leave you emotionally drained but wanting more.

Wow! From start to finish this read keeps you engaged. Khloe pulls you into the Charon world and just doesn’t let go with this latest installment. The realm of emotions that you experience with Blade and Veronica at your side as you follow their journey together will have your head spinning. I always get lost when reading one of Khloe’s stories, and this was no exception. As always Khloe well done you!

I absolutely love the Charon MC series!! Khloe has done it again with Forging Blade! She pulls you into the book and keeps you wanting more! Her characters are relatable and strong!! She is amazingly talented with her words! I definitely recommend this book/series!!

WOW! I’ve been on pins and needles waiting for this book to come out. Khloe Wren did not disappoint with her delivery. Blade is one delectably delicious, dangerous, cut-throat bad ass guy! Veronica is no wallflower. That girl has an inner strength that can rival most men’s strength. She will not be broken. Forging Blade really is one helluva ride! From beginning to end, you will not want to stop reading.

I absolutely love MC books, and this is one of the best I’ve read in a while. Thank you, Khloe for pulling me out of my MC slump

Veronica is on the run from her past. She hasn’t gotten too close to anyone until Blade comes into her life. He slow gets her to accept him and wants nothing more than to protect her from what she is running from. Before he can help her, his past comes back for him and Veronica gets tangled up in someone’s revenge against him. It takes the combination of two MCs to bring her back safely to him.

I have only read a few books in this series but seriously considering going back to read the others!

Well this book started out different than I thought. Got it because I thought it was mostly biker, but in the beginning Blade was part of a mafia type of business, although his father handed him over when he was 13 or 14 years old. Things were really bad for him growing up with that bunch. Especially when a young girl he was trying to help and he had his boys kill the girl. Needless to say Blade when kind of nuts from there. Probably won’t read any more of these books, not something I like to read. HEA.

This series is amazing and Forging Blade did not disappoint. The way this author has a way of pulling the reader into the pages makes you feel as if you are there. The character development that she is able to achieve is simply nothing short of amazing. The story line never boring. You are kept on the edge of your seat and unable to turn the pages quick enough to find out what is happening next.
Blade did not have an easy life nor did he have the perfect family life. Throw in a female whose life has been just as devastating as his you get nothing short of major intense sexual chemistry. This book is full of twist and turns keeping you guessing at what could happen next. If you like action packed, murder, motorcycles and hot sexy alpha males this is a must read. This book is so full of emotions that at times it is gut wrenching that is will pull on every emotion you have and some you never knew you had. Bring on the tears and tissues. THIS IS A MUST READ!!!!! Don’t let this book get past you. You will not be disappointed. As I stated before this whole series is amazing and Khloe Wren never disappoints in any of them. Can not wait to see where she will be taking us next. So readers get comfortable, get something to drink, a box of tissues (just in case) turn to that first page and get ready to be transported to an amazing world set forth to you by this amazing author Khloe Wren.