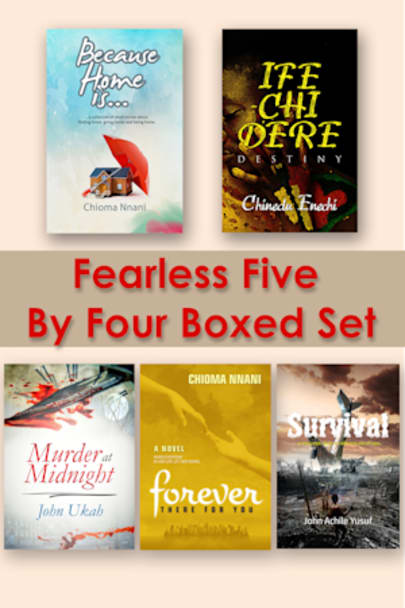 BECAUSE HOME IS: Some say that “Everyone is running from, or towards something”. But you run till you get ‘home’. Everyone wants to go home.Would you recognise ‘home’ if you saw it, him or her?“Because Home Is” is a short story collection about finding home, going home, and being home.IFECHIDERE: How far can one’s home life go to determine or scupper their destiny?When Ifechidere is accused of … destiny?

When Ifechidere is accused of being a child-witch by her aunt, nobody speaks up for her.

But after she collides with an unexpected opportunity, Ifechidere’s first day at school turns out to be even more than she hoped for.

When her marriage plans stall and she discovers the truth about her identity that’s been hidden in plain sight all this time, will the moral support of close friends help Ifechidere hold her happily ever after?

MURDER AT MIDNIGHT: The only things retired police officer, Alex Simpson wants when he comes to the Kinging Guest Lodge are delicious home-cooked meals and a serene environment. He is recovering from typhoid, after all.

The last thing he expects is to play private investigator in a criminal investigation.

Yet, that’s exactly what happens when another guest, Maria Marshall is found in her room with a knife sticking out of her chest.

Unfortunately, Maria is a woman of different faces. So, more than one other guest – including her own mother – has reasons to want her dead.

Under pressure from the State Governor and with a reputation to protect, an arrogant DPO makes it clear that he doesn’t need outside help to close a case.

But as the clock ticks, Alex becomes more convinced that there’s more to this case than meets the eye and someone will be arrested for a crime they did not commit.

SURVIVAL: Do you know any secondary school student, who could survive a plane crash… and a jungle?

Before a group of youngsters from the same Abuja private school, set off for the annual African Colleges Competition in South Africa – their only mandate is to return home with as many gold medals as possible.

But when their delayed flight turns into a flight cancellation, nobody foresees danger – especially as a replacement flight is sorted.

It’s only when their pilot loses contact with the control tower, that an air traffic controller has to admit he has no idea what’s going on.

In a race against time and with the elements, wild animals and other factors, which of the students has what it takes to survive a Congolese jungle IF they survive the crash?

There’s also the question of “what” will survive when close friends are thrust together by Fate in the ultimate reality show without cameras – first loves, innocence, sanity, sense of right and wrong, and hopes for the future…

FOREVER THERE FOR YOU: How does a daddy’s girl from Nigeria, who’s never been in a toxic relationship in her life, end up with an abusive husband in the UK?

The only child of a wealthy entrepreneur and a celebrity event planner, Nadine knows what it is to be ride or die.

Convinced she’s found her soulmate when she starts dating, Nadine hopes for a love marriage and a happy ending.

But Nadine’s dad isn’t particularly looking forward to a father-and-daughter dance at what he’s afraid might be an interracial marriage ceremony for her.

When unexpected events trigger a life change for Nadine, she feels her best bet is to reconsider her options without rose-coloured glasses. Meanwhile, her closest friend, Stella believes Nadine is having a quarter life crisis.

Will the loyalty of a perfectionist to those who aren’t there when she needs them the most, turn Nadine into a domestic violence statistic?

Or will Battered Woman Syndrome cause her to self-destruct in a foreign land, where the weight of generational differences she has carried with her, makes her feel alone?

Beyond the Higher Ground

All the World a Stage