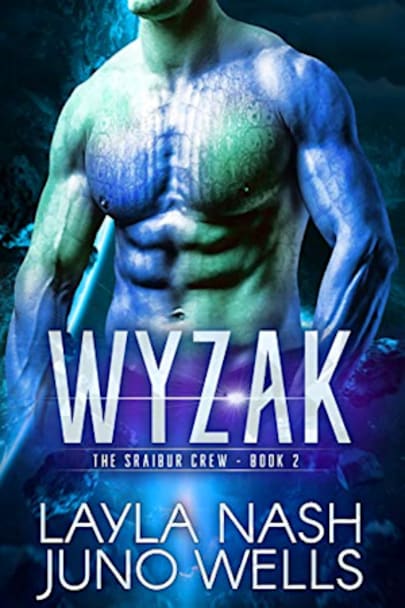 You can’t put a bounty on true love… Bounty hunter Gemma didn’t expect capturing a Xaravian pirate to be easy, but the moment she lures handsome Wyzak away from his crew, she knows she’s in over her head. He’s furious at being captured and intense enough to make her heart pound, not to mention he’s enormous, powerful, and too good-looking to be ignored. The Sraibur’s second-in-command Wyzak isn’t … second-in-command Wyzak isn’t going to go quietly when a bounty hunter kidnaps him. It’s only a matter of time until the Sraibur saves him — and captures the beautiful Earther who caught him. He should be furious with her and ready for vengeance, but she’s too alluring. Too sexy. Too… perfect.

When Gemma tries to make things right, she ends up with a bounty on her head, too. The only way they’ll survive and remain free is to work together, but Gemma’s past and their rocky start keep getting in the way. Can they put the past behind them and find a future together?

This is a very well-written Book 2 in the The Sraibur Crew Series and has some exceptionally well-developed characters that are dynamic and have great chemistry. I missed the first book in this series, so I need to go back and get the first book. It can be read without book 1 and feel like I did not miss part of the story.

Gemma is a bounty hunter, and she and her partner Milo are on Wyzac’s trail. He has a huge bounty on his head, and Gemma easily captures him and heads for their huge payoff. Actually, collecting it is another matter, and she ends up captured by the pirates. They need to work together to get their HEA and get free of the bounty.

Gemma and Wyzak’s love story is exciting, frustrating, funny and frightening, and I loved it and could not put down. It is a must read by a good Author.

Gemma looses the Bounty but finds her mate!
by sewsummore

This book was a read that ticked all the boxes for a Sci-Fi romance. The characters were multi-dimensional and I liked that about them. The story line was dramatic and the tension between Wyzak and Gemma was exciting and feisty. Gemma had a job to do and she did not want to be distraction by her attraction to man she had captured. Wyzak knew there was something special about the woman he met but did not expect her to be a bounty hunter intent on claiming the bounty for himself.When she is double crossed and looses not only the bounty but her crew mate it is hard for her to accept, as is the attraction between herself and the man who calls her his mate. This story with it’s many and varied characters would make a great series and I hope there are more book to follow this one.

WOW!!!! What else is there to say. This was a really HOT story, and you will be missing out if you do not read it. I could not put it down it was that good!

Loved the book it was great, the story was well written and the characters were interesting. Gemma bounty hunter captured Wyzak, for a reward until she was captured. There was twists and turns, adrenaline rush of excitement with hot and steamy chemistry between the two.
Thank you for you allowing me to review your book.

Book two in The Sraibur Crew series a well written addition to this series. This is Wyzak a Xaravian pirate and Earther bounty hunter Gemma’s story there is suspense, drama, danger, bounty hunters hunting the bounty hunter and romance. I want to read the next book. I received a free copy of this book via Booksprout and am voluntarily leaving a review.

Gemma is a tough, gritty bounty hunter just trying to make a living. She and her partner Milo take a job because she wants to take time off and use the credits they earn to upgrade her ship. Wyzak was not pleased to be taken captive by Gemma, especially as he gets lots of teasing about it. But he admired the spirited bounty hunter who was not afraid of him. He is also drawn to her … mate?

With a turn of events, Gemma ends up captured instead by Wyzak. Expecting retaliation, she is a bit surprised by what happens next! Grab your copy to see how this web of confusion, betrayal, and passion turns out for these two!

Gemma Rules! Except for her slight insecurities she is a role model for a smart independent sassy woman. Wyzak is a little arrogant but their instant attraction also turns him into an adorable male. The nonstop action in this tale kept me turning the pages, the romance was heartwarming, the world building was enthralling. Loved this sweet, sexy, space action read.

This book kept me reading from page one. You can relate to the characters. This book is full of action, humor, betrayal and sexy steamy romance. Gemma and Wyzak’s love is exciting, frustration, funny and at times frightening. Highly recommend this book. I received a free copy of this book and am voluntarily leaving a review.

Somehow I missed the first book in this series, so I need to backtrack for Violet’s story. It was easy enough to pick up midstream with book 2.

Gemma is a bounty hunter, and she and her partner Milo are on Wyzac’s trail. He has a huge bounty on his head, and Gemma easily captures him and heads for their huge payoff. Actually, collecting it is another matter, and she ends up captured by the pirates.

Gemma and Wyzak’s love story is exciting, frustrating, funny and frightening, and I loved every minute of it! Backtracking to Violet’s story immediately!

I received a free copy of this book via Booksprout and am voluntarily leaving a review. gemma and her partner milo are bounty hunters and she gets a bounty on the Sraibur ship for the second commander a xaraavian called wyrzar to be delivered to the tyboli but things go so wrong. Awesome story

I liked Gemma from the start she was a take no prisoner’s type of woman, or in her case just take the bounty. An opportunity to make enough credits to take a year off from bounty hunting and upgrade her ship was her reason for taking the unsavory job of capturing Wyzak. Her conscience wasn’t fully on board taking the job from the Tyboli but credits were credits.

Wyzak was a bit of a smart alec, but he had confidence in himself and his crew when he found himself taken prisoner by Gemma. Part of him was furious that she was about to hand him over to his enemy the other part of him was drawn to her. He liked her spirit and she wasn’t afraid to stand up to him.

Once the tables were turned and Gemma was now the one under Wyzak’s power she expected to suffer a very painful death as retribution. Instead these two found that their passionate natures meshed very well.

As big and bad as Wyzak was he’s was pretty much putty in Gemma’s hands. He listened and watched and tried as much as he could to get her to stay with him. Yes their start wasn’t the best but he forgave her once he understood.

Gemma while she presented a hard exterior was really insecure about her prosthetic arm, she felt it made her neither full human nor full cyborg and therefore nothing. Now with the destruction of her ship and the loss of her partner she was left all alone again.

I have to commend the author for not doing what every author seems to be doing lately with the power-exchange/spanking thing. That gets so old after a while and it seems aliens love to spank earth women…sigh.

There was good banter between Gemma and Wyzak. His crew and his captain while they ribbed Wyzak for getting captured by Gemma all had his back. It was a fun read as these two got to know each other and grew from the exchange.