Wrath of the Ancients 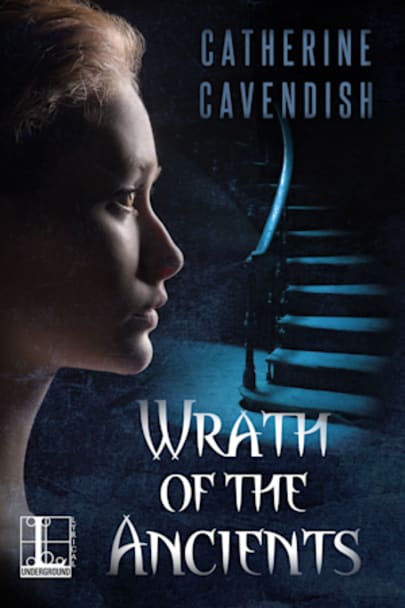 DESTINY IN DEATH   Egypt, 1908   Eminent archeologist Dr. Emeryk Quintillus has unearthed the burial chamber of Cleopatra. But this tomb raider’s obsession with the Queen of the Nile has nothing to do with preserving history. Stealing sacred and priceless relics, he murders his expedition crew, and flees—escaping the quake that swallows the site beneath the desert sands . . .   Vienna, 1913   … sands . . .

Young widow Adeline Ogilvy has accepted employment at the mansion of Dr. Quintillus, transcribing the late professor’s memoirs. Within the pages of his journals, she discovers the ravings of a madman convinced he possessed the ability to reincarnate Cleopatra. Within the walls of his home, she is assailed by unexplained phenomena: strange sounds, shadowy figures, and apparitions of hieroglyphics.

Something pursued Dr. Quintillus from Egypt. Something dark, something hungry. Something tied to the fate and future of Adeline Ogilvy . . .

WRATH OF THE ANCIENTS

Praise for Catherine Cavendish’s Wrath of the Ancients

“Cavendish has constructed such an elaborate plot—combined with painstaking research into Egyptian mythology—that the fantastical events taking place seem to literally ‘come alive’ on the pages before you.”
—horrorafterdark.com

“Cavendish offers up an atmospheric gothic horror tale that effortlessly blends together history and the supernatural to create an unsettling horror story that will appeal to almost any horror fan.”
—thehorrorbookshelf.com

WRATH OF THE ANCIENTS is Book 1 in the Nemesis of the Gods series by Catherine Cavendish. This book was an incredible blend of hysterical fiction/horror, dealing with an ancient Egyptian curse. The novel begins with a scene near the ruined temple of Taposiris Magna in Egypt, 1908. In this shocking and all-consuming opening, we are introduced to the ruthlessly obsessed Dr. Emeryk Quintillus, a tomb pillager only interested in getting what he wants.

What he desires–at any cost–is to be united with the Egyptian Goddess, Cleopatra, for eternity.

The majority of the action then shifts to the year 1913, when Adeline Ogilvy is employed by the late Professor’s extravagant estate in Vienna, in order to transcribe his memoirs. The guidelines are rigid and inflexible, and the task as inscrutable and enigmatic as the man, himself, was.

“. . . But then, there was much about Dr. Quintillus that he chose to keep to himself.”

This novel was so expertly driven that I found myself being constantly impressed with each and every new twist that I couldn’t see coming! Cavendish has constructed such an elaborate plot–combined with painstaking research into Egyptian mythology–that the fantastical events taking place seem to literally “come alive” on the pages before you. Reverences to the ancient gods and goddesses leave you feeling as though you’ve actually visited among them. Their beliefs, guardians, and curses become “reality” in this book, and the normally “impossible” suddenly becomes all too tangible to our main characters.

“. . . impossibly mummified. Or somehow still alive. And he wasn’t alone.”

From the various historical settings and times, to the individual characters we cross paths with in each scene, Cavendish has managed to remain “true” to each event no matter what leg of the journey we are on. It is a testament to her skill that I never felt “outside” of any particular development as the novel moved along. Rather, each place and person stood out as remarkably consistent to how things might have really been at that point in time.

In the course of this narrative, I “believed” in the story, characters, and the repercussions that transpired. To be able to carry a reader away like that is a true talent, and I give great credit to Ms. Cavendish for managing to keep me completely absorbed during the entirety of this novel.

Overall, I was highly impressed with the quality and depth of this novel, and am very eager to read the next book in the “Nemesis of the Gods” series.

“. . . It seems in this house the impossible becomes reality a little too frequently . . . ”

This is my first Book By Catherine Cavendish and I found it to be suitably chilling with an almost gothic feel to it, overall I found this an enjoyable pleasant experience.
“Wrath of the Ancients” tells the story of archaeologist Dr Emeryk Quintillus and his quest and
obsession to resurrect his beloved Queen Cleopatra through any means necessary.
Doing this sets in motion an ancient curse that will have repercussions echoing down through the century.
So this is where our Adeline Ogilvy, a young widow, comes onto the playing field.
Miss Ogilvy comes across as a very sensible, pragmatic, and I would say not easily spooked young woman. I found her to be a very likeable character.
So Adeline is employed under false pretences to journey to Vienna to transcribe the late Dr Quintillus’s memoirs. Supposedly being a direct descendant of Cleopatra herself she is needed to complete Dr Quintillus ritual. To be the vessel he needs to restore his beloved Queen.
What follows is a truly frightening and menacing experience for Adeline and all who attempt to aide her in her battle with this old ancient evil.
Now, this is the part of the story I loved and despite initially thinking I was going to struggle with the writing style I soon got into my stride, riveted with not only this eerie Egyptian horror tale but also so immersed in 1913 Vienna.
I especially loved the little snapshots of historical figures intercepted throughout, this was a very nice touch indeed.
Now if I was Rating on this part of the story alone, I would give this a four star all the way.
I couldn’t put “Wrath Of The Ancients” down, so needed to know what was coming next.
My main issue was that despite the excellent woven tale I encountered in Part one of this book, Part two itself fell a trifle flat for me.
It seemed rather rushed, as well as short and didn’t really flow that well, just my opinion.
In fact, I would go as far as to say, I found it an actual chore.
Surprisingly, I took longer to get through this short part two than its predecessor and it pulled for me, what was a so promising book down slightly.
Thankfully Part three made me smile again especially getting to connect with an Adeline who is now in her Eighty’s.
I loved hearing her casual everyday observations of the differences in life she now experiences.
It was So removed from her life in 1918 showcasing the progression of time and its effects.
So It’s now 1964 and Markus Von Durnstein resides in that dreaded house, he writes needing Adaline’s help, so she agrees to travel to Vienna to assist, though nothing on earth will persuade her to reside in that evil house,(Don’t bloody blame her) it’s a hotel all though way for Adeline.
The two team up to try and defeat the darkness encroaching, this time hopefully for good.
So I’m gonna break this down as this is a hard one to fairly judge.
Part one – So good, definite four stars.
Part Two – Seemed rushed and too short, two stars at the most.
part three – back on form again, back up to a three.
There is also a very brief afterword which I will get to that in a minute.
so I’ve decided to meet in the middle and give this three stars.
I also wasn’t quite onboard with the style of narrative, as besides the prologue, we spent so much time in Adeline’s head, it was a major shock to suddenly find myself in another.
Maybe if an extra point of view had been thrown into part one, I wouldn’t have felt as adrift later on, but that’s just a personal opinion.
Now for the afterword, I will be short and sweet here.
I didn’t like it, thought it was completly unnecessary and it left me with a very bad taste in my mouth indeed.
So there we have it a good solid read, which I experienced a few minor issues with.
Still very much worth giving a go.
So if you like spooky gothic ghost stories with a smidge of horror and if like me you like anything to do with Egyptology give this a go.
Thank you to NetGalley the publisher and the author for providing a free arc of “Wrath Of The Ancients” By Catherine Cavendish, this is my own personal unbiased opinion.