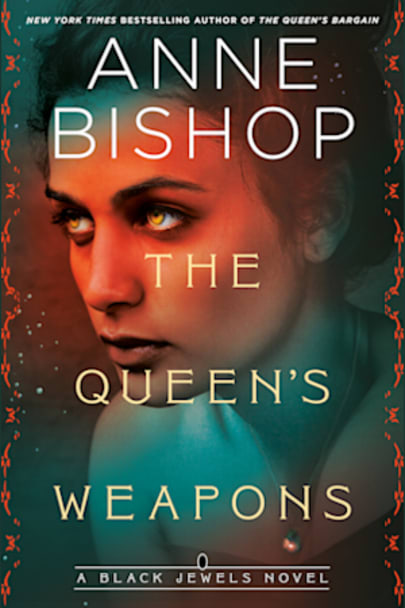 Enter the dark and sensual realms of the Black Jewels, a world where power always has a price, in this sweeping story in the New York Times bestselling fantasy saga.   They are Warlord Princes, men born to serve and protect. They are the Queen’s Weapons, men born to destroy the Queen’s enemies–no matter what face that enemy wears.   Daemonar Yaslana knows how to be bossy yet supportive–traits … be bossy yet supportive–traits he shares with his father, the Demon Prince, and his uncle, the High Lord of Hell. Within his generation of the family, he assumes the role of protector, supporting his sister Titian’s artistic efforts and curbing his cousin Jaenelle Saetien’s more adventurous ideas. But when a young Eyrien Queen, someone Titian thought was a friend, inflicts an emotional wound, Daemonar’s counterattack brings him under the tutelage of Witch, the Queen whose continued existence is known only to a select few.

As Daemonar is confronted by troubling changes within and around the family, he sees warnings that a taint in the Blood might be reappearing.  Daemonar, along with his father and uncle, must uncover the source of a familiar evil–and Daemon Sadi, the High Lord of Hell, may be forced into making a terrible choice.

The darkness continues in the latest book in the Black Jewels series so prepare yourself for another gut-wrenching story. Although we’ve made it to book 10, this one circles back to the first book in the series, though it now involves the kids and the situations they’ve put themselves in. It’s different since Janelle Saetien is not a queen, but rather an instigator, but doesn’t make it any less anxiety ridden as you read it. I really disliked her as a character, and wish her actions would have been spurred by someone spelling her, but sadly no. It’s redeeming to see how the other kids act and how they really do try to do the right thing. Surreal redeems herself a bit also. I rated this as 4 stars because it really did drive me to read the book as fast as possible to see what would happen next.

My criticisms would be how the story mirrors book 1 really closely in what happens to Janelle, and the repercussions of Dillon in book 9 finally come to fruition, but the evil is resolved. I just don’t have a clear visual of what could be the conflict in the next book. I’m glad there isn’t a cliffhanger; don’t get me wrong. Yet I wish there was a bit more than there is to drive me to get the next book. As it is, I’ll appreciate the break and read more fluff for a while before I start taking these dark and twisted roads again through the Black Jewels series.

Anne Bishop’s Black Jewels series is a long-standing favorite of mine. Each of these now 11 books are long, deep dives into a world that is fantastically detailed and deliciously satisfying in every respect.

I am waiting for my copy to arrive, I want to know WHY this series is not a movie!

Another great installment in the Black Jewels series.

The Queen’s Weapons by Anne Bishop is the 11th book in her fantastic Black Jewels series. I am a huge fan of Anne Bishop, as I have read all her series. Black Jewels has always been one of my favorite all time series, and every time Anne gives us a new book, I cannot wait to savor it. The Queen’s Weapons was such a fantastic read, I could not put the book down, as this was a masterpiece similar to book 2 and 3 of the initial trilogy.

Daemonar Yaslana, Lucivar’s son, who is now old enough to join his father and uncle in protecting their family against any enemies. When he is approached by a young queen with threats of sexual obedience, a red flag arises and he tells his father, who in turn alerts Daemon. Hundreds of years have passed when the war against the evil female enemies from Terreille were destroyed, but some things are beginning to reappear, and they go on alert.

Jaenelle Saetien, Daemon and Surreal’s daughter, wants to go the same school that her cousin Titian is going to learn art; another young Queen (Zoey), very well liked, and has become close to Titian will also attend. In a short time, Jaenelle befriends some of the girls, who are not very nice, but she finds herself wanting to be part of their group, and keeps her distance from her cousin and Zoey. I will say that in this entire story, I did not like Jaenelle Saetien, as she became very much like her new friends, a b***h. Her treatment of her mother, Surreal was terrible, and Janelle thought nothing of being nasty, and pushing her mother away, and just about alienating everyone, accept her new friends. Daemonar, worried about his sister at the school, decides to enroll, so that he can protect her.

What follows is Daemon, Lucivar, Surreal and Daemonar begin to investigate what is happening, and become centered on Jaenelle’s friends, both girls and boys, and the danger escalates, especially after Jaenelle defends them as doing nothing wrong. Zoey, who is destined to become a major Queen, is very much in danger by this group that is called the Coven of Malice. But to get to Zoey, the coven push Jaenelle to have a party bringing everyone together, and be friends; which is far from the truth.

The last half of the book was sensational, exciting, intense, with heart shattering moments that do not allow you to put the book down, as you become totally enthralled. I will say I absolutely loved seeing our favorites come forth to fight a new battle, as it was great to not only have Daemon, Lucivar, Surreal, Tersa, Marian, but I also loved seeing Karla play a bigger part, especially Jaenelle (Witch) to help them, and of course, the return of kindred. It has always been a joy to spend time with these wonderful strong characters written by Bishop.

The battle to destroy the evil that is rising, was an amazing race to the finish that I held my breath throughout. They all join hands to stop the destruction, and it is Daemon, as the High Lord of Hell, who will make them pay their debts. How far will he go? To tell too much more would be spoilers, and I do not want to ruin it for you, as this is a must read. I loved that the last few chapters gave us a look at what happens to those who survived, and what the future holds for all of them.

Anne Bishop not only creates such wonderful leading characters, her secondary characters continue to be to be equally memorable. Black Jewels has always been one of my top favorites, especially all those people we loved, and Anne Bishop continues to bring joy to our lives with these fantastic characters. Bravo to Anne Bishop for giving us another masterpiece in this series. I want more.

Each new book in this series seems to become my favorite. This one’s edgy, with sharp wit and poignant impact where you’re not necessarily expecting it. Sometimes, people who make poor choices have to face what happens next.

I have always been a huge fan of the Black Jewels Series. The original Trilogy is still my favorite, with the Shalador Dualogy following second. The other books in the series have not been great, though Daemonar has become a favorite character in the newer set. The Queen’s Weapons, while better than the rest of the books focusing on Daemon Sadi and Surreal after the original trilogy, is still not up to the original standard.
The characters themselves were well-written, but I just didn’t believe the plot. This story focuses on the children of our well-beloved characters, and the trials of adolescence.

However, with all of the lessons learned by her parents, I found the reactions and upbringing of Jannelle Satien to be hard to swallow. I didn’t enjoy any of the story told from her point of view- Daemonar and Tersa were much more fun to read. It just feels like continuing Janelle’s story keeps yielding weak plots. I would much rather read a book entirely focused on any of the new characters with a plot separate from preventing the Blood from becoming corrupt. So while I really liked Daemonar and Tersa’s parts, and would happily read more books about them, that means I enjoyed about 60% of The Queen’s Weapons. I would say read it if you are a fan of the series, just to know what has happened, but you can pretty much skip Janelle Satien’s parts and still understand what is happening. An underwhelming 3 stars.