The Guy on the Left (The Underdogs Book 2) 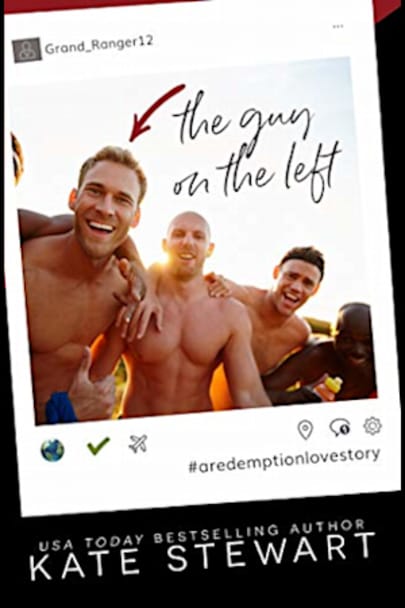 It started with a lie. A night of blurred lines between a teacher and a student.I wasn’t her student, yet it was the single most defining night of my life.I’ve never been the man she thinks I am.Most people have no idea about the life I’ve lived or the words that ring true when it comes to me—still waters run deep.But you’d be hard-pressed to find a coed on the TGU campus who knows … TGU campus who knows otherwise…because I’ve never corrected them.

The clock is ticking down, it’s Fourth and Inches with the ball inside the one-yard line and the focus is on me, The Guy on the Left. I’ve never felt like a football god, inside I’m…just Troy.

For my son, I‘ll find the strength.

In her eyes, I’m determined to gain redemption.

I will have them both, even if I have to take my eye off the ball.

All books in the series can be read as a stand-alone.

I loved this book. I never expected to love Troy as much as I did. I picked this up with the intention of just reading a few chapters. I ended up not sleeping or putting it down until I’d finished.

Troy told a lie one night that ends up coming back to bite him. He didn’t do it to be malicious, but that doesn’t help him with the situation he finds himself in. Honestly I was team Troy after reading his first paragraph. This guy had me crushing so hard. There is so much more to Troy than what people think and I loved the maturity he showed and his determination to step up and be the man he knows he can be.

Clarissa and Dante are an awesome little team and I loved their relationship. Dante is freaking adorable and his bond with Troy is the sweetest thing. I’m a little torn on how I feel about Clarissa. On one hand she’s an amazing mum, a caring friend, a strong independent woman who will heaven and earth for her child and I couldn’t help but admire her. On the other hand, this woman can hold a grudge. She makes me look like an amateur grudge holder. And while I completely understand the whys of her holding on to her grudge, it did not make me agree with her. As a reader she frustrated me, as a mother I would have done the same thing.

I absolutely loved The Guy on the Left. Troy and Clarissa are really easy to like and Dante and Parker both definitely won me over. I’d love to hear more from Parker at some point, I’m already halfway in love with her. This book has everything. It’s hilarious at times, I’m not ashamed to admit (although I am really shocked) that I cried big fat tears reading a part of this book, the emotions really got to me (Well done Ms Stewart, I’m not an emotional person). It’s hot, the chemistry is off the charts, it’s sweet and if you’re like me you’ll catch yourself smiling as you’re reading. I can’t recommend this book enough.

Kate Stewart has a winner with The Guy on the Left. Really, the entire Underdog series has been great. I highly recommend it.

But let’s talk about Troy Jenner. I like my heroes strong and determined with a soft, understanding side and maybe with a bit of dirty talk too and Troy Jenner fits that to a tee. He loves and respects his mother. He loves his son and wants to be a good father. He wants to be the man he thinks Clarissa deserves. He admits to his mistakes and wants to be a better person because of them. He’s taking control of his life and going after what he wants. He’s more than the surface shows or what anyone believes about him. He is one mighty, mighty, good man.

Clarissa Adler was hard to like, but I understood her reasoning and choices. She had to make tough decisions though I don’t think she needed to be so rigid when it came time to reconsider. She has more to think about than just herself and I get that, but I still wanted her to soften up some. I can say she is a phenomenal mother.

Their love story was a delectable slow burn tempered with hilarious moments and heartbreaking ones too. It wasn’t always a smooth ride but that’s life and love. The heat sizzled between them, but it was their time together learning about one another and building their relationship that I really enjoyed the most.

Dante is as much an important part of the story as Clarissa and Troy. He’s such a sweetheart and so smart. He’s lovable in every way. The relationship he develops with Troy has just as much impact as the romance itself. And Parker, Clarissa’s best friend, is also integral to the story. She’s the kind of friend every woman needs and I loved her honest talks with Clarissa and the straightforward advice she always gave.

The Guy on the Left definitely has fun and sexy times with witty banter and a wonderful cast of characters but it packs one heck of an emotional punch too. And the only other thing I can tell you is to read it, just read it!

I absolutely adored Troy and Clarissa, their chemistry was nothing less than explosive. Troy was so dedicated to being a father in any way he could even with everything going on in his life Dante was his priority. Some of the moments in this book had tears pouring down my face, tightness in my chest and a lump in my throat. I loved every page of their road to redemption

I love the way this series is turning out to be nothing like I expected, each one is different, with characters who are so much more than I anticipated. The Guy on the Left is another wonderful story in this series and it knocked my socks off.

Troy and Clarissa’s relationship is so far from straightforward. It’s messy, it’s emotional, it’s raw and intense and yet so real. Troy is such a beautiful soul and he stole my heart. He’s caring and hardworking and I couldn’t help but admire his dedication and determination as he put his all into everything he did. Is he perfect? Of course not. Is he young and makes mistakes? Absolutely! However, he is not at all what you may think from the outside. He is hugely motivated, with his heart in the right place, which for me more than made up for any slight errors of judgement on his part. It certainly didn’t stop me from loving the bones of him. The friendship, for that’s what it was, between him and his son was fantastic. Hysterical at times, heartwarming at others, it couldn’t have been more perfect. To say he stepped up would be an understatement. I challenge you not to fall in love with him yourself.

Clarissa had a harder time winning me over. She did what she believed was right at the time and I guess no one can fault her for that. She’s not a terrible person, but she is not blameless either. At some point her decisions became unreasonable and I could’ve shook her. However, thanks to Ms Stewart’s wonderful writing, we were able to get into Clarissa’s mind and I understood her more and where she was coming from. After all, no one wants to put themselves or their child in a situation where they could get hurt. She certainly does not have it easy and life is a struggle for her too. She’s a great mom and I really loved her relationship with little Dante, who is an absolute darling. He’s funny and forward and precocious, in a hugely endearing way. We also got a glimpse of his vulnerabilities, which made me want to grab him and hug him tight.

The courtship between Troy and Clarissa is a slow burn, but not painstakingly so. Their physical attraction is undeniable but because of the way they initially met, it made sense that they actually needed to take their time to get to know one another. Besides, they’re both witty and it’s great fun witnessing their teasing and flirty banter.

However, the course of true love never did run smooth, as they say. There’s a lot of push and pull between this couple and Clarissa had some soul searching to do when it came to her motives. Nevertheless, I was rooting for them and I really hoped she’d come to her senses before it was too late.

The Guy on the Left is hugely enjoyable, the perfect combination of sweet and sexy, funny and emotional. It’ll pull on your heartstrings and steam up your kindle and I personally couldn’t have wished for anything more.