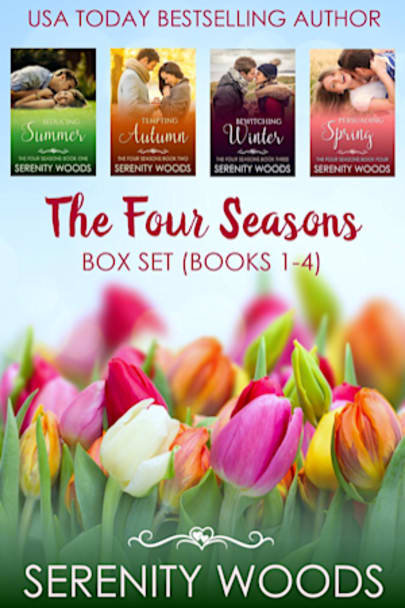 Four friends. Four seasons. Four ways to fall in love.Four sexy seasonal romances by a USA Today bestselling author.Seducing SummerWhen a CEO falls in love with her PA, it can only lead to trouble… Winter

They have a second chance at love – but will they take it?

Warning: get set to sizzle with these four sexy seasonal romances, even in the middle of winter! You have been warned!

Starting Out in French: Part 3–Working, Socializing, and Making Friends

Starting Out in Spanish

Callie, Rowan, Neve and Birdie own a lingerie shop called Four Seasons and the individual books of how love comes into their lives have now been wrapped into a boxset. Below are my reviews for each one.

I loved how feisty Callie was and how she could deduce things about others by sheer observation (very Sherlock Holmes), I loved the friendship between the girls and the heat between Gene and Callie. Felt this was a very well put together novel with a great plot. What I didn’t like was the use of the F word which was scattered through the book, I suppose it was appropriate as Gene was x military but I have worked with soldiers who don’t feel the need to swear in front of ladies!

Rowan is the vulnerable girl in the group due to events in her past which she has kept hidden but she finds herself opening up to Hitch, one of the few men she feels comfortable with because he is her friend Birdie’s big brother and she has known him for years. I love the premise of friends turning into lovers and I loved how tender and patient Hitch was with the girl he had been lusting after for years. The romance between the two of them was both sweet and steamy and I was rooting for the HEA ending and was not disappointed.
Again what I didn’t like was the use of swearwords (F and S) which were scattered through the book.

I’m a sucker for second chance stories, which allow for things to get intense quickly. Neve and Rhett both feel betrayed by the others reaction to a decision Rhett made in the past without consultation. Neve has a surprisingly soft centre which she hides with an outer shell and feisty tongue, whilst Rhett has grown into a man at home in his own skin. Though they haven’t spoken in years, their feelings for each other haven’t gone away and when they meet at a conference, Neve believes that she can let go of the past enough to try and be friends. Things don’t stay platonic for long but Neve protects her heart by treating their encounters as a fling, which doesn’t go down well with Rhett who feels they should have moved on from the mistakes in their past. When will men learn that we NEED the word ‘sorry’ to let go of our hurt and anger? This was a page turning book.
Warning of Strong Language.

Bridget (Birdie to her friends) is rescued by Aaron and his 7yr old son Mateo on the worst day of her life, and they both make her feel a little bit better (chocolate fudge ice cream anyone?). Aaron is a real gentleman, a white knight in shining armour and his son is adorable. Despite the situation they feel an attraction, one that is strong enough for Bridget to look him up again a week after her wedding was called off. Once they meet again they can’t resist the attraction they feel, even though they have both been scarred by love and have lives 500 miles apart. This was a delightful story and a fitting end to the series.
Warning of Strong Language.

I received free copies of these books in exchange for an honest review. I was not compensated for my review, and I was not required to write a positive review. The opinion expressed here is my own.
Read 2017