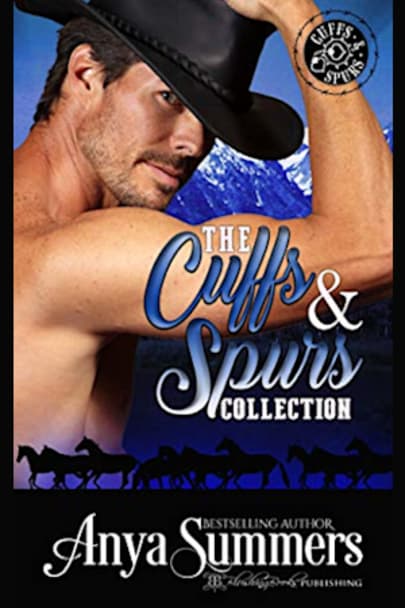 Welcome to Cuffs & Spurs… they cannot live without.
This is the complete collection of the original eight full-length sultry, steamy Western romances. It includes…

HIS UNEXPECTED LOVE: Jenna & Carter, The Beginning
HIS SCANDALOUS LOVE
HIS WICKED LOVE
HIS UNTAMED LOVE
HIS TEMPTING LOVE
HIS SEDUCTIVE LOVE
HIS SECRET LOVE (Plus bonus scene)
HIS CHERISHED LOVE

Oh, those sexy cowboys and their strong and independent women!

This is a series we meet “real” cowboys that are in to a bit of kink, have strong ethics, and want a woman that allows him to take care of. I have previously read several of these stories and enjoyed Anya’s storytelling, characters that argue and find they are stronger for it. Each story has a well crafted tale of honor, devotion to their partners, and a bit of kink when they engage, and romantically charged “almost” insta-love. Almost all of these characters have hurdles over before they are ready for a mate and they work together to build stable relationships that they all deserve. I definitely, recommend this collection or each novel independently. Happy reading.

I originally read and reviewed these stories below. Having them in one set makes it easier to binge read the series. If you like Alpha cowboys and a little kink, this series is for you.

“His Unexpected Love”:
The beginning…
While I was reading “His Scandalous Love”(which was released first), I had questions about Carter and Jenna. Remarks about their original meeting was made and I felt like I was missing something. This story is that “missing” part- the prequel that I needed to understand Carter and Jenna a little better.

“His Scandalous Love”:
Learning to trust…
Loved this story! With this being the first in a series, there was a lot of “world building” and introduction to characters. Ms. Summers managed to weave it all together perfectly without disrupting the actual story. I loved how the “big Alpha Dom” Carter was brought to his knees by Liam. Jenna was someone I could relate to. It was understandable that she had a hard time trusting things would be alright after the life she had lived so far. I am so looking forward to seeing what is in store for the rest of these cowboy Doms…especially Spencer and Meghan.

“His Wicked Love”:
Hot in the kitchen…
What’s the old saying…”If you can’t take the heat, stay out of the kitchen”? Well the heat between Mason and Emily is hotter than any kitchen. These two skirt around their attraction until it finally ignites. Will they both get burned or have they found the recipe for true love?

“His Untamed Love”:
May be the best….
This is book four in the “Cuff & Spurs” series and may be the best in my opinion. While I have loved all the books in the series, there was something about this one that pulled me in. Maybe it was how I could relate to Mia. Anxiety, stress and writer’s block is pushing her to a nervous breakdown. Needing a break, she heads to Jackson Hole to relax and regroup. What she finds is Cole. Cole believes he has had and lost his “one true love” so he keeps women at arms length. Sure he plays with the subs but he never gets close. That will all change when he meets Mia. Their relationship will change them both. Will Cole be willing to let the past go and embrace a future with Mia?

“His Tempting Love”:
Don’t lie to me…
I have to admit that the “Cuffs and Spurs” series is probably my most favorite by this author. This story is another wonderful addition to the series. Cora is a single mother trying to do it all. She has returned to Jackson Hole with her son Milo at the encouragement of her cousin Spencer. Cora’s first meeting with Garrett awakes feelings she thought was long dead. As the two try to work their way towards a relationship, Cora asks only one thing of Garrett- “don’t lie to me”. When a figure from Garrett’s past comes calling, that promise may cost Cora not only Garrett but her cousin too. I suggest you read this story to find out what happens. I can’t wait to see which character’s story is told next…..

“His Seductive Love”:
Teddy-bear Dom…
“Cuffs and Spurs” is my favorite series by this author and this may be my favorite story in the series. Alex is definitely my most favorite Dom. Dealing with his dad’s medical issue has left Alex feeling like he’s no “in control”. When he switches his need to be “in control” to Layla, Alex may lose everything. I loved Layla. She was the perfect sub for Alex. While she had her own issues/fears to overcome, she was willing to try for Alex. Will Alex overstep and lose Layla? Like I said, this may be the best story in the series and Alex, the teddy-bear Dom, is wonderful.

“His Secret Love”:
Little Brat…
The wait is finally over! Ever since these two first “butted heads” in Carter’s kitchen, you knew their story would be explosive. Anytime Spencer and Meghan are together they bicker and throw insults at the other. In other words- foreplay. When Spencer is trapped with his “Little Brat”, they create enough heat that the snow should have melted instantly! Both have issues that stem from their past that could destroy any chance of a HEA. All I will say is there is a lot of fireworks before then. I can’t wait for the next trip to Jackson Hole.

“His Cherished Love”:
The last to fall….
If you have read this series, then you are familiar with both characters. Jack is the last of the “original” crowd to still be single. This is a fact that has had him doing a lot of thinking especially while on medical leave from the police department. Rayna’s first appearance raised several flags. As a reader, you knew she was hiding something. Well, that something is revealed in this story and it could get someone killed. It definitely will bring danger to Jackson Hole. I loved this one! I especially loved the fact that despite being a Dom and used to protecting his sub Jack firmly believed that Rayna should have been told what was going on.

I am voluntarily writing this review for this book I received through Booksprouts arc.

This series was very entertaining all books are separate but together they are sensational.

This is such an awesome book set. I loved being able to read all the stories in one collection. Mia and Cole’s story touched me the most. Phenomenal book set, well written!

This is such a great set!! I absolutely loved this series! I think Jenna and Carter are my favorite couple. But it’s really hard to choose! All these couples who have an Alpha or2 that is hot. The heroine’s are all beauty’s and have a backbone of steel. Recommend this book to all those who have wanted to read them and get them all at the same time! the “ Pleasure Island Collections” it too has some awesome stories in it! Anya Summers is a great Author and she has another win!

I received an advanced of this book via Booksprout and am voluntarily leaving a review.

This could be the ultimate Christmas present – all 8 of the original Cuffs and Spurs books in one fabulous collection. If you’re new to the series, this will be a treat like no other. The mean are friends, as well as hot Doms, and each book sees each meet their nemesis – that one woman with whom they see a future. Each book also has D/s scenes that will leave you a little … breathless. From Carter meeting Jenna on Pleasure Island and their reconnection back home with a surprise (His Unexpected Love continued in His Scandalous Love); the ubersexy Black Elkhorn Lodge and Resort’s brothers and the women that capture them (His Wicked Love and His Untamed Love); Garrett and Jack each finding the right woman; and of course Spencer, owner of Cuffs and Spurs who has to ban himself for bad behavior. And my favorite, Alex and Layla (His Seductive Love). This is a book to be indulged in, whether that’s in bite-size pieces or in a full-on fest of reading and imagining. These are Doms that you’ll want in your stocking this year.

If you like heat in your stories, you cannot go wrong with this collection which contains EIGHT full length novels. Each story is different – touching on current issues such as work place sexism, distant parenting, fear of abandonment and mental health but all require a long cool drink afterwards. Or a cigarette! Don’t miss out on this deal.
I received a free copy from Booksprout. This is my unbiased review.

This is such a wonderful engaging series of books which will give you many hours of pleasure and will drag you on a rollercoaster ride of emotions!
The members of Cuffs and Spurs club really make you wish you were part of a kinky family like this!!I
Wonderful chatacters, interesting storylines and lots of HEAs!
Brilliantly written!!!

I love the Cuffs and Spurs series, each one is so, so hot and sexy. The men are rugged and divine and the women are sweet, smart and strong. Anya Summers successfully introduces serious topics such as mental health, abandonment, fear and insecurity in a sensitive way while not demeaning the one who lives with the consequences be it a Dom or a sub. Each couple in the series is special and unique, but my favourite couple is no doubt Spenser and Meghan they are so suited to each other and so deserving of love. I cannot recommend this series enough. Be prepared to fall in love with every couple,