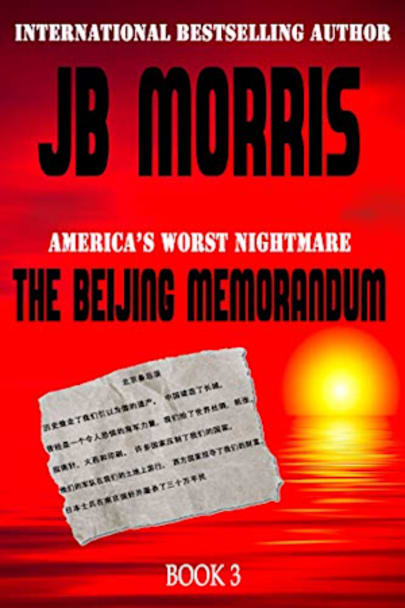 From the pen of international bestselling author JB Morris comes the sweeping wide-screen novel on the United States’ greatest strategic and military threat—Communist China. From the heavily guarded Zhongnanhai compound in Beijing, Situation Room at the White House, FBI Headquarters in Washington D.C., and the Palacio Nacional in Mexico City comes the breathtaking THE BEIJING MEMORANDUM. Former …
Former Marine Gunnery Sergeant Moses Remington. Moses knew terror firsthand. He saw it during his combat deployments in Fallujah, Iraq and in the Helmand Province, Afghanistan. He saw it again in Mexico when he stumbled across China’s secret plan.
Despite the efforts of Chinese assassins and a FBI dragnet, Moses dodged his capturers in an effort to save Consulate General Gao Quan and his family from certain execution and disclose to the world China’s secret plans.
JB Morris has proven he is a master at writing suspenseful thriller and romance novels with two Reader’s Favorite 5 star awards for excellence.

Moses swore he would never walk away from someone asking for his help…and he doesn’t. For a political thriller, this has it all. The characters…some I loved, some I loathed, and some I wanted to reach into the pages and take them out myself. The action is nonstop with intrigue and danger. Sometimes are enemies are our friends and make an unlikely but necessary ally. Five hundred plus pages of an in depth look into Moses’ world of fiction that kept be reading late into the night.

I loved the main character Moses Remington, a Marine who survived multiple deployments to Iraq and Afghanistan. Having seen the ravages of war he still had compassion for the fallen innocents. He is perfectly portrayed as an American hero, flaws and all.

Remington has a new challenge now – he has discovered China’s secret plan to overtake Mexico by murdering its president.

The story is generally fast-paced and loaded with realistic details of war and politics. With a bit over 500 pages the author carefully lays the foundation for the story and develops his characters methodically and purposefully. The horrific scenes are not presented for shock value, but rather as a meaningful tool to develop the story and expose the harsh realities our more covert forces encounter.

International intrigue, terrorism, politics – this story reflects the headlines of our world news.

Thank you to iRead Book Tours and the author for a copy of this novel for my review. All opinions are my own.

Thank you IRead and the author for an advanced copy. I voluntarily reviewed this book. All opinions expressed are my own.

The Beijing Memorandum
By: J.B. Morris

At first glance, The Beijing Memorandum is an intimidating book, and it is at that. This story is not an easy or light read, but that is because the plot is grounded in reality, thus making it more detailed. The hero, Moses, accidentally stumbles upon a secret plan created by China against Mexico. Moses sets out to stop this plan, including saving Mexican Consulate General Gao Quan and his family from certain execution. Moses cannot trust anyone, including the FBI, so he is kind of on his own. The plot is intricate, complex, compelling and believable. I could see this sort of sinister activity occurring in real life. Moses is a brave and intelligent character who is likeable for his humanity. The author obviously thoroughly researched the material, and the result is a well written action packed story. Granted, I did not care much for any political treatise because it is not something that interests me. Otherwise, the plot is a lot of military action and thrills from beginning to end. There are some bloody raw and gritty scenes that, unfortunately, mirror the horrors of reality. For the most part, I enjoyed the story and the characters, and except for a few slow parts, the pace is quick and riveting. I recommend for fans of military action thrillers that lean toward the realistic.

Do you love an international thriller filled with terrorists, international plots, politics, death, wounded characters and perhaps a hint of coming romance? Then this is the book for you. Starting in Iraq to introduce the main character – Moses Remington and a bit of what drives him – the plot goes on to span three countries, from China to the US to Mexico.

The Beijing Memorandum involves a plot by China’s plot with designs on Mexico. It was conceived and driven forward by China’s top leader who teeters on the edge of insanity. Moses caught an hint of something when he visited Mexico as a private consultant to explore business potential for a client, but he wasn’t sure what was brewing.

Slowly he becomes embroiled in uncovering the plot and neutralizing the threat, but it comes as a cost. Because of US politics, many in government side against him. He has to dodge the FBI determined as well as Chinese assassins to accomplish his mission. And along the way he is determined to save the lives of Mexican Consulate General Gao Quan and his family who are schedule for execution.

This story is not for the faint of heart. It is a dark read. Lots of blood is shed, people slaughtered by those who hold human life to have little value. And one young female assistant is badly abused physically by the Chinese leader she works for – treated as an object and used as he sees fit. Will good triumph in the end in this story? You’ll have to read it to find out.