Taking Time: … A Tale of Physics, Lust and Greed 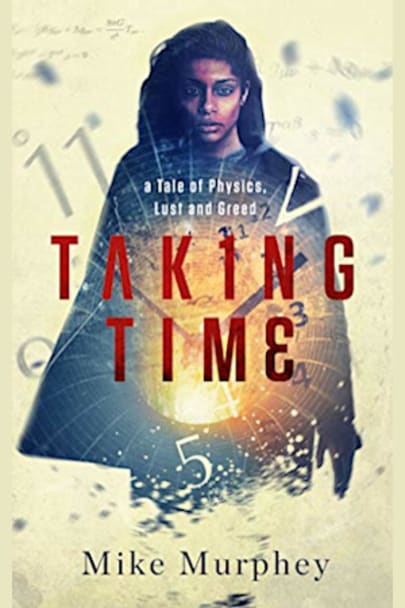 The year is 2044. Housed in a secret complex beneath the eastern Arizona desert, a consortium of governments and corporations have undertaken a program on the scale of the Manhattan Project to bludgeon the laws of physics into submission and make time travel a reality. Fraught with insecurities, Marshall Grissom has spent his whole life trying not to call attention to himself, so he can’t imagine … can’t imagine he would be remotely suited for the role of time travel pioneer. He’s even less enthusiastic about this corporate time-travel adventure when he learns that nudity is a job requirement. The task would better match the talents of candidates like the smart and beautiful Sheila Schuler, or the bristle-tough and rattlesnake-mean Marta Hamilton.

As the project evolves into a clash between science and corporate greed, conflicts escalate. Those contributing the funding are mostly interested in manipulating time travel for profit, and will stop at nothing, including murder, to achieve their goals.

This book was entered in The Wishing Shelf Book Awards. This is what our readers thought:
Title: Taking Time: A Tale of Physics, Lust and Greed
Author: Mike Murphey

Readers’ Comments
“This is a solidly written sci-fi thriller with a well-researched/developed technical element that was enthralling. If you enjoyed The Martian, you’ll love this. Although the ending feels a bit rushed, the author works hard to entertain (and educate) and, for the most part, succeeds.” Male reader, aged 62
“I think the author’s ability to identify corporate greed as a major plot element was excellent. I have no doubt if time travel was possible, greed would be a large of why it was funded. There are plenty of twists to this story, and there’s even a little humor thrown in. Very enjoyable!’ Female reader, aged 39
“If past-paced thrillers are your thing – with a little time travel thrown in – this is for you. It’s a little techno thriller here and there which I also loved. Physics happens to be an interest of mine.” Male reader, aged 48
“The time travel (and the science around it) was fab! The greed was interesting and thought-provoking. The lust was sort of annoying and pulled away from the story. Two out of three: not bad!” Male reader, aged 55

To Sum It Up:
‘A superbly plotted time travel adventure. A FINALIST and highly recommended!’ The Wishing Shelf Book Awards

Mike Murphey’s “Taking Time: A Tale of Physics, Lust and Greed” fast forwards readers about 25 years into the future.

It’s 2044, and the American southwest has more secrets than just Area 51. A secret facility deep within the desert is the site of a monumental project: Time Travel. Many government agencies and business tycoons around the globe are anxious to master this new feat of technology and reap the financial benefits. Marshall Grissom finds himself smack in the middle of the chaos when he’s asked to report to the facility by his boss. For the next five years, Marshall will be asked to become a time travel pioneer. Shy by nature and more prone to observing in the background, Marshall is thrust into the depths of the project as one of a select few participants who will be used as test subjects. His companions, the beautiful Sheila and the whip-smart, battle-ready Marta, complicate things for Marshall, as they are advised that the only way to safely transport them through time is by having the travelers be naked. As he grows closer to the two women, and becomes entrenched in a deep conspiracy involving the possibility of parallel universes, Marshall will have to watch his back and stay alert, as the corporate goons and government scientists will stop at nothing to achieve their goals, even if it means committing dirty crimes.

“Taking Time: A Tale of Physics, Lust and Greed” was a fun read simply because the concept of the book was so unique. Of course, many authors have tackled the idea of time travel before, but Murphey really adapted the idea and made it his own. The idea that in the not-so-distant future governments and big businesses might get involved in a secret mission to bring about the possibility of time travel is one that really isn’t all that preposterous these days. With the constant new advances in science and technology, it seems like it’s only a matter of time before time travel becomes a major focus, and Murphey’s tale seemed like a realistic portrayal of what the results might be. The scientists are passionate about the new possibilities and discoveries being made, while those who are funding the project and hoping to reap the financial winnings of a successful time travel project are pushing for quick progress and positive results, no matter what. Science and money seem to be two things that are becoming increasingly entangled in our modern world, which can unfortunately have some dangerous consequences.

Overall, “Taking Time: A Tale of Physics, Lust and Greed” was quite enjoyable, but I did find that sometimes the sexual innuendos and deviances got in the way a little bit. This caused them to kind of hang heavily over the action in the story, which caused the story to feel like it hitched or hit a weird curve in some places. This could be more of a personal preference, but I think that being more selective with this type of content would have increased the suspense of the story.

Readers who enjoy science fiction, time travel, mystery and government secrets will find “Taking Time: A Tale of Physics, Lust and Greed” to be a fun, fast-paced adventure that will constantly keep them asking new questions until the final page is turned.