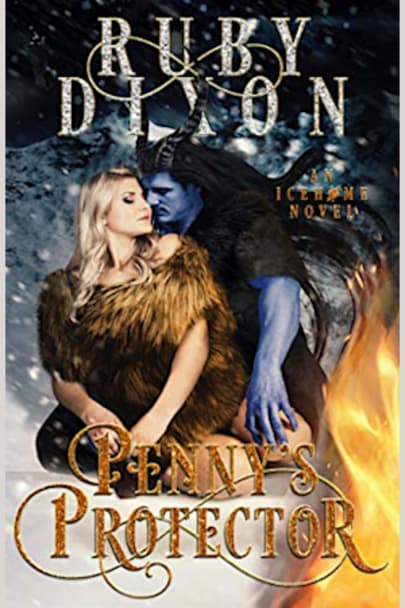 S’bren doesn’t realize what a mess he’s stepping in when he steals me away. He just wants to resonate. Sweet, right? But his methods are all wrong and resonance doesn’t look as if it’s happening anytime soon for either of us.So I’m going to use this time away from the camp as an opportunity. We’re going to go exploring and not return to the beach camp until I’m good and ready. It’s one part … part punishment for him – being my guide – and one part adventure for me. We’ll have fun, swing from some vines in the fruit cave, and then return to Icehome when we’re good and ready.

What’s not part of the plan? Falling in love. Matters of the heart are tricky when the khui gets the final say…and mine is totally silent.

I pretty much am a one-click addict when it comes to Ruby Dixon books, but this one? I don’t look too much like Penny but so feel her inner thoughts. At this point in the series, what could be boring and formulaic by now, is instead very much exciting and page-turning due entirely to the rich characters Ruby has created for us to know. Everyone in her books has felt like someone who could crash land here at any moment and be a friend. An excellent read in a long list of wonderful stories.

I want everyone to know that I have found my Ice Planet soulmate…I know, I know…thank you. S’Bren is about the sweetest guy I have ever read. Like give you a sweet tooth sweet. Penny who, am I right . The perfect naive, thoughtful, sweet and overall a genuinely great guy. No pretending, no shenanigans, just him being himself, wanting the girl of his dreams. I don’t know that I needed to read the rest of the book, because S‘Bren is a-d-o-r-a-b-l-e …..but seriously, mine, my ice planet soulmate. And, Penny who??? Kidding-ish, of all the women that were there, I am so glad he ended up with her, not sure anyone else would’ve been as appreciative of him as she was, and she really was. She knew he was a great guy, and appreciated that about him *sigh*.

S’Bren is a bit awkward aka adorable, and he is very smitten with Penny. They bond a bit when he saves her life, did I mention that? Yeah, his Penny would not of made it had he not been as attentive as he was. And like his brother…you know being the good barbarian and all..he steals her. I know, I know, but before you get too upset, know that he immediately wants to take her back, but she doesn’t want to go, instead she has him take her on an adventure…they are so cute. Seriously, ice planet relationship goals.

Safe read, with two adorably sweet people that just want to be loved, and just want each other no matter what. My heart. These two were so damned adorable. And the chemistry/attraction between these two is enough to thaw that damn ice planet. As always the language difference is always a source of amusement, but these two were fun and quirky. Oh, and we get to see what those few surprises are, great ones. Epilogue and an hea.

And…Liz is still my favorite and you know the drill…Ashtar is still a badass.

If you have read Callie’s Catastrophe you probably have been wondering what happened with S’bren and Penny. Penny was drugged and taken by S’bren so he could whoo her. He doesn’t realize how bad of a plan that was until she wakes up and explains it to him.

S’bren is shy and awkward around the females. It was kinda adorable watching him try and talk to Penny or get her attention. His attention to her doesn’t work though and she starts to get frustrated at him. M’tok and S’bren come up with the plan to drug Penny and Callie and then hide with them in hunter caves until they resonate and accept them. While drugging women isn’t cool at all, these two are doing it innocently because they don’t understand what it means to humans, nor do they understand the side effects that can happen. I didn’t love that we have aliens drugging the humans in these past two books but I know it wasn’t done maliciously.

“S’bren, in this moment, I am the happiest I have ever been. Ever. Our khuis chose each other, but even before that, you chose me.”

Penny is a romantic. She is excited for resonance because it means she will be someone’s entire world. She has been slowly getting to know all of the single aliens in preparation. After the kidnapping she takes advantage of being away from the beach and goes exploring with S’bren. Along the way they slowly start to fall for each other. I enjoyed these two and their adventures. My biggest issue was that their exploration of the areas became boring quickly and I just wanted something else to happen.

Overall, I enjoyed this couple but wish more had happened during the middle of the book.

Book ten in the Icehome series a well written story with a very good storyline the story flowed smoothly across the pages. S’bren drugged and kidnapped Penny as her wants he for his own. When she wakes up and tells him it was wrong to do that he says he will take her back, but she decides they will have an adventure even though it is the brutal season. When they find something, they as meet up with Bek and Elly who come back with them to the Icehome to bring their find there. I want to read the next book. I read a copy through K.U. and am voluntarily reviewing.

I loved this one! S’bren is THE SWEETEST male! And Penny is a positive person who doesn’t let things get her down. They make the perfect match. I loved their adventure. Penny’s Protector is a perfect winter night read. And S’bren is my book boyfriend this month. Thank you, Ruby! 5 stars!