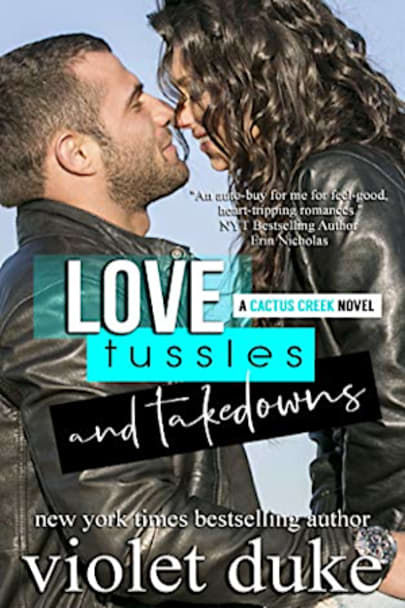 “Heart-melting and guaranteed to make you laugh and cry before you finish the last page.” — New York Times Bestselling Author Sawyer Bennett
From the author of the NEW YORK TIMES bestselling Can’t Resist series comes a fun, romantic standalone novel in the USA TODAY bestselling Cactus Creek series.
He’s a better fighter…but she has all the weapons.
After his combat injuries retire him … combat injuries retire him from the military career he wasn’t ready to give up, battle-scarred Hudson Reyes now spends his new life as a movie industry fight scene and weapons specialist simply doing what he knows best: surviving.

Until he meets her. The one woman who makes him want to live again.

An antique arms authenticator with a lifetime of martial arts training, Liana Lin has made a living turning the demons of her past into the passions that fuel, and fill, her life. She’s a scrappy little thing. A sweet, angel-faced wrecking ball to his good intentions capable of making him laugh, and turning him inside out. Hell’s bells, watching her execute that wicked roundhouse kick of hers shouldn’t be a turn-on–especially not when his head is the receiving target–but hot damn, it is. She’s a fiery, unpredictable paradox who wears her heart on her sleeve, despite the wounds he knows she has hidden as deeply as he hides his own.

Even though she’s everything he’s told himself he can’t have, Hudson can’t help but want her. Sure as sin, if one woman could sneak past the barbed wires he’s wrapped around his heart, it’d be Lia.

This is the third book of the Cactus Creek series by Violet Duke. Just like all the others, it can be read as a stand-alone, but you’ll appreciate it more knowing the characters and their backgrounds as they all run in and out of one another’s stories.

This is Lia and Hudson’s story. Lia was orphaned at the age of fourteen and was promptly brought into the Spencer family through the foster system. Her destiny was sealed after that. Especially where her three overprotective brothers are concerned. Believe me, some of their antics get pretty hilarious. It seems like Hudson has been on his own forever. Oh, his parents are still around, but they never really paid much attention to him; they never understood him. He chose a military career. A career that has just ended.

While this is mostly pure entertainment, it does reach into some deep subject matter in the form of PTSD. But mostly, it’s a fun, quick, and easy summer read. Love this Cactus Creek series!

I LOVE Violet Duke! Read all of them!

Love, Tussles, and Takedowns is the third book in the Cactus Creek series. The books are all stand alone issues with interconnecting characters. It’s a small town romance that is heavy on the humor and the heat leans towards a slow burn. This addition has all the “feels” that makes this book a five star!

Hudson Reyes is former U.S. Army Special Ops and injuries from combat force him to retire from the military earlier than he wanted. Hudson is now a movie industry fight scene choreographer and a weapons specialist. It helps him keep one foot in front of the other and fills his endless days. Until he sees the woman from his friends wedding, the woman who he couldn’t take his eyes off of and this time he will get her name.

Liana Lin is an antique arms authenticator who has trained at martial arts her whole life. Lia’s past is filled with traumatic events that has shaped her into the observant, scrappy, take no BS, woman that she is today. She may look sweet and innocent but Lia wrecks Hudson from the inside out with just one look, one laugh and brings him to his knees watching her perform that “A1” roundhouse kick of hers. Sparring with Lia turns him on like nothing has in a long long time. She’s feisty and unpredictable, has wounds that she tries to hide…just like him.

However, Hudson feels like he isn’t good enough for her, can’t have her, but he wants her anyway. Can Lia in between all the tussles take him down for a life time of love?

3.5 stars.
Story is engaging. The link around her first husband is never closed, that kept playing in my mind through Lia and Hudson’s journey.

I enjoyed this book and the author’s writing. The characters were great. The sex scenes were tame but it works for this book

This is book three in the Cactus Creek series. Another winner! I really liked Hudson and Lia. They seemed more like “real” people you would know. Their relationship was strong, and they were really there for each other. A very enjoyable book. I definitely recommend it!

Hudson and Lia’s story was very sweet. I loved the chemistry between the two. Their story made me laugh and cry. It was very touching.