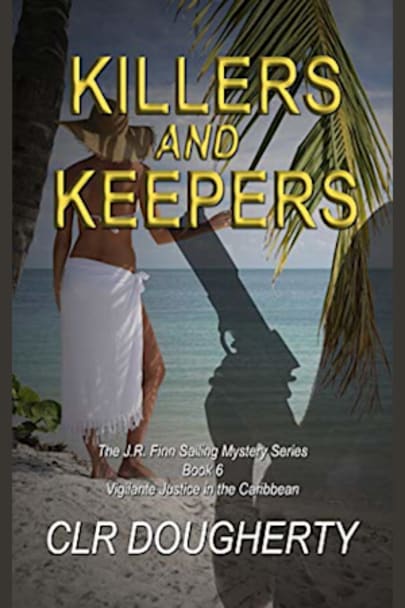 Government assassins target Finn.Finn and Mary are relaxing on their boat in the British Virgin Islands when Finn’s former employer sends a death squad to kill him. With Mary’s help, Finn makes quick work of the assassins, but he knows there will be more to come.Mary has his back, but she’s wrestling with a problem of her own. A former colleague has offered her an opportunity to … her an opportunity to take up her old career as a contract killer. The payoff is high enough to raise her suspicions, and the target won’t be specified until she accepts the contract.

Should Mary take the offer? Join them for a cruise through the islands as they look for answers.

Killers and Keepers is a fast-paced sailing adventure set in the Eastern Caribbean. It’s an exciting escape to the islands, and you don’t even have to leave home. Perfect for fans of travel adventure and sea stories, Killers and Keepers will keep you guessing right up until the end.

I received this book for free. I am voluntarily posting this review and any opinions expressed herein are my own.

One of my favorite series – with great MCs Finn and Mary. Mary has been made an offer of a million dollars for an assassination with no further details. I really enjoy the back and forth thought processes in the character discussions. I am so into this series that I find myself still questioning whether Finn and the team should really trust Mary. While I loved it, I felt that the story was wrapped up a bit quickly and neatly. Looking forward to the next in the series.

The narrator, David Bosco, is so great in this series. He, to me, is the voice of Finn.

Killers and Keepers (J.R. Finn Sailing Mystery Series, Book 6) by Charles Dougherty and narrated by David Bosco was another one I couldn’t put down once I started it. You’ll find yourself rooting for the assassins (Mary and Finn) and they are definitely keepers! Highly recommend this series if you’ve been following it or are looking for something in the genre. 4 ½ stars for story, 5 stars narration.

What’s it about? Finn and Mary are relaxing as best as two assassins can when Nora’s replacements begin to hunt Finn. From there, the fast-paced adventures begin. You get new characters and previous ones make appearances (Aaron, Island Dream- she’s a character, right? ). I love that despite this being the sixth book in the series, I still am wary of Mary and her intentions at times. As with the previous books, there is sailing terminology, but it shouldn’t be an issue if you’ve made it this far or are new to sailing as you’ve likely heard the terms before.

The narrator, David Bosco, did a fantabulous job! He brings the characters to life. There’s a nice variety of distinct voices in this book. He has a way of drawing you into the story and it’s like you’re right there with Finn and Mary. Highly recommend you give his books a listen if you haven’t.

My only complaint is sometimes the logistics are explained a little too much in the beginning of the book (what’s said doesn’t need to be said as Finn and Mary have went through similar things before/they’ve worked together enough that it shouldn’t need to be said with as much detail), but at the same time, it’s part of what makes the book and you should def be listening to this series.

Overall, I highly recommend this series for sailing and mystery fans, or if you’re just looking to expand into a new series. I love it and am going to miss Finn and Mary when their adventures are over (hopefully not for a while).

Potential spoilers below****You’ve been warned***
*****
***
*
Parental guidance/trigger warnings: The main characters are assassins- there is some violence and death (nothing over the top or gory details). Mentions of sex trafficking, using women for sex, abuse of women, drug cartels. Language used: Sx9, damn x9, hell x8.

*I was given a free review copy of the audiobook at my request and have voluntarily left this review. Thank you for allowing me to listen and review the book!