If We Ever Meet Again (If Love Book 1) 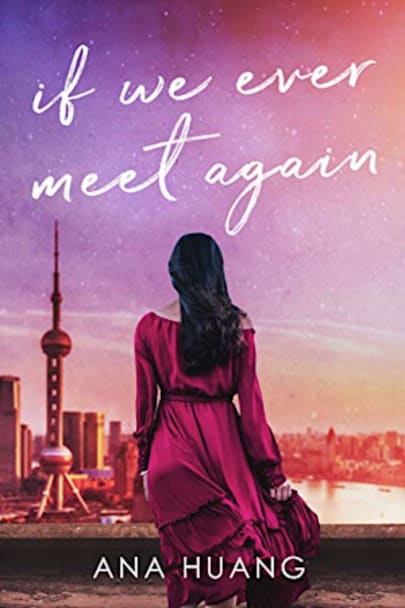 One year, two opposites, and a love that will blindside and, ultimately, shatter them.
She’s an aspiring interior designer who dreams of falling in love.He’s an ex-football star who thinks love is a con.
She’s a virgin, and he doesn’t do virgins.He’s cocky, infuriating, and not her type.
She wants the fairytale.He wants freedom.
Blake and Farrah shouldn’t have fallen for each other the way they … freedom.

Blake and Farrah shouldn’t have fallen for each other the way they did: totally, completely, and irrevocably.

Because they’re studying abroad in Shanghai, and they only have one year.

Because forces at home threaten to rip them apart, even if they don’t know it yet.

And because, eventually, they must face the most heartbreaking lesson they’ll ever learn:  sometimes, even the greatest love can’t conquer all.

WARNING: This is the first book in a duet. It’s a full-length novel with no sudden cliffhangers, but Blake and Farrah’s story continues in book two, If the Sun Never Sets (due out July 2020), which takes place five years later. HEA guaranteed in the second book!

If We Ever Meet Again is a slow burn, New Adult contemporary romance. It contains profanity and adult content. Recommended for 18+.

This was a sweet and charming story and I liked the feeling of diversity that was portrayed through the story. Farrah and Blake meet during a foreign year abroad study program and they end up falling completely for each other. I loved experiencing the culture and scenes of Shanghai through their eyes. Ms. Huang does a fantastic job of bringing the story and characters to life through her writing and vivid descriptions. I could really feel and see what the characters were experiencing. It was easy to completely immerse myself in the story and shut out everything else. The storyline flowed nicely and the plot was well-developed. This was my first time reading something by this author and I really enjoyed. I will be looking for more of her books to read.

Ana Huang’s If We Ever Meet Again is an emotional and realistic story of first love. Set during a year abroad program in Shanghai, the novel focuses on Farrah and Blake, two young and relatable characters. I adore the slow-building romance between Farrah and Blake! It is deep and true (and pretty steamy), and filled with good and not-so-good moments. Set against the amazingly described setting of Shanghai, their blossoming romance is wonderful and heartbreaking and is filled with happiness, exploration, confusion, and disappointment.

Farrah and Blake are so different yet so alike. She’s innocent, and he’s experienced. Blake is a popular college football star bound for the NFL, and Farrah is a hard-working college student working toward a career in design. She has plans for her future, and he’s still trying to figure out his life, especially since he left football for good. She has strong support from her mother, while Blake maintains a strained and distant relationship with his parents.

However, Farrah and Blake are both intelligent and part of a wonderful educational program. They are both funny, helpful, and strong. Farrah and Blake also share family issues, regrets, and insecurities. I love how well they connect. The way in which their story develops is fabulous, and the emotional connection that they have is swoon-worthy! The way that they encourage each other to reach for their goals is beautiful. They see promise in each other and don’t feel the demands and expectations they left in America. I like how they boost each other up and support each other’s dreams.

Farrah and Blake have a passionate love affair that I wholeheartedly rooted for. They meet by happenstance as if fated to be together. Unfortunately, life gets in the way and causes problems for Farrah and Blake. I cried for their troubles and heartbreaks and laughed at their silly moments. I became totally invested in these characters and their experiences while studying abroad and falling in love.

I particularly like Huang’s vivid descriptions of Shanghai and other locations in China. I felt like I was strolling the streets with the characters, exploring new places with friends, eating and enjoying myself in Disney Land, and even standing at the top of a building waiting to bungee jump with Farrah and Blake. The imagery used when the characters visit the Great Wall of China and other popular attractions paints a captivating picture and adds to the romantic atmosphere.

I also liked the secondary characters in the story. Farrah and Blake have a core group of friends that they spend time with. The witty banter is realistic and funny, and it is clear the group had a great friendship. Farrah worries that the family she formed while in Shanghai won’t last past their year abroad, but I suspect (and hope) that Kris, Olivia, Sammy, Leo, and the others appear in the next book.

If We Ever Meet Again is a wonderfully developed, character-driven story that depicts the beauty of falling in love in a foreign land and the heartbreak of facing reality and making poor choices. The richly detailed setting, the fantastic characters, the love story, and the poignant messages about friendship, family, loss, and finding oneself make for an immersive read. I can’t wait to read the second book to see what happens to Farrah and Blake in the future! Thanks so much to the author for a copy of the book in exchange for my honest review.

Oh my goodness this was such a fantastic read, we get Blake and Farrah studying abroad in Shanghai this was a slow burn with funny witty banter the secondary characters were great as well as the writing I ate this book up. This book will have you rooting for the MC as well as break your heart for them. I don’t want to spoil it but I need book 2 now. That ending left me wanting more.

Thank you Hidden Gems for gifting me a copy of this book in exchange for a review.

I didn’t know what to expect going into this book then I started it which was when I figured out it was written in third person. I only read a few authors that write in third person and Ana Huang has been added to that list.

I first fell in love with the setting of the book so many books are written and most books that take place in big cities are generally the same big cities so this book taking place in Shanghai was a refreshing new atmosphere.

The prologue was when this book hit me in the feels and my heart broke for these characters that I didn’t even know yet.

The connection between Farrah and Blake was instant but the relationship wasn’t until after they became friends and I loved that it was a slow burn. I was right there falling in love with them. They had my feels all over the place from swoon to wanting to knock them upside the head and complete heartache.

The secondary characters were endlessly entertaining with all the different personalities that you wouldn’t think fit but they formed a family and the love they had for each other could be felt in the words.

I’m looking forward to the next book with Farrah and Blake’s story and I’m also hoping for more of the other characters in the future.

When I picked this book, I wasn’t sure what to anticipate. I was skeptical about writing style and plot, but this book surpassed my expectations and turned out to be a nice light read. This is the first book I ever read where main protagonist is American born Chinese (ABC – learned about this term in this book ).

Prologue almost tells the entire story but how it happens is narrated so well. Farrah and Blake meet in Shanghai as a part of FEA (Foreign exchange program), a yearlong study abroad program. Farrah has defined her path well and wants to be an interior designer. Blake and ex- football star, has left his football career and wants to figure out his future post this year.

I liked the collage setting and the group of friends. Those secondary characters were the outstanding feature of this book (so many and exactly like collage group of friends). Love story between Farah and Blake is mediocre but it compensated well with writing and dialogue delivery style. I could see the twist and turning coming from far away, yet intriguing enough to turn pages.

The cultural setting of Shanghai is what made me clasp to this book. This book definitely made me to add Shanghai in my list of places to visit. Macau and Disneyland of Hongkong were already in my bucket list, this book made Macau come out on top. Totally loved the virtual tour of great wall of china. Food descriptions were scary for me as I’m born vegetarian, people who enjoy different cuisines may like it.

All in all, it’s a good one-time light read with a different cultural setting. It doesn’t end with a cliffhanger but their story continues in book 2. Glimpse of book 2 was intriguing enough, let’s see what author has in store for Farrah and Blake.