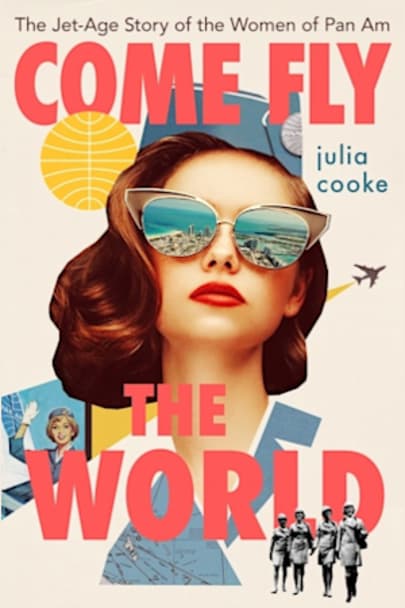 Glamour, danger, liberation: in a Mad Men–era of commercial flight, Pan Am World Airways attracted the kind of young woman who wanted out, and wanted up Required to have a college education, speak two languages, and possess the political savvy of a Foreign Service officer, a jet-age stewardess serving on iconic Pan Am between 1966 and 1975 also had to be between 5′3” and 5′9”, between 105 and 140 … 5′3” and 5′9”, between 105 and 140 pounds, and under 26 years of age at the time of hire.Cooke’s intimate storytelling weaves together the real-life stories of a memorable cast of characters, from small-town girl Lynne Totten, a science major who decided life in a lab was not for her, to Hazel Bowie, one of the relatively few Black stewardesses of the era, as they embraced the liberation of their new jet-set life. Cooke brings to light the story of Pan Am stewardesses’ role in the Vietnam War, as the airline added runs from Saigon to Hong Kong for planeloads of weary young soldiers straight from the battlefields, who were off for five days of R&R, and then flown back to war. Finally, with Operation Babylift—the dramatic evacuation of 2,000 children during the fall of Saigon—the book’s special cast of stewardesses unites to play an extraordinary role on the world stage.

OK so no lying here…the main reason I bought this was the old-time vibe of the cover. I then read the synopsis and it sounded like a winner. Sadly it was more flop than love…

While I did enjoy some parts of this, it was mostly frustrating. Going into this one I thought that it was supposed to be about the ladies of PanAm, their lives, and the struggle with working in a man’s world. While it is partially about this, the book also goes off on several different paths, sometimes within the same chapter.

Speaking of chapters .. these are extremely LONG and most often didn’t flow well or make any sense as to the content layout. I was often confused and had to go back and look to see if I missed something. Then later, in the same chapter, it would pick back up where it previously left off when I became confused…

After multiple times trying to sit down and read this one I grabbed the audio and finished it that way. It was still often jumbled and made no outline sense but it made it WAY easier to finish.

I’ve seen some rave reviews on this one and honestly I don’t get it. Some parts were interesting but the jagged flow and long chapters made it hard to fully enjoy. If this one is on your radar though, don’t let me dissuade you! You may enjoy much more than I did.

I read this book over a two-week period while moving from Hawaii to Connecticut, and it was perfect. I can count on one hand the number of Non-Fiction books I read in a year, but this was the best book to read while traveling across the country.

There’s no story or plot to follow, and this book requires pretty much zero thought. It’s the history of Pan American Airlines from the ’60s until it folded in the ’90s.

The book also loosely follows three stewardesses and their journey within the Pan Am company.

Overall, I really enjoyed this! I absolutely loath flying, but I’ve always loved the class and glamour of the Jet-Set age. When flying was an adventure, and people dressed for the occasion instead of showing up in sweat pants and pajamas as they do today.

If you have any interest in Pan Am or the golden age of air travel, then I absolutely recommend this book. There are a few chapters that get a little bogged down with information that can be boring, but as a whole, it’s was a really good story.

This is an entertaining read, I was intrigued with the retro book cover. The book is about the Pan Am World Airways stewardesses from the 1960’s and 1970’s. The author introduces us to Lynn, Karen, Torie, and Hazel – why they applied and their lives during Pan Am. I learned about the culture & fashion, and how Pan Am and the stewardesses were instrumental during the Vietnam War transporting soldiers from the battlefields and Operation Babylift.

Come Fly the World by Julia Cooke centers on the Stewardesses (Clare, Tori, Lynne, and Karen) of Pan Am starting in the late 1960s when air travel was beginning to be more accessible and depicted a hip, jet-setting lifestyle. The rampant sexism noted is cringe worthy but unfortunately, completely expected. That said I did really enjoy learning about the training these women went through – simpler, domestic type things like how to carve a roast while in flight (what?) to keeping calm during a hostage takeover and their travel adventures.

The historical backdrop – Cuban missile crisis, the Viet Nam conflict and refugee flights, the fight for equality: both the civil rights movement and the birth of the National Organization for Women are also interestingly discussed. The possibility of their plane being strafed by ground fire, watching firefights and napalm drops while flying troops into Da Nang or meeting diplomats was not unusual. Stewardesses were some of the first to file suits with the EEOC, wanting to keep their jobs after they married or “aged out.” Stewardesses worked under extraordinary circumstances! Smart, brave, and determined these women may have started off just wanting to travel the world but they became ground breaking, career driven women who led the way.

Thank you NetGalley for this ARC copy – wonderful read.

I love the cover! It has a really glam, yet retro look to it. It brings to mind all the great things you associate with air hostesses. This cover certainly attracts your eye to it and encouraged me to think that the book would be from the point of view or at least solely about air hostesses.

The book does follow a few women, Karen, Lynne and Tori being the ones that stay in my mind. All these women have to fit/fill certain expectations such as weight and looks which would most likely be frowned upon, in the era we live in now.

The uniforms, rules and expectations varied slightly depending on which Airline the women worked for. Though this book is centred more on the Pan Am Air Hostesses it does reference other airlines too. Pan Am ran “grooming classes” which one of the ladies featured in this book called Karen wrote home about to her mum saying the course would cost £500!! Karen also revealed to her mum in the same letter that she had never known that blue eyeshadow de-emphasized her blue eyes — she should choose a greenish hue — or that a hint of a bright white below the eyebrows would highlight the arch. One of the grooming supervisor’s had reshaped her eyebrows, and they now looked so much better. In 1969 the spring trainees were the very first ones to be allowed to keep their hair long but it was on the condition they should keep it clipped neatly at the nape of their neck. This new freedom didn’t bother Karen as she had her hair cut into a bob, the same style she has worn it in during her time working for the US Army.

The women were also given four pages of “packing tips” which contained gems like building a core wardrobe in drip dry fabrics as they are easier to manage and do not need a lot of extra work ironing. The tips also contained a note on wearing comfortable shoes!

The Pan Am Stewardess manual gave advice on things like lip shape, lipstick/make-up application, correct posture, skin care, and haircuts. It says in the book that these grooming lessons took nearly as much time as the first aid training!
For makeup, a natural look with red, rose red or coral for lips and nails. Pan Am wanted their hostesses to look pretty, feminine and sophisticated. They employed people to ensure the stewardesses were meeting their specific guideline. If a stewardess wanted to change her hair, she needed to have permission from the airline. Stewardesses were expected to have clear skin, be between 5’3 and 5’9, and be willing to follow the rules. The stewardess skirt had to be exactly one inch below the knee, so it doesn’t raise and be too revealing when the stewardesses were reaching over head lockers and doing their jobs on the plane.

The book also covered difficult journeys the Air Stewardesses had to cope with such as transporting young men from America over to fight the Vietnam war. Also, the evacuation effort made and how integral the Air Stewardess’ willingness and professionalism to come up with solutions as quickly and efficiently as possible. The conditions these air hostesses had to cope with in the air whilst helping ill, scared children was awful. I should imagine if this occurred in the present day the Air Stewardesses would be treat for a form of PTSD. Not in those days though they were expected to pick themselves up, put a fresh smile on their face and continue on.

The book also covers some Airline history and also the many lawsuits for women’s rights, for job progression etc, and men’s rights to become Air Stewards, sexism, racism etc. Some of the articles covered were ones that I honestly wouldn’t of necessarily thought of. I guess in the present day we take a lot for granted, as being our rights to have/do.

I’ll totally admit I really enjoyed all the Air Stewardess grooming and training details, it would have been great to have some photographs or illustrations too. I even found the military filled flights fascinating to read about, and the evacuation of orphans though harrowing it was something I wouldn’t necessarily of thought of the Air Stewardesses having to do. Some of the Airline history in places felt a tad long winded and I could feel myself losing interest, but luckily the different chapters are kind of mixed up a little with the more serious history, regulations interspersed with anecdotes from actual Air Stewardesses.

My immediate thoughts upon finishing the book were quite mixed, though I found parts of the book really interesting others seemed to drag on in minute detail on things I didn’t find particularly noteworthy.

To sum up I really enjoyed some parts of the book yet felt some parts were somewhat drawn out in my opinion. It wasn’t exactly what I was expecting . . . but it was still an okay, fairly interesting read.