Claimed by the Demon Hunter 3 (Guardians of Humanity) 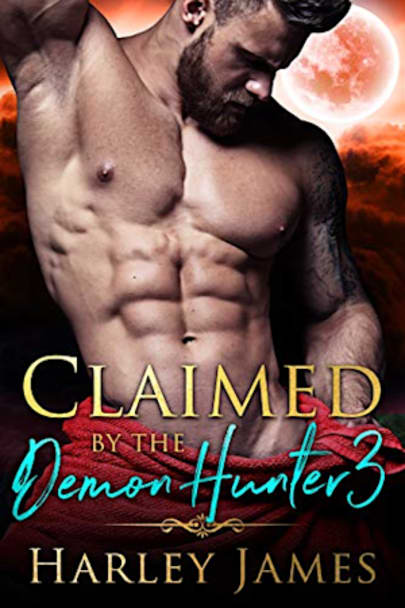 He’s too broken to love. Thankfully she knows how to fix things.Fire Guardian Spencer Jameson has walked the earth for 400 years too long. A proper English rogue with a list of bad deeds long enough to impress Satan.His days of saving humanity were done, until Sydney came along…The curvy and sassy mechanic with enough spunk to put him in his place. They’re an unlikely match, but Spencer is used … unlikely match, but Spencer is used to claiming what he wants.
Sydney isn’t having it. She can fix most things, but Spencer is a mess.
A mess that she hates herself for loving.
So when Satan’s son uses Sydney’s family in a bid to unleash hell on earth,
She has no choice but to trust the smooth-talking scoundrel.

Unspeakable evil is near.
Armageddon, a heartbeat away.
They need to set aside their uncontrollable attraction to save humanity,
But it’s a test that could make the world burn to ash.

Settle in and buckle up. This ride is about to get bumpy.

Sexy meets magical in this steamy full-length, stand alone novel. No cheating, no cliffhangers, and happily ever after guaranteed! This is book 3 of the Guardians of Humanity series. Books do not have to be read in order.

This is the third book in the Guardian of Humanity series and for the opening passages it does not dissapoint. This book takes you in to ther world of the angelic guardians, fighting demons who have over taken a human's body.

This face pace saga grabs you in the seductive storyline and leads to the twist and turns of intrigued, drams, survival, fear, and love as Sydney and Spencer find each other and end up battle they did not want.

This is a great addition to the series

This book pulled me in and kept me entranced till the end. The feelings of love, hate, and pain coming out in waves making you want to cry while you read. This was such a beautiful book! I loved the characters wholesomeness!

Fire Guardian Spencer Jameson has lived for centuries and has a long list of bad deeds that would impress even Satan. But he was finished with saving humanity. And then he met the feisty Sydney who wouldn’t accept his nonsense and easily put him in his place. Now with danger all around that could turn the world to ash, she has to put her trust in the broken man and try to save humanity!

This story will captivate the reader from the start and includes everything from action and battles against evil to romance and falling in love! Add in the unexpected twists and turns and the reader will be on the edge of the seat until the last page!

This was a great read with characters that are well developed and engaging and have chemistry. The storyline is well written and flows smoothly from page to page.

This was a hard book for me to get into because I don’t think it should be read as a standalone. The first 2 books may have set the tone and given context that I didn’t have. So, I have added to my TBR Book 1. That said, Spencer and Sydney certainly had chemistry and were interesting characters. I found they were in their own heads a lot, which bogged down the story’s pace for me. I really wanted to like this book more than I did, but it was just OK. Maybe after I read the first 2 books, I’ll re-read.
I received a copy of this book from Bad Boy Update and this is my honest review.

I love Spencer’s story! He is fine being a brooding Guardian knowing he isn’t worthy of finding a mate like his friends. Sydney’s whole world is her repair shop, and her friends. Her friends are determined to get her out for her birthday and they end up at Spencer’s club. The moment their eyes meet the sparks fly, but Sydney is determined to be her own person and go home alone. Spencer is used to getting what he wants, and he wants her. He won’t give up, and she wants to give in….and things get hot and heavy until literally all hell breaks loose! I love their story and they wade through their personal demons and learn to trust each other so they can become who they were always supposed to be.

Sydney, master mechanic, meets Spencer, Unholy Inc. partner and Guardian, when she goes out to his nightclub on her birthday. As the story progresses a flame flickers, a wild goose chase to put out fires ensues, and once the smoke clears they may survive if they accept themselves warts and all. Harley James’ third installment of her Claimed by the Demon Hunter is a wonderfully crafted magical urban fantasy read with a supernatural romance spin. I look forward to the next Guardian’s story.

I received a free copy of the book from the author via Booksprout. I had the opportunity to review or not.

Book three in the Guardians of Humanity series a well written story that I was not putting down until I finished. Fire Guardian Spencer Jameson and mechanic Sydney Ashby’s story, there is suspense, drama, danger, magic, and romance. I want to read the next book. I received a free copy of this book via Booksprout and am voluntarily leaving a review.

What a good book! Spencer has been on earth for 400 years and quite frankly, is tired of all of it. Sydney is a mechanic and owns her own shop with an all female .crew. But when the two of them get together, fireworks!

Sydney Ashby is a young woman who is mostly interested in her business and her families welfare. Her friend Laura comes and takes her out on her birthday to club Inferno where she runs straight into the club owner Spencer who is trying to breakup a unauthorized sexual encounter right in the middle of the club and that is why Syd ran into him because she couldn’t take her eyes off the couple. Spencer was absolutely taken by the young woman that ran into him he couldn’t stop thinking about her and from then on he was convinced she was the one and he hadn’t felt that way in at least a hundred years. Great Story line and the characters were very interesting. Enjoyed the adventure, lots of action, suspense and romance. I received a free copy of this book via Booksprout and am voluntarily leaving a review.

Supernatural on steroids with soulmates – scrumptious!
Claimed By The Demon Hunter Book 3: Guardians of Humanity by Harley James is a very well written supernatural/paranormal romance. This book is my introduction to this series as well as this author and I am so glad that I read it! It tics all the boxes for an awesome book for me. Complicated, complex, creative plot, amazing characters, suspense, danger, steamy chemistry, a HEA and an open ending for more adventures.
Spencer, the wounded, negative self-fulfilling prophecy brooding and moody Guardian alpha has the biggest heart and despite his insistence that he is the most selfish man to ever live, he is really quite the opposite. Sydney is the heroine of this book. She is thrown into this unknown reality of archdemons, lower demons, angels, and guardians, etc., suffers many bouts of panic and frequently finds herself in danger. Spencer and Sydney seem to have a connection, but even most obvious is their chemistry despite the many interruptions. As they are forced to spend time together, the connection becomes more pronounced as the trust and feelings develop.
The antagonist is the devil incarnate! He is a Super Villain ultimate bringer of chaos. This archdemon kept me turning the pages, holding my breath and sitting on the edge of my seat biting my nails just waiting for him to get his overdue butt kicking! Spencer and Sydney totally deliver with the help of others too.
Overall, a great book I enjoyed reading so very much and has created a need to read the first two books and all the books that follow. I love that despite the darkness, there’s a bit of light in this series with HEAs and lead ins for the series to continue.
I read an ARC of this book from Booksprout and voluntarily share my review.

The plot was great and the interesting characters grabbed my attention from the very beginning and wouldn’t let me go until the turn of the very last page!

I started this book in the evening and couldn’t stop reading until the end of it. I was enraptured by it. The flow of the book was like liquid it just moved smoothly between all of its parts. The storyline was wonderful and I just love the characters. Now I haven’t read the first 2 books or the prequel so I can’t really say if you have to read them to understand this one, I don’t believe so because I had no problem following along. I never once felt like I was missing anything from the ones previous to this book. I love Sydney with her sass and questioning of everything not too mention her love and compassion for her family and friends it seemed like it could be something infectious. And what women wouldn’t want to find that particular Guardian, Spencer, in her, ummm, life. He seems like he couldn’t a bit aggressive but at the same time very loving plus he is damn sexy. I also loved that Harley James made Sydney a mechanic, not only is she a mechanic but she owns the whole shop and almost all women work there. GO GIRL POWER! Talk about feeling empowered by not only a strong female lead character but by also all the supporting characters.

I was also quite impressed with the writing. It isn’t often when I find something that literally will make me keep reading until I’m done and stay awake long enough because I have to get it written down right away for my post; all because of how frickin’ excited I was about the book. Weird, right? Yeah I know but it was a really good book that makes me want to get the others as soon as I can and read them.

This is a story between good and evil, angels and demons, dark verses light. The plot was interesting and had me hooked from the very beginning. The storyline flowed smoothly throughout. I couldn’t put it down once I started reading. Even though it’s book 3 in a series it is a standalone. The characters were well-developed and easily relatable. The chemistry between Spencer and Sydney was off the charts! The story is well written though there was a few proofreading errors. I can’t wait to read book 4 plus I’ll definitely go back and read books 1 and 2.

I voluntarily read and reviewed an ARC of this book.

The author has brought back some of our favorite characters and introduced others that we can care about. The story is spell-binding and keeps you intrigued until the very last paragraph.