A Step Through The Empty (The Vis Remaining Trilogy Book 1) 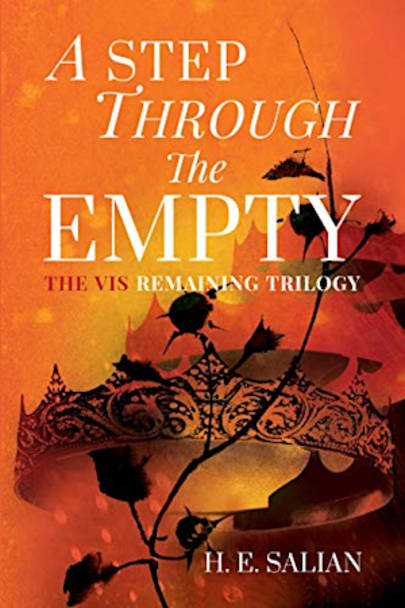 King Bry’s arranged marriage does not end with war. He would consider that an unexpected success, but as an old threat resurfaces, it may be short lived.Princess Stori settles into a new life with Bry and tries to keep up with the chaos of ruling a failing kingdom. She learns to navigate who to trust, who is dangerous, and who is going to drive her nuts.In another world, an assassin has betrayed … has betrayed his master, hoping to aide the king he is ordered to kill. Though, he is more desperate to protect his other secrets.
The calm before the storm doesn’t last long as the appearance of a hacker changes the game for everyone involved.

A great debut novel!
At first it was a bit confusing to place the characters in time and space.
First we met a king and his daughter, the princess, traveling in carriages to meet her betrothed. But then the king takes his tablet. In that moment the way I imagined their clothes and surroundings went overboard.
Because I usually see images while reading I need some guidance to find the accurate image related to the story.
Later on we see sword training, people wearing cloaks, but also portals to another worlds and hackers from Terra.
At this moment my guess is that this is a combination between fantasy and a little science fiction.

After a few pages I got my wish and Shad explains how this universe works. It’s so cool

It’s a very complex first novel, meant to put in place the pieces for the next two books, with great world building and characters very well presented.
The story is like a puzzle. With each chapter we discover another and another character and we try to understand their purpose and place in this whole universe.

At first I thought that Bry and Stori were the MCs but after some more chapters it is clear that the story follows at least six characters but my favorite is Shad!
His heart is so pure and full of love for the ones he cares about. He also a little insecure and still trying to accept his true nature and troubled when he is judged solely by that. But despite this he is the first to brighten the room with his funny way and his jokes. I absolutely love him he is perfect and really wish to see some art with him to see his blueish skin with moving shadows and electric blue eyes

It’s clear that Bry is still adjusting to his new role as the king. Not very fond of petty pleasantries and yearns to be back in the action. He has a lot to learn about ruling and he is determined to be the opposite of his father in every way. Cares for this people and the kingdom and surely will become a great king given time.

Stori is smart but she lacks so much self confidence. Sometimes she is so caught up inside her head judging every little step she has done wrong and thinking that she will never be a good queen, but it’s clear that just because of this she will be. In my opinion a good ruler (and not only that, a good person in general) must always consult with his inner self first and analyze previous actions and find a way for improvement. She has to stop though with the self blaming and thinking about her as inferior, because she is certainly not so. Her actions proved that plenty.

Here we won’t find the good and the bad painted only in black and white. And as you go through the book you will get to understand their actions and even like some of the characters that were initially on the other side of the barricade.
We have pure evil in the form of the sadic and monstrous Duqa; Atanas – the one acting in revenge (this is what I believe so far); Loreda who fears for her and her loved ones safety and is still terrified of her last husband; Dain who took the job out of necessity and Sverre who literally had no other choice.

The last one, Sverre grew so much on me as the story developed. He is a strong man, both physically and mentally. He saw all the bad things in the world and most of the bad things were acted upon him. But even that couldn’t change his good heart which still allows him to care for others and maybe even love.

These being said I believe that this story has all the necessary qualities in becoming a great trilogy.
Hope you will enjoy it much as I did and can’t wait to read the next one.

Please consider the following triggers if you know you are not comfortable with: violence, children being harmed, description of treating wounds, slave trade (people being sold), arranged marriage with a minor, fight scenes and also a war takes place with all that involves a war (more fight scenes, injuries, casualties, etc.)

To end this in another note
Fun Fact: Vis in romanian means dream. But in this case I relate vis to magic, that’s how I imagine it

I received an advance review copy from BookSirens, and I am leaving this review voluntarily.