A Secret History of Witches 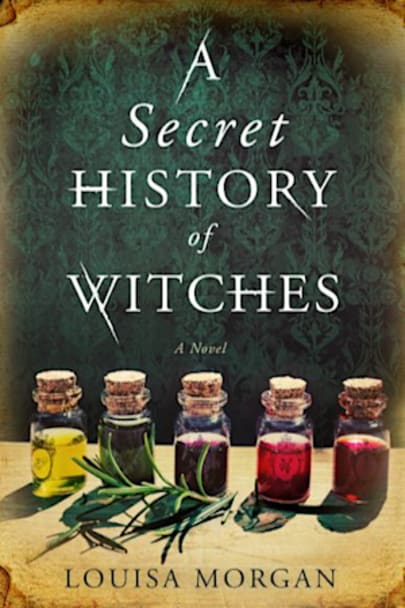 A sweeping historical saga that traces five generations of fiercely powerful mothers and daughters – witches whose magical inheritance is both a dangerous threat and an extraordinary gift. Brittany, 1821. After Grand-mere Ursule gives her life to save her family, their magic seems to die with her. Even so, the Orchieres fight to keep the old ways alive, practicing half-remembered spells and … practicing half-remembered spells and arcane rites in hopes of a revival. And when their youngest daughter comes of age, magic flows anew. The lineage continues, though new generations struggle not only to master their power, but also to keep it hidden.
But when World War II looms on the horizon, magic is needed more urgently than ever – not for simple potions or visions, but to change the entire course of history.
“At once sprawling and intimate, A Secret History of Witches deftly captures the greatest magic of all: the love between mothers and daughters.” –Jordanna Max Brodsky, author of The Immortals

I absolutely Did Not Want to put this book down. I delayed the last chapter as long as a could. Definitely became a favorite read. Would recommend.

The story was good enough for me to read through the whole book. The various characters that continue were interesting, the overall story was worth reading. But there was just something that was not quite there, maybe because the story is more like a compilation of short stories of different witches even though they are of the same family. I wish there was something little more.

“A Secret History of Witches” written by Louisa Morgan follows five generations of women, starting with a really cool Gypsy Grandmere who protects her Romney family with her magic. In the families, it is a woman who inherits most of, if not all of, the magic. The story follows Orchiere line of witches through many generations. These crafty ladies all seem befuddled when their “old fashioned” mothers impart the secret old religion. They all want to flout their forebearers’ warnings and are surprised by the witchcraft.

This book is more of a multi-generational look at mother-daughter relationships than an in-depth look at witchcraft or at history. The early incarnations of the Orchiere witches seem to share a dour resolve about their powers, and it isn’t until one defiant beauty decides she’s going to use her magic to better her station in life. Although she makes a terrible daughter, mother, and wife, she is one of the stronger personalities in the book. During WWII, an orphaned daughter discovers the Orchiere line isn’t the only family to produce magical women.

The overarching theme of this book is women must hide their power, or men will feel threatened and in their fear will harm them. The women claim the spotlight, with all other characters for the most part inhabiting the fringes. The “familiars” were varied and interesting, too, and the way magic worked, with its “cost” and familial ties, presents a mythology on which to grow.

An epic journey through five generations of fascinating Orchiéres women spanning more than a century filled with secrets, illicit affairs, sacrifice, jealousy, and witchcraft. The journey begins in 1821 France, the Romani clan fearful after hearing another poor woman burned as a witch. In danger, Grand-mère Ursule directs her family to cross the water to an island far away and begin life anew, then using her last breath hides them from the notice of an angry mob bent on killing. When morning comes, the family prepares to flee leaving behind a freshly made resting place for the great witch that had protected them, saved them, and shared with them their future lay miles away. Leaping forward to 1834, “The Book of Nanette” shares the life, love, and magic of the now young woman who had been devastated to leave her grand-mère behind. She learns the way of her sisters, and after a night with a handsome stranger, she is blessed with a daughter she names Ursule to honor her grand-mère. The lineage continues from Ursule to Irène, from Irène to Morwen, from Morwen to Veronica; each of the women are tied together by their ancestry, their witchcraft, and the crystal that has a power only they can manifest along with individual strengths and talents, desires and dreams, acceptances and denials, and differences that make for an intriguing family history and personal journeys.

Brilliantly woven through the lives of five women and the eras in which they lived, Louisa Morgan has provided an extraordinary tale of love, sacrifice, family, and magic. Although the women are all witches, they differ in how they embrace their powers, use it to their advantage, and share it with their daughters. The drama does not focus entirely on the witchcraft element; it is part of the women like a religion, kept from the view of outsiders, secret, but my personal enjoyment came from the fascinating personalities, everyday life related to the era, family interactions, and how they related to those around them. The book is organized into five “The Book of…” focusing on each woman through a third-person narrative. Louisa Morgan’s writing style does well to envelop the reader by illustrating the various settings, environments, and lifestyles through descriptive language as well as the tone and personalities through the expressive dialogue. Entertaining. Engaging. Epic in a way I didn’t want my journey to end. Is anyone listening? Book Two…five more women spanning another century to arrive at today?

This book isn’t plot heavy. It’s a generational tale of witches that—though a slower read—had me fully intrigued to see how the story played out. The audio is wonderful.

This multi-generational story of a family of witches gets steadily better as it goes along. The history feels real without bogging down the story. And while the early chapters are so packed with exposition and move so quickly through time, it’s hard to really hook in to those characters, by the end, I was right there with them. And the very satisfying conclusion had me in tears. A good read at the crossroads of Phillipa Gregory and The Mists of Avalon. The Mists of Avalon

I loved this book!

I liked this book a lot. Some of the negative reviews claim it’s the same story repeated over and over again, but I disagree for two reasons:

1-True, every girl presented in the book finds herself in the same situation, but they do with it is completely different and this affects their lives greatly. Ultimately I found this intriguing. Happiness does not depend from your circumstances (we all have tragic and happy instances) but it comes from finding an inner balance.

2-The historical context changed for every character.

The book is very well-written. I thought it was a charming read.

Enjoyed this book immensely. Written very well, characters stood out and you couldn’t wait to get back to them. Historical, relatable, great family saga!!

A Secret History of Witches by Louisa Morgan is a historical novel that starts in 1838 at Orchard Farm. The Orchierres families magic seemed to wither with the death of Grandmere Ursule. Her descendants keep following the practices she established that have been handed down from mother to daughter. They have Ursule’s magic crystal and grimoire. Some of them can do simple spells, simples and charms. Nanette, Ursule’s granddaughter, is the first one to blossom with real power. Magic, though, always comes at a price. Follow the magic through the generations to see what happens to the Orchierres line of witches.

A Secret History of Witches was a slow-paced novel that I found lacking in magic. The story had potential, but it was never achieved. Each generation seemed to make the same mistake (it seemed like the same story repeated over for each generation—the author just changed the clothes or words to fit the time period). I thought it would be a story about strong, female witches (instead we have women that grow up, get pregnant, pass on family history and repeat for the next generation). Unfortunately, the only strong person was Gradmere Ursule (and she was dead). The woman and men were stuck in their gender roles and they were conventional. The magic elements were uninspiring. For a book about witches and magic, it was deficient. The characters lacked development (they were flat). Some sections were more complete than others. I was disappointed in the ending (it was unsatisfying and felt unfinished). I did not understand why the author did not bring the book into modern times and bring the witches full circle. She could have shown them back in full power in modern times. The book needed some oomph. My rating for A Secret History of Witches is 2 out of 5 stars. There is some good writing and the author did her research for the historical periods featured. My favorite section the World War II with Veronica Selwyn. If you are looking for a magical novel, check out Deborah Harkness’ All Souls Trilogy (vampires too)!