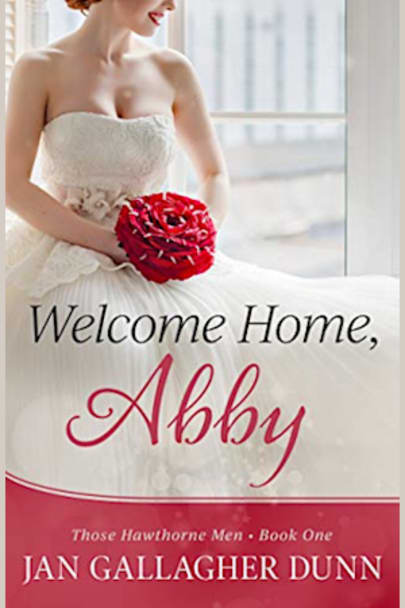 She won’t be used by a man again. He has a bad track record with romance.Abby fell in love with Jackson when she was 19, not realizing he was from the wealthy Hawthorne family. His father sent her away to protect the family money. She returns five years later, escaping a nasty fiancé – determined not to fall in love anytime soon. She needs protection and Jackson needs a mother for his daughter. … daughter. Abby agrees to a one-year deal, touched by the idea of a motherless child.

Jackson admits Abby is the only woman he’s ever loved, but he married the wrong woman after she left. His deceased wife’s family is trying to stake a claim to his daughter. He proposed a platonic marriage. He can handle the fact she’s more beautiful. Too late he discovers she smells just as sweet as he remembered. Abby is wonderful with his daughter. He’s a man who can run any business, why can’t he keep her arm’s length?

What happens when both of them want a more permanent relationship, but both are afraid to admit it?

Jackson and Abby were so in love years ago then disaster struck and Abby left town and Jackson was heartbroken. Abby’s ex fiance was physically and mentally abusive and Abby had to leave to save her life and sanity, so she goes back to the only place she could call home and that is Laughing Falls to put her life back together. Jackson got married on the rebound after Abby left but now his wife is dead and his in-law’s are trying to take his daughter away from him and that will never happen. When Jackson and Abby meet again there is still a strong connection and chemistry between them but they are both jaded from there past. Then Jackson asks Abby to marry him but in name only to protect his daughter and Abby so she says yes. Will this be a second chance at love for them or will there be more heartbreak for the both of them. This is the first book that I have read by Jan but I look forward to reading more of her books as I really enjoyed reading this book.
I Voluntarily Reviewed an ARC Copy Of This Book.

The reason for only 4 stars and not 5 is the editing wasn’t great. Sometimes you had to read a sentence several times to figure out what they were trying to tell you. Otherwise this could be a beautiful love story. Jackson came from the very wealthy Hawthorn family that pretty much ran the town. Abby came from the very poor McPherson family. Jackson and Abby were very much in love with each other but Jackson’s father was going to have none of it. He forced Abby into leaving town and staying away from his son. 5 years later Abby comes back home to get away from the evil ex-fiancee and praying he didn’t find her. Jackson has a deal for Abby, a one year marriage of convenience to keep Abby safe and be a nanny to his 3 1/2 year old daughter. Can a platonic marriage of convenience work for two people who were very much in love 5 years ago. A standalone with an HEA. A clean love story. Very refreshing…… no language and no sex!! Really different!!

This a great read that has well developed and engaging characters to get caught up with. The storyline flowed easily from beginning to the end.

Abby needs protection from his ex-boyfriend and from Jackson’s cousins.
Jackson needs a wife, so their parents-in-law don’t mess with his daughter, Erin.
The blurb sounded good but …Although I liked the book on the whole, there were things that bother me: the lack of communication between Abby and Jackson is all over the book, Jackson has a lot of cousins but only appears one of them, the dialogues are childish. However, I did like little Erin and her favourite word: ice-cream. She was so cute, I just felt like cuddling her.