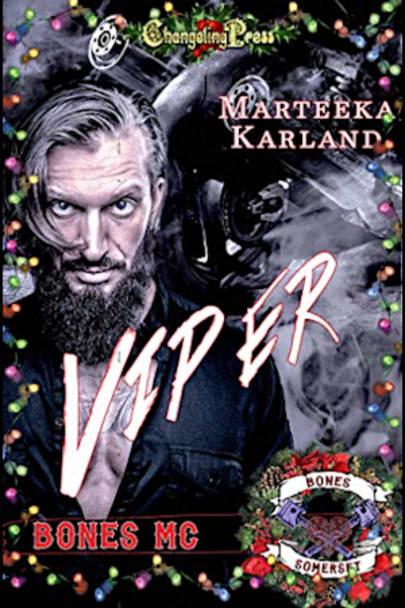 Who knew I’d find my destiny at Christmas? Not me. Or her daddy. Don’t mean I ain’t keeping her.Darcy: I didn’t run away from a sadistic stepfather and a mother who wouldn’t protect me just to be carted off by some strange man. I fought the son of a bitch. Woulda won, too, except the bastard had help.Viper’s rough around the edges and some kind of badass biker, so there’s no way this is going to … way this is going to work out well. Unfortunately, he calls to me on a purely sexual level. Makes my heart race and my body melt just looking at me. It doesn’t help he’s actually nice to me. He claims to know my dad. My real dad. Says he’s been sent to bring me back. I have no idea if I believed him or not. Just don’t really have a choice but to go along. At least for now.

Viper: I tracked the cunning little wench for three fuckin’ days. In the fuckin’ snow. She’s good, too. She survived on her own in a hostile environment with only a little trouble. That alone would make me respect for her, but then she had to go and kick me in the balls. Had I not been on the ground in agony, I’d have been turned on beyond belief. Now, with her safely under my protection, I’ve got to figure out how to keep my hands off her so her father won’t kill my sorry ass. He’s our intel man and one of my best friends, so I don’t want to cause him grief. But I want Darcy. Badly.

It’s Christmas Eve, and there’s an enemy on our doorstep with a unique gift. One that will leave us all with some hard choices — Darcy especially. What unfolds next is something none of us ever planned for.

Warning: Viper (Bones MC 4) deals with issues of abuse and human trafficking that may be triggers for some readers.

Oh my gosh this one tugged at my heart. Darcy and her stepsisters had such horrible hand dealt to them. Thankfully she escaped and ended up with a father she never met and a family who would protect her with all that they are. She also found Viper when he was sent to find her and I do believe Viper may have met his match with Darcy. This is a great fast paced, age gap read. Completely enjoyed it from start to finish.

Marteeka Karland’s writing is so robust and vivid that it carries you along with the story. Recommended!

Another great addition to the Bones MC. There are some surprises in this book along with all the normal instant love alpha biker personality the Bones men are known for.

Viper, one of the hunters for the Bones Motorcycle Club, was sent to the Kentucky woods in search of Data’s daughter, Darcy. Data had been gobsmacked when he learned that he had a daughter. The moment Viper sees Darcy, he is struck by her beauty and then her fierceness and her survival skills. Viper is a man of honor, with a spine of steel, a set of skills that he learned in special forces that he uses to protect his brothers and complete missions. He is a man that thinks of his brothers and family first and the rest of the world next.

Darcy knows that most men are not to be trusted as her mother had horrible taste in men. She is a character who can look after herself and had a hard wall around her heart to keep from getting hurt any worse than she had been. The heat between her and Viper was immediate and he was completely blown over by her beauty. It was rather fun watching him try and fight the attraction between them with no luck.

There is an almost palpable connection between Data and Darcy, she feels safe and knows almost immediately that he will do anything to protect and provide for her. It was such a sweet moment when Data showed her a picture of his sister that had passed long ago from cancer and Darcy could have been her twin.

The club loves, protects, and helps any woman they can. Although they are portrayed as hard and unforgiving to those who cross them there is the other side which one of the women calls them ‘teddy bears.

El Diablo who is a bit of an enigma as it seems like he was one of the top enforcers for the upper echelon of organized crime over the world. He has a daughter, Magenta, who is married to one of the club members, but she does not have a great relationship with him. The club had reached an uneasy truce the last time they met. It is a strange encounter as he brought a ton of food as a Christmas present. It really was a Christmas dinner between two families, the Motorcycle club that El Diablo ran had brought their woman and child to enjoy the feast. To my entire surprise El Diablo had taken the twin sisters, Serlda and Winter under his protection with a man to watch them until they figure out what was going to happen next.

This is a bit of a rushed book, but I did enjoy it, especially with the loving Christmas atmosphere balancing out the horror that Darcy and her sisters had gone through. I did think that the relationship between Viper and Darcy was rather quick and would have enjoyed seeing her giving him more of a chase, but it was fun anyway. So, if you are looking for a short Christmas story with big bad bikers acting like teddy bears towards their women and watching a brand-new member of the family be embraced, you will love this story. You’ll love it more if you also like a little heat with your hot chocolate.