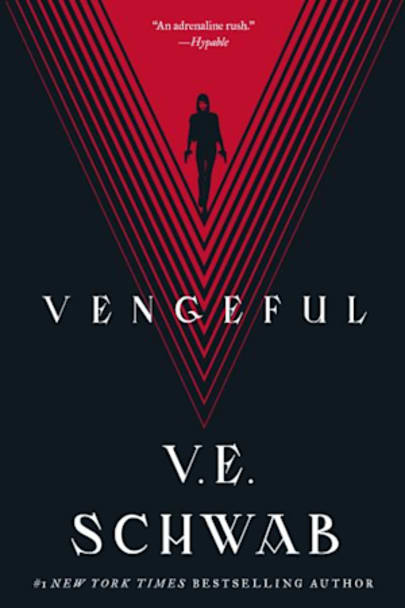 But Marcella Riggins needs no one. Flush from her brush with death, she’s finally gained the control she’s always sought–and will use her new-found power to bring the city of Merit to its knees. She’ll do whatever it takes, collecting her own sidekicks, and leveraging the two most infamous EOs, Victor Vale and Eli Ever, against each other.

With Marcella’s rise, new enmities create opportunity–and the stage of Merit City will once again be set for a final, terrible reckoning.

“Readers won’t be able to put down this dark and riveting tale of power and revenge.”–Kirkus Reviews, starred

“Schwab’s characters feel vital and real, never reduced to simple archetypes…In a genre that tends toward the flippant or pretentious, this is a rare superhero novel as epic and gripping as any classic comic. Schwab’s tale of betrayal, self-hatred, and survival will resonate with superhero fans as well as readers who have never heard of Charles Xavier or Victor von Doom.”—Publishers Weekly (starred review)

At the Publisher’s request, this title is being sold without Digital Rights Management Software (DRM) applied.

Vengeful sticks with you long after reading. It makes you feel known, seen. Powerful character arcs offered with slow-burn precision.

i have been so excited + scared to read this book. i loved vicious so much and wanted to have more of that, but was worried it wouldn’t be as good. unfortunately, that did happen, but not to so great an extent.

was vicious better than vengeful? imo, big yes.
was i disappointed in vengeful? tbh, not really. vicious wrapped up so well + felt like its own stand-alone story; i feel like vengeful is almost like a bonus story. like you don’t have to read it to complete the story from vicious, but if you enjoyed vicious, here’s some extra time with the characters we know and love.
would i recommend vengeful? if you loved vicious + want to see more of the characters, i would say go into this with lower expectations.

ultimately, what made me feel like this read was less compelling is how stretched it felt. there was just entirely too much going on at any given time with all of the new characters + there just seemed to be no clear focus. it really felt like the story was heavily centered around marcella, but then victor + the crew were kinda shoehorned in with no real purpose until the end.

for example, i really thought we were going somewhere with sydney exploring + trying to strengthen her powers, but not only did she decide not to resurrect her sister (good move), but she also didn’t get to use them to help victor. so why did that even need to be such a huge plot point? it came off to me like it was just a reason to keep her in the story.

i definitely came away feeling like if it had been written with entirely new characters, this might’ve been a stronger story. or even if our main characters were given better reasons to be involved.

I read Vicious, book 1 in this series, and loved it. Book 2 raises even more questions about the difference between a hero and a villain. Each character feels real and vivid and lost in different ways. She does things with structure that make me deeply jealous on a craft level. Like, in another author’s hands this non-linear timeline would be a jumbled mess, but here it’s clear and unrelenting, giving you information exactly when you need it in ways that ramp the tension up with quiet unforgiving dread.

Schwab always writes the most interesting characters. She deals with the gray areas of morality beautifully, and I enjoyed every minute of this. Her pacing can be uncomfortable at the beginning of each book, but by the middle you are completely sucked in.

VE Schwab never disappoints with an action-packed and entertaining read! I loved this book just as much I loved Vicious – I’m seriously hoping there will be a third book to the Villains series.

I would like whatever is in the water that VE Schwab drinks. She’s awesome and her writing and characters are impeccable. Loved this story even if I wasn’t supposed to “love it” and I adored these dark characters even through I don’t think I’m supposed to feel love for them. They are so shady.

VICTOR VALE! I love these books, so different and unique and powerfully engrossing. The plots and relationships so complexly laid out with a brilliantly, morbidly dark overcast to perfect writing. A sequel that is just as awesome as the original. I sure hope there’s more Villains forthcoming. V.E. Schwab has earned herself a new forever fan!

Kind of disappointing. I feel like it would have been better to just leave Vicious as a stand-alone. However, I LOVED Marcella.