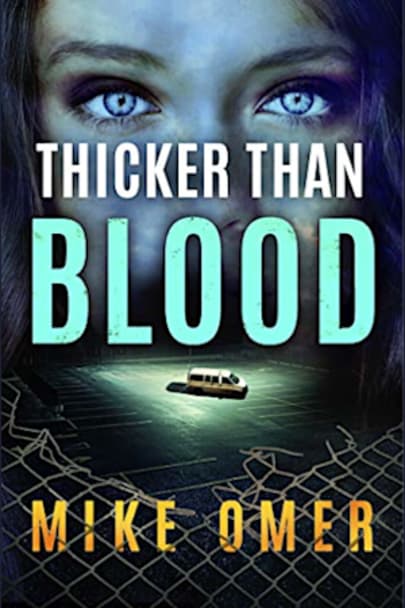 From Washington Post and Amazon Charts bestselling author Mike Omer comes the chilling conclusion to Zoe Bentley’s decades-long nightmare.
A murderer who drinks his victim’s blood? FBI profiler Zoe Bentley and Agent Tatum Gray thought they’d seen it all, but this young woman’s barbaric murder is especially hard to stomach.
They didn’t expect to work this case. But vampirism aside, the … vampirism aside, the murderer’s MO is identical to that of Rod Glover—the serial killer who’s been pursuing Zoe since childhood. Forensics reveals the murder to be his work, but not his alone; desperate to fulfill his sick purpose, he has taken on an equally depraved partner.

Zoe’s own frustration grows after another woman turns up dead and drained—and another goes missing. Time is running out: Zoe knows her own death will be the climax of Glover’s sinister play, which has been unfolding for twenty years. To stop Glover and his vile partner, she’ll need to plunge deep into their motives; but this means drawing ever closer to becoming another casualty of a dark, dark thirst.

I read all 3 books and they were all great. A limitless flirtation but not a lot of sex. ( I hate that) in a mystery Five Stats

I would recommend this entire series. Once I read the first one I obsessively read the other two. Keeps you reading well into the early morning hours which is the test of a good book for me

I LOVED IT AND I ALSO LOVE FINDING NEW AUTHORS THAT I LIKE.

One Persistent And Adaptable Serial Killer

Catherine is home alone. There is a knock at the door. She recognizes the caller and unlocks the door. The door slams into her; a hand clamps her face; she is hit and blacks out. When she wakes up, one person is sucking blood from a cut on her hand. Later Detective Holly O’Donnell arrives at the murder scene. She goes outside and sees two people trying to enter the crime scene. Those two want to speak with the officer in charge. They introduce themselves as SA Tatum Gray and Dr. Zoe Bentley from the FBI BAU. They were in Chicago and were notified by CPD of a strangulation murder. Since they were there because the serial killer Rod Glover was suspected to be in Chicago, they asked if they can observe the crime scene to see if Glover could be involved. Aspects of the crime scene fit his MO, but there are significant deviations.

The major main storyline thread proceeds from here. From the start the relationship of Holly with Tatum and Zoe was not good, but she does not have a partner so she grudgingly accepts their help because of the FBI’s speedier lab work and better resources. A second main storyline thread unfolds in the voice of “the man in control” so a parallel view of the perp’s side is available. There are plenty of twists, turns and misdirections. This combination quickly captured my interest and kept my mind actively engaged for the rest of the novel. This is my major requirement for a high star rating.

You, as a potential reader, need to be forewarned that there are rape, murder, abduction and torture scenes, not graphic or titillating but some described as they occurred. Some may find these aspects disturbing. Also, there are some scenes involving vampirism. The use of vulgar language actually is less than normal for police procedurals I have read. Overall, this novel definitely should be labeled as having Adult Content.

As mentioned above, I particularly liked the quality of the main and B-storyline threads that really captured my attention. I continued reading many times when I should have been doing something else. There were not any loose ends by the end of the novel. Obviously, my enjoyment was helped by having read the previous two novels, but I did not feel that there were any holes in the novel’s flow if you haven’t. If this storyline appeals to you, I believe that you can read this novel first in this series.

I have received a free e-book version of this novel through NetGalley from Thomas & Mercer with an expectation for an honest, unbiased review. I wish to thank Thomas & Mercer for the opportunity to read and review this novel early.

THIS REVIEW IS FOR BOTH THE AUDIOBOOK AND EBOOK VERSIONS
I loved it! Had the hardest time putting it down. So well written, the plot was amazing. I enjoyed all the characters and the narration was perfectly performed. There was some really great action and I was on the edge of my seat anxious to find out what was coming. I would love to see more with these main characters. I recommend this book.

Yet another incredible hit in the Zoe Bentley mysteries!

Book 3 wraps up a larger story arc from all 3 books, while also taking down another Serial Killer!

This was my first Mike Omer book and even though I ended up reading book 3 of the series, I have to say I’ve found another author that I like and am looking forward to reading more of his books.

As I mentioned earlier, this is the 3rd book (conclusion of the series) and while I didn’t read the first 2 books I was able to know get a good handle on the characters. I have to say I wasn’t a fan of Zoe at first, but she did actually grow on me. I was so hoping for a different ending for her and Tatum, but they do work well together…he is the calm to her storm!

There is a lot going on in this one!!!! Serial Killers, blood sucking, rape, mental issues, kidnapping, graphic and twisted with an ending I thought I had figured out, but BAM I was wrong!!!

If you like a twisted mind with lots of mind boggling twist and turns than you really want to read this book.

Forensic psychologist, Zoe Bentley, and FBI agent, Tatum Gray, return to Chicago to take down, not one, but two serial killers with a bizarre MO and a familiar connection to Zoe’s past. In this third installment to his Zoe Bentley Mystery series, author Mike Omer delivers yet another dark and twisted tale that will draw you in and keep you guessing right up until the very end. Undoubtedly, fans will discover that “Thicker Than Blood” is a thrilling addition to this riveting series.

Thicker than Blood is book 3 in the Zoey Bentley series. Zoey is a FBI profiler with a knack for getting into the killers head but a near death encounter (Book 2) with a serial killer has thrown Zoey off her game. Suffering from PTSD, Zoey is spending too much time in the victims head’s as she chases the demon from her childhood, next door neighbor/murderer Rod Glover. Glover has integrated himself into a Chicago community and picked up a sidekick. Zoey’s partner, Agent Tatum Gray fights to keep Zoe healthy and sane as the killings escalate and danger comes too close. Full of action and suspense, Zoey’s story captures the imagination and races the heart for a page flipper of a thriller that kept me reading way into the night. Awkward, intense, and brilliant, Zoey has quickly became one of my favorite lead characters in the thriller/suspense genre. My voluntary, unbiased review is based upon a review copy from Netgalley.

When growing up, Glover was Zoe’s neighbour and she figured out that he was the Maynard killer but when she told her parents and the police no one believed her not even when he came for her and got spooked by all the noise. Now she’s a profiler for the FBI and on the hunt for the serial killer in Chicago with her partner agent Tatum Gray. Her preoccupation with the Red Glover is bordering an obsession, analysing his past behaviour and trying to anticipate his actions. As the date for their return to Quantico nears, she becomes more frantic. She knows he’s here.
But Rod is no longer hunting alone; he’s got an apprentice, one with an appetite for drinking blood. He calls himself, the man in control but he’s very unstable and rapidly spiralling out of control. He believes that blood of a ‘pure’ donor will cure him, and save him from taking anti-psychotics.
I have a problem with rating this book. It has everything that a good book needs, a serial killer, and a dedicated profiler and FBI agent on his trail. You follow the investigation through Zoe and Tatum and other chapters are written in the pov of the crazed sidekick from the killer. I can’t find anything wrong with the story. It’s good but not great, or have I just read too many of this kind of stories lately? It might be because I didn’t read the previous books in this series where Zoe had earlier encounters with Rod Glover, but I never was completely absorbed by the story. The tension never rises to the level of more than a police procedural. Almost every hunch or idea the profiler and the police have turned out to true, it feels like an easy solution for not having secondary plotlines. There’s a mild underlying romantic/sexual tension between Zoe and Tatum that’s not recognised by either of them. Only Chicago police detective O’Donnell mentions it to her. The suspense is upped a bit when the killers don’t murder one of the victims but take her hostage as a living donor for the ‘vampire’. I won’t tell if this girl survives her ordeal or not. The eventual outcome appears to be clear but there are still some unexpected twists that even Zoe couldn’t predict.
I thank Netgalley and Thomas & Mercer for a copy of this book; This is my honest, unbiased review of it.