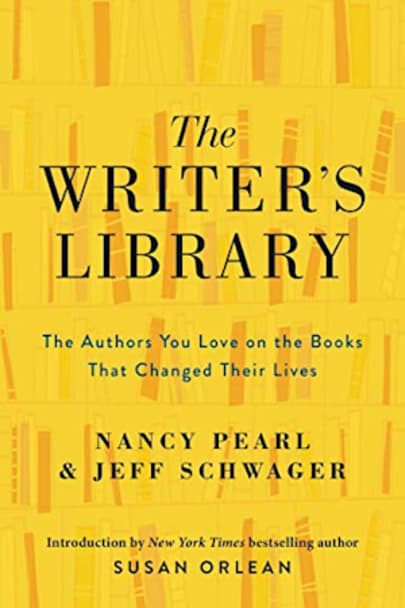 Before Jennifer Egan, Louise Erdrich, Luis Alberto Urrea, and Jonathan Lethem became revered authors, they were readers. In this ebullient book, America’s favorite librarian Nancy Pearl and noted-playwright Jeff Schwager interview a diverse range of America’s most notable and influential writers about the books that shaped them and inspired them to leave their own literary mark.

Illustrated with beautiful line drawings, The Writer’s Library is a revelatory exploration of the studies, libraries, and bookstores of today’s favorite authors—the creative artists whose imagination and sublime talent make America’s literary scene the wonderful, dynamic world it is. A love letter to books and a celebration of wordsmiths, The Writer’s Library is a treasure for anyone who has been moved by the written word.

The authors in The Writer’s Library are:

I Escaped from Auschwitz

Well all your adjectives apply to fiction really- this nook helped me add to my reading list from writers who are by extension readers. I got some solid recommendations

Book offered insight to famous writers and their reading choices. I’m enjoying it as a map across the literary landscape. Although I enjoy randomly picking up a book (fiction and nonfiction) to read, I also need a map to bridge gaps in my reading education.

Totally interesting…..like making new friends talking about books, but all you have to do is listen !!

While I found it interesting to hear writers talk about their reading life and favorite books, I had a few issues with this book: first, it often came across as pretentious, especially when the author being interviewed crapped on a particular book or author and the interviewers (Nancy Pearl and Jeff Schwager) just piled on. Second, I wasn’t familiar with some of the authors being interviewed, so it would’ve been nice to include more of an introduction to each one – a statement on why Nancy and Jeff chose that author for the book. That said, I really did enjoy hearing about the writers’ reading habits from childhood on, and I now have a whole list of books to add to my TBR list.

Nancy Pearl and Jeff Schwager’s book The Writer’s Library lets readers in on their favorite authors’ reading history, what they keep on their bookshelf, and how those books impacted their lives and their craft.

Pearl writes, “Our consciousness is a soaring shelf of thoughts and recollections, facts and fantasies, and of course, the scores of books we’ve read that have become an almost cellular part of who we are.” I found myself thinking about the books that were on my shelves across my lifetime.

I was happy to see books I have read mentioned but there were also many books new to me that I will add to my TBR list.

Certain books were mentioned by more than one writer.

Jonathan Lethem talked of “the poetic, dreamy, surreal stuff like Bradbury” and his favorite TV show The Twilight Zone. He said that Butcher’s Crossing by John Williams is better than Stoner, so I have to move it up higher on my TBR shelf.

Michael Chabon also lists Bradbury, and my childhood favorites Homer Price by Robert McCloskey and Johnny Tremain by Esther Forbes. He calls The World According to Garp by John Irving a bombshell; I do remember reading it when it came out. He is another fan of Watership Down. Also on his list are Saul Bellow’s Herzog.

One more Bradbury fan, Dave Eggers was in the Great Books program in school, just like me. He also loves Herzog. As does Richard Ford.

Amor Towles begins with Bradbury and adds poetry including Prufrock, Whitman and Dickinson, and a long list of classics.

Jennifer Egen loved Salinger’s Nine Stories. As a teen loved Rebecca by Daphne du Maurier and The Magus by John Fowles. “Then Richard Adams’ Watership Down took over me life,” and she got a rabbit. Oh, my! My husband and I also loved that book when it came out and WE got a pet rabbit–house trained to a liter box. I share a love for many of her mentions including Anthony Trollope.

Madeline Miller also notes Watership Down as one of the “great favorites of my entire life.” She is a fan of King Lear, The Love Song of J. Alfred Prufrock by T.S. Eliot, and Charlotte Bronte’s Jane Eyre.

Laila Lalami mentioned Waiting for the Barbarians by J. M. Coetzee as a favorite.

I would not have guessed that Luis Alberto Urrea had fallen hard for Becky Thatcher (from The Adventures of Tom Sawyer) or that he fell in love with Stephen Crane’s poetry.

At college I read The Sot Weed Factor by John Barth; it is one of T.C. Boyle’s favorite historical novels. He calls Remains of the Day by Kazuo Ishiguro “one of the greatest books ever.” And he brings up John Gardner, whose novels I read as they came out.

Charles Johnson also studied under John Gardner whose book On Moral Fiction appears on his shelf along with Ivan Doig.

Jane Hirshfield was “undone” by Charlotte’s Web by E. B. White and loved Water de la Mare’s poem “The Listeners” and reads poetry including Emily Dickinson, Walt Whitman, W. H. Auden, and Gerard Manley Hopkins. Philip Levine is a poet on my TBR shelf that she mentions.

Vendela Vida is “indebted to Forster,” including A Passage to India. Also on her shelf is Coetzee’s Disgrace.

Laurie Frankl’s books are not ones I have read. Along with all the other books on these author’s shelves, I can extend my reading list past my natural lifespan!

Readers will enjoy these interviews, comparing book shelves, and learning the books that influenced these writers.

I received a free ebook from the publisher through NetGalley in exchange for a fair and unbiased review.