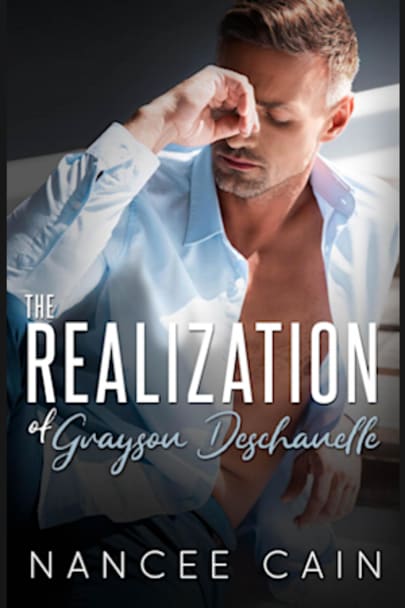 Sex, no strings attached. Despite a high-profile clientele, fashion photographer Grayson Deschanelle prefers being behind the lens, away from public scrutiny. After his movie star girlfriend dumps him, he flees to his stepbrother’s remote cabin to hide from the paparazzi. Related to Grayson by marriage, Lissy Carlton decides his plan to run from his problems might work for her, too. And perhaps … problems might work for her, too. And perhaps he can help her out of the predicament that tanked her grades this semester of college as well.

Caught by surprise, Grayson finds Lissy much different than the girl he’s known for years. She’s no longer a child—though her teenaged crush is still very much intact. Snowed in with her, he tries to fight his growing attraction. But being with Lissy brings what his life is lacking into sharp focus.

The ice melts, and they return home. When their families discover their secret, Grayson must decide what kind of life he truly wants—and whether he’ll fight to keep Lissy by his side.

Over the past couple of years, I’ve read many books in Nancee Cain’s “Pine Bluff” series, which consists of 7 stand alone novels. Not always having free time to read, I’ve read them out of order and still have a couple of books to catch up with. But I’ve always known I would go on to read the remaining installments because I’ve enjoyed spending time with the residents of the small Alabama town that serves as the setting. Nancee has taken great care creating a multitude of complex and interesting characters that I connect with.

“The Realization of Grayson Deschanelle” is the final story to be set in Pine Bluff, and the reader is treated to a hero who is decidedly not from this neck of the woods. Grayson Deschanelle is a world famous French fashion photographer with family ties by marriage in Alabama. One of his step-relatives is Lissy Carlton, who was just a teenager when the two were introduced. Naturally, she develops a crush on the sophisticated European man, who is also well into his thirties.

Fast forward five years, and Lissy is now a twenty year old while Grayson is about to turn forty. Both have been going through a difficult time and both decide to seek refuge far away from everyone else. When they simultaneously arrive at a family cabin to lick their individual wounds, the two find unexpected solace in each other’s company.

Lissy’s long-standing crush on Grayson is alive and well, and now he discovers his own growing attraction to the spirited young woman. Despite their age difference and life experience, there is a special chemistry between Grayson and Lissy. Grayson is respectful of Lissy and provides her the freedom to be herself. He enjoys spending time with her and he cares about her well-being.

Lissy brings Grayson joy and excitement, but he’s also concerned. Believing he’s too old to be a suitable match for Lissy, Grayson worries how she’ll be treated by others should their affair be publicly revealed. Lissy isn’t so concerned about his age. Instead, she’s worried about losing the happiness he brings her once they both return to their separate lives.

At the cabin, Grayson and Lissy succumb to temptation, committing to nothing more than a fling. Reading what happens once their rendezvous is over proves to be a real page turner and a fitting finale. Five stars for a complete and heartfelt series, full of inspiring, memorable characters.

When you run from your problems you never know where or who you’ll end up with But for Lizzy and Grayson, luckily found each other, even though that wasn’t the plan. A wonderful couple , as age is only a number and the important thing is the people in the relationship. I always say how great a writer Nancee Cain is and this is another reason to say it again. No matter what happens in life, love can find a way and gives us all hope for ourselves. 10 Stars from me

Grayson and Lizzy are amazing. This story is sweet, surprising, and full of hope. The character interaction is unique and beautiful. This story is very relatable as well in that everyone has had a crush on someone and wondered what it would be like if that person ever felt the same way. I completely love and recommend this book as well as the series to everyone.

A great sexy story full of love and fiery courage. I really enjoyed the characters and reading their journey together! It was a fun and entertaining story; a great addition to the series!

Grayson and Alyssandra’s story starts as the crush of a teenager. They have many ups and downs in a short time period. Personally I feel Josh got off light for his prank. I almost had to be very unhappy with Patsy, too. But that was put to rights. This is an amazing series and I highly recommend it.

It never fails, when I start reading a Nancee Cain book I just can’t put it down until I read through to the last page!
I’m really sad to see that this story is the final chapter on the Pine Bluff Series, but at the same time, many of these books were such amazing reads.

In the final story, The Realization of Grayson Deschanelle, Grayson is a worldly high-profile fashion photographer. Of all the books in this series, he is the only one who really doesn’t have any ties to the small Alabama city from his past. Grayson may be an in demand photographer, but he doesn’t like to live his life in the limelight. However, that option is taken from him when his girlfriend dumps him and starts to smear his good name through the dirt with the paparazzi all to get herself more press time. To escape the never ending questions and paparazzi constantly chasing him, Grayson flees to his stepbrother’s cabin to hide out, get refreshed, and if he’s lucky some unchained horizontal time with some lucky ladies.

Lissy Carlton, related to Grayson only through marriage, developed a crush on the fashion photographer at the age of 15. Even though she is a teenager, Grayson has never talked down to her like she’s a child, like everyone else in her family seems to. But now Lissy is a 20 year college student who now fears she’s just another college statistic. When she learns of Grayson’s plan to run and hide, she feels the same might work for her with her problem…

For Lissy there was always feelings for Grayson, however, for Grayson he knew she was too young, but now it’s been 5 years since her last seduction attempt. When Lissy puts her mind to something she doesn’t back down, especially when it comes to love. But things won’t be easy for Grayson and Lissy. Lissy must first convince Grayson to give them a chance and overlook the age gap and problems that might arise if their families find out they are together. But she also has to break through with Grayson to convince him she doesn’t crave a marriage like all other females, she’s happy to just have him in her life as her lover.

I really enjoyed Grayson and Lissy great couple trying to find a way to be together and stay together despite a large age difference. There are a lot of twists in it and I love the characters and the snarkiness of them.

I loved this forbidden, age-gap romance! Grayson and Lissy stole my heart and they had so much love for each other. There were so many great scenes of them and I loved the storyline.

Grayson Deschanelle, famous for being behind the camera,
Lissy Carlton , famous, in her family anyway, they all think that she is a scatterbrain and doesn’t know what she wants from life.
~~Grayson is now hiding out from the paparazzi , thanks to his ‘movie star’ ex.
~~~~~Lissy has a predicament, the reason she flunked out this last college semester . She hopes Grayson can help her out.
She’s know him since she was 15 and he’s treated her like she has a brain, he listens.
Snowed in with her, at his brother’s remote cabin, he tries to fight his growing attraction.
Join these two as they navigate feelings and families.
This story is a powerful testament to love between two people.
Grayson is a keeper
5 stars
I recommend this book and the entire Pine Bluff Series

What can I say about this book? I loved it! With each of Nancee Cain’s books, I find a new book boyfriend. Grayson Deschanelle does not disappoint. He’s a man who has lived his own life, a love ‘em and leave ‘em type. A talented fashion photographer with a choice of any and all women he wanted. He’s mature, sexy, with a delicious accent.
Alyssandra Carlton is young, smart, and a free spirit. They’ve known each other for years and she’s loved him from the beginning. A snowstorm, some secret planning, and a hidden passion fuel this great book. Can a mature man, set in his ways, have his world turned upside down by a young woman who is determined to make him hers?
Nancee Cain has given us another great love story. Her characters fight their feelings, fight for each other, and fight for their futures. Visit Pine Bluff and fall in love with Grayson and Alyssandra.

Reading The Realization of Grayson Deschanelle was kinda bittersweet, the final book in the Pine Bluff Series.
The forbidden romance, the age gap, everything about TRoGD was absolutely captivating.
Some intense scenes, you won’t be able to turn the pages quick enough.
I think TRoGD is my favorite in the series.
Sweet, swoony, quirky and funny. Everything you’ve come to know and love in a Pine Bluff novel.