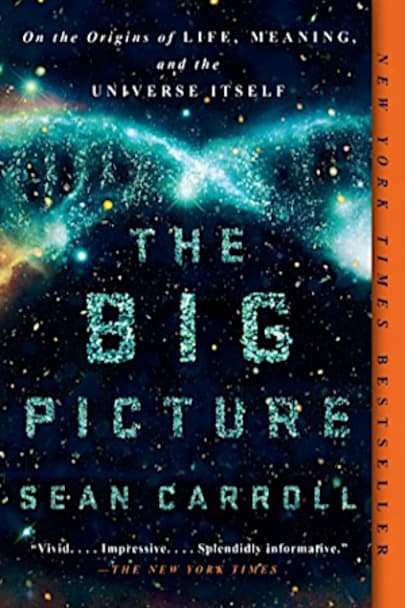 In short chapters filled with intriguing historical anecdotes, personal asides, and rigorous exposition, readers learn the difference between how the world works at the quantum level, the cosmic level, and the human level—and then how each connects to the other. Carroll’s presentation of the principles that have guided the scientific revolution from Darwin and Einstein to the origins of life, consciousness, and the universe is dazzlingly unique.

Carroll shows how an avalanche of discoveries in the past few hundred years has changed our world and what really matters to us. Our lives are dwarfed like never before by the immensity of space and time, but they are redeemed by our capacity to comprehend it and give it meaning.

The Big Picture is an unprecedented scientific worldview, a tour de force that will sit on shelves alongside the works of Stephen Hawking, Carl Sagan, Daniel Dennett, and E. O. Wilson for years to come.

Today we are heading into the land of theoretical physics, by way of the philosophy of, well, everything… My review copy was provided by the publisher. The book is subtitled “On the Origins of Life, Meaning, and the Universe Itself” and believe me when I say Carroll covers all of them adeptly and without dumbing anything down. He is a much-lauded theoretical physicist, and it is not difficult to see why he’s received the accolades he has. His theories are well presented and clearly laid out. That’s not to say they are simplistic – they definitely are not. They are adroitly presented, with historical support and background, and are written in language that can be challenging to unpack but the unwrapping is part of what made the book so enjoyable for me. Too many “popular” science books are written in an overly simplistic fashion. I realize that a lot of theoretical science is exceedingly complicated; removing that complication isn’t necessary for laypeople, deciphering it is. And Carroll is a master at translating high-concept physics into accessible packets of information. You may need to reread some of the descriptions to truly grasp their layered complexity – I certainly did. But the chapters and ideas are presented in manageable, European- rather than American-sized, portions so rereading did not require as much effort as it may sound like it would.

For the rest of my review, please visit http://blog.jill-elizabeth.com/2016/08/01/big-picture-by-sean-carroll/

Sean Carroll is a theoretical physicist at Cal Tech, so no…this isn’t crime fiction…unless you consider the Big Bang a felony with gunfire. Don’t let the science put you off. I deep-dived into the book, and I’m the guy who read “Einstein for Dummies” twice and still only grasped half of it. But I have a deep interest in the expanding universe, exoplanets, the search for extraterrestrial life, etc., so I read lot in the area. I also listen to Carroll’s “Mindscape” podcasts, which I also recommend.

Carroll’s great talent is presenting complex concepts for the reader who wouldn’t know quantum mechanics from a four-barreled carburetor. The book is not solely science. Sure, Carroll explains the physical nature of the universe, but his book is also a meditation on our place in that universe. So, there’s astronomy, cosmology, and physics, to be sure. But also philosophy.

If you’ve done any reading in this arena (Neil deGrasse Tyson, perhaps), you know that we’re literally made of stardust. But that’s not all we are. The reader may feel he or she is the tiniest speck of matter on an insignificant rock in a universe of unimaginable size. (Unless you can imagine a distance of 93 billion light years, one light year being 6 trillion miles). But Carroll is a scientist who can opine on the meaning of human existence and what to do during the three billion heartbeats of an average lifespan. He also provides a drawing of the Tiktaalik Roseae, the fish that crawled from the ocean onto the land 400 million years ago…and the rest, as they say, is history. Or perhaps anthropology.

This is a book that lives up to both its title, “The Big Picture,” and its subittle, “On the origins of life, meaning, and the universe itself.” Highly recommended.

Sean Carroll writes an illuminating work on our place in the universe and how we view ourselves The author contradicts Albert Camus who views the universe as unintelligible He writes It is a place gloriously knowable and that is its most remarkable feature Several chapters address consciousness which the author sees as less of a unified conception and more of a collection of related attributes and phenomena in which we can contemplate alternative futures.The writer conveys both the magic and wonder of one of our most splendid creations – the mind

Great summation of our current understanding of reality. Absolutely gave context and structure to the many thoughts and random understandings I’d picked up over a lifetime of unsystematized readings. However–he is way too cocky or confident that what he knows is how it is. I was constantly reminded of the physicists of the late 19th century who were certain they knew all there was to know about physics–and then came Einstein & Bohr who both blew them all away. Dr. Carroll! Neither you nor any other physicist knows the why of Quantum Mechanics. My guess–history is my guide–that when we do, it will upset everything: The Big Picture will look quaint and naive and be forgotten by all but the historians of science who find malcious glee in the study of hubris.

For future readers–a big help to me was watching the Space Time videos produced by PBS Digital Studios and The Great Courses Plus. Superbly done they made clear many of the oddities of quantum mechanics that Carroll talks about.

Sums up what humankind has figured out so far about how the world actually works and the limits of our understanding. He very effectively makes the case for the methods of science, that have got us so far, as being the only sane way forward.