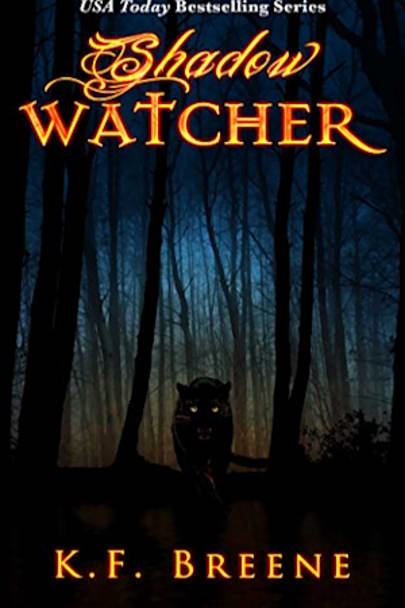 The Sixth Book in the USA Today Bestselling Darkness Series

Try the first book, Into the Darkness, for free.

In the wake of ridding their territory of a menace, Sasha has only one pressing duty left: find more human magic workers. And while it is undoubtedly important on some grand scale, the task is, in itself, surprisingly uneventful. That is, until a strange predator takes an interest in … strange predator takes an interest in her and Charles on their trek home one evening. In the space of twenty-four hours Sasha’s life goes from mundane to being stalked and threatened. A new shifter has moved into town, and if the whispered rumors are to be believed, something even more sinister is lurking behind, watching and waiting for the right moment to spring.

But that isn’t the only element that turns Sasha’s life upside down. She has one hell of a secret that will change her and Stefan’s life forever.

A Walk in the Woods

4
‘Shadow Watcher’ is book six in K.F Breene’s Darkness series. This story continues on from ‘The Council’. Highly Recommend previous books are read prior to this.

After getting rid of Andris, Trek and the demons life for Sasha and Stefan has been quite. With the promise to find more humans like herself, Sasha and Charles are out people watcher. But they ain’t the only ones out watching and spying. A quiet life is not in the books for Sasha, Stefan and the inner circle, life is about to get a whole double crazier. With a new shifter in the territory The Clan must once again work together with The Pack to find out who is sniffing around.

I’ve been loving this series the constant growth and development between all the characters has been wonderful to read. And it continues on in this book, with so many extra surprises and shocks. New characters show up and becomes a new key person that is interesting and fits into the inner circle with grace.

This book is full of many questions and a new unknown enemy. Watching the Clan all come together along with the Pack, Dom and Toa is always such a scene but when it’s to protect and support one of their own, watch out to anyone that tries to interfere with that.

But that ending needs to be cleared up now…. I can’t wait any longer I need to head over to ‘Jonas’ now.

I seriously love this series.
Sasha and Stefan have been through so much, finding themselves, finding each other figuring everything out together becoming mated and now the ultimate gift for Stefan’s people procreation which is such a rare magical blessing. I have to say I love how cherished pregnant woman are in Stefan’s world by everyone.
Even during this blessed time, there is still strife around every corner weird happenings with new shifters bring forth new problems to solve.

and I have to say Sasha pregnant was hilariously beautiful.

I didn’t think ‘The Council Book 5’ could be beaten for moving our favourite characters forward, in terms of their story & growth, but I was so wrong. ‘Shadow Watcher’ has taken the entire Mansion down a new & exciting path. It will change things but by how much? We’ll have to wait & see!!

There are a couple of new characters in this instalment that join Sasha’s inner circle.Paulie & Anne is cemented in finally Paulie is street smart, an ex con, built nearly as big as the Boss’s race & he’s ferocious too!! I’ll let you make your own minds up about him.

Sasha seems to be being stalked like prey throughout Shadow Watcher, is it a Mata? Tim & his pack aren’t responsible so who is & is there a bigger danger hiding behind this threat?

Shadow Watcher is filled with tension, laugh out loud moments, tenderness that brought tears to my eyes & steamy scenes that we’ve all come to expect from K. F. Breene.

This is an amazing installment of the Darkness Series. It had me turning pages so swiftly I was left stunned when I’d finished the book, I just wanted more, I adore this world we’ve had brought to life for us. The cliffhanger ending is nail bitingly good but I loathe cliffhangers & wished the book was longer

I recommend this book & the whole Darkness Series to everyone 16+ that likes paranormal romance that’s sassy, funny & thoroughly engaging.