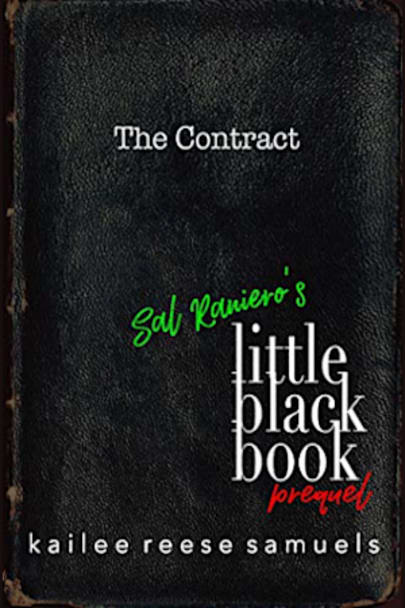 “Sign here, Salvatore.”Three words.Three words changed his world. With the contract on the table, Sal considered his options. Winding up by accident in the Middle-of-Nowhere, Texas, he ventured into another world. With scrutiny, he listened to their lies and deceit, but it wasn’t long before he realized a devious monster aimed to take control. The grooming they offered in the words of the … offered in the words of the contract might be worse than enduring his familial blood ties…

If he returned home, then his father’s ideal outcome for his only son would force the young man into being trained for the family business. Refusing his father’s violence, Sal wanted no part of the mafia, but he was out of options––stay moving or give up fighting against his legacy. The insidious contract held the lure of stability and protection he craved.

He had to make a decision.
Sign or walk away.

But Sal wasn’t as fresh to the game as they thought. He was raised in mayhem and manipulation. With a fierce determination and mischievous charm, he acknowledged the precise calculation of every minute and vowed to outplay the players.

And you’re secretly invited to join his game as he eliminates or harbors the pieces one by one.

With a candid look into the past, Sal removes the shadows concealing the hidden secrets and clandestine meetings of his beloved Little Black Book. Flipping through the memories, he recounts the lucrative indiscretions that made him the man he is today. As the keeper of his clients’ dirty laundry, he vigilantly held the promises contained in the contract, until now…

Over the course of 24 books, Sal Raniero’s Little Black Book has been mentioned many times. For the first time ever, he opens the heart of his past and reveals the women who adored him.

In this prequel to the first client, The Contract offers a means to an end, and at the time, Sal’s very survival.

Dark Romantic Suspense
Each client’s entry/book can be read as a standalone.
Approx. 100-120 pages

With such a rich tapestry of characters and events, Kailee Samuels has produced an epic and complex story, which just continues to grow with every mesmerising addition. It starts and ends with the bright star that is Salvatore Raniero, who moves throughout each book with his justifiable swagger, panache, sexy aura which combines with a sharp mind, a compassionate soul, a lover of women and men and the courage to take life firmly by the throat and shake it to unearth the nuggets of gold it hides. I think I know Sal, but sometimes I feel that he is like the Cheshire cat, and all I really end up seeing is that smile as he spirits himself away in order to get up to mischief.
This prequel is a firmly satisfying taster of things to come, and insight into future events. Wonderful

“We’re all three-seconds from being a sociopath. Discipline, or lack thereof, defines the character.”

It always feels so good to go back to Mrs Samuels’ Juliet world! If you are a Sal addict, you’ll love to get more of him. You’ll grin at the new perspectives the author added to her intricately woven universe. On the other hand, if you don’t know who Sal is (*gasps in shock*), you’ll get a first taste of his charming ways and of the secrets that surround him.

Once again, in Sal Raniero’s Little Black Book Prequel: The Contract, I adored KRS’ brilliant and unique storytelling. I never fails to thrill me!

Sal addresses the reader directly, confiding in us, giving a sense of being in the know. With maturity, and a somehow darker tone, he takes us back in time.

“I was a savage, albeit a bit sloppy in retrospect , but my audition showed potential.”

Through sexy scenes and intriguing situations, a new light is shed on some characters, reinforcing or… shattering my beliefs.

In turn, I laughed, I fanned myself and eventually ended up almost screaming at my Kindle. Smiling as new (renewed?) questions strated swirling in my mind.

Short, sensual, deliciously clever, this prequel left me longing for more. I am excitedly waiting for the first installment in January! The game is on…

I VOLUNTARILY REVIEWED AN ARC COPY OF THIS BOOK. THANK YOU!!!

This book takes you back to when Sal was just 18 and how he got to meet the people that become such big parts of Kailee’s books! Cannot wait to read more!! Love it!

This is a great book. A quick read but will grip you right from the first page. I love finding out about Sal’s little black book. You get more of a glimpse into how Sal started. I can’t wait for more from Kailee. I have not been disappointed in any of her work. I highly recommend any of her books.

Ok so I have read some of Kailee’s books where Sal makes an appearance and he had me so intrigued. This book is how Sal came about being the person he is today(which I really don’t know him yet) and goodness he is such a sweet sexy person. I am sure anyone who reads this book already knows a lot about Sal and are maybe getting their questions answered. I would definitely read this book and any others by Kailee. She is an amazing writer!!!

I often feel like I’m repeating myself A LOT when I review Kailee’s books. Why? Because she always delivers such phenomenal pieces of fiction, that’s why. I’ve never, ever been disappointed in any book she’s written.

Little Black Book takes us back almost to Sal’s beginning. He’s 18 and headed towards his destiny as a dominant. Good lord, this man…my forever and always sigh-worthy hero. He quite literally makes my toes curl. And now, I get to learn of a deeper connection with Nico (yet another favorite of mine), among many other revelations.

Kailee Reese Samuels writes excellent fiction. She creates full and colorful worlds with her words. She takes me to places I wouldn’t normally be able to go to. Her characters are so unique, so real, and I get so caught up in the story that I forget I’m reading. When I think back on the book I’ve just read, I see it, it feels like I watched a movie, and a very good one at that.

Kailee holds my heart in her hands as I read her books. She can make me laugh, cry, get angry, and even sigh in wanton desire. Yes, she’s that good. But I’m repeating myself AGAIN, aren’t I?

This is another excellent story by one of my absolutely favorite authors. Highly recommended.

KRS has done it again! Another phenomenal read that grips you from the very first page.

If you love Sal this is an absolute MUST READ. We go back in time to when he was just an eighteen year old punk kid who wanted away from the life he was born to and grew up surrounded by. We get the secrets, names, details and reasoning behind the decisions made and the steps took that led him to be the Sal we all know and love today. I loved this informative and entertaining glimpse into Sal’s beginning.

Highly recommended to all Sal lovers!

The perfect insight to Sal and the people and experiences that molded him into the alluring, but dark and dangerous man he is today! I’m always left breathless and in need of a very cold shower whenever I read about Sal Raniero and his exploits and this little tease into his past was no exception! A fabulous look back, if you love all things Sal then this is definitely the book for you!

WOW I really loved this going back to Sal’s younger self of 18 to see where it all begins and it is intense hearing his version of events and the people he meets. I can’t wait for more.

This novella starts what is going to be the unveiling of Sal’s book, his long-held secrets. A lot of the material was alluded to in other books, so if you’re a huge Samuels’ fan, then you knew a lot of this was coming. But we get to see the unfolding of Sal, the sculpting that had to take place to make him into the man we know now. It was nice to see exactly how Nico fit into his world, a dark man we’ve come to adore. This was a fun teaser of all the good things to come, it’s just the beginning of a complex web of secrets, vaulted in Sal’s mind, until now

New to Sal? This is a wonderful glimpse into how he began his transformation, a delicious teaser that will leave you wanting more.

Not new to Sal? This is an absolutely amazing perspective of young Sal and the amazing people who helped shape and guide him. Believe me when I say you will be surprised to learn new things about him.

Kailee’s brilliance continues to shine and we are the lucky ones who get to bask in it!