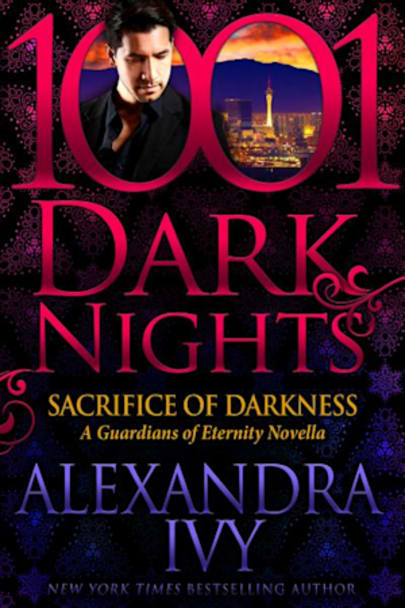 From New York Times and USA Today bestselling author Alexandra Ivy comes a new story in her Guardians of Eternity series?Javad has one rule. No fighting pits.It doesn’t matter that the savage battles have been a tradition among demons for eons. As the manager of the Viper’s Nest in Vegas, his word is law. Period. Then he hears rumors that some fool has dared to create a fighting pit in the middle … middle of the desert. He goes in search of the hidden location, only to realize too late it’s a trap by his former master Vynom. The powerful vampire is determined to force Javad to fight once again. This time to the death.Terra is a rare fey creature known as a Seraf. Long ago she’d been captured by Vynom and forced to heal the fighters he used in his pits. Javad had rescued her, and she’d given him a medallion. If he ever needed her, all he had to do was to speak her name and the magic would lead her to him. When she hears his call she doesn’t hesitate to rush to his rescue. Even when it means returning to the dark violence that still haunts her dreams. Can they escape the nightmare that nearly destroyed them in the past? And if they survive, are they willing to sacrifice the duties that have pulled them apart to battle for a future together?Every 1001 Dark Nights novella is a standalone story. For new readers, it’s an introduction to an author’s world. And for fans, it’s a bonus book in the author’s series. We hope you’ll enjoy each one as much as we do.

3.75 stars—SACRIFICE OF DARKNESS is the 15.1 instalment in Alexandra Ivy’s contemporary, adult GUARDIANS OF ETERNITY paranormal, romance series, and the latest addition to the multi-authored 1001 Dark Nights series. This is vampire Javad, and Seraf Terra’s story line. SACRIFICE OF DARKNESS can be read as a stand alone without any difficulty. Any important information from the previous story lines is revealed where necessary.

Told from several third person perspectives including Javad and Seraf, SACRIFICE OF DARKNESS follows the imprisonment, escape and recapture of vampire Javad, by his maker Vynom. For centuries, Javad had been forced to fight in the underground cages where he would meet Terra, a Seraf, a fey creature with the ability to heal. Upon his escape Javad would become the manager of the Viper’s Nest in Las Vegas but the possible reappearance Vynom running another underground fighting ring in Javad’s territory forces our hero, along with Levet as his guiee, to search for the man responsible. Imprisoned and forced to fight to the death, Javad would, once again, come face to face with his fated mate, Terra, when Vynom gets help In the recapture of both. What ensues is the fight to the death between Javad and Frack the Orc, and Terra and Javad’s struggle to free themselves from the underground cavern.

SACRIFICE OF DARKNESS is a quick read In which we revisit with our resident Gargoyle Levet; are introduced to the frost fairies; and see another vampire fall under the spell of his fated mate. The premise is fast paced and entertaining; the characters are colorful and dynamic; the romance is passionate.

Sacrifice of Darkness by Alexandra Ivy is book 15.1 in the Guardians of Eternity Series. This is the story of Javad and Terra. Javad is tricked into returning to his enemy where he is in danger. Javad calls in a promise to help him as he did Terra. So Terra comes to help him but is returning to where she escaped from. Exciting quick read. I plan on read more from this author.

Javad has come along way since his blind devotion to Vynom days. He fought his way out of the fighting pits and now as master of his own territory, his one rule is no more fighting pits.

But it looks like someone didn’t get the memo. So with the assistance of our resident KISO, Levet, he goes searching for the pits to shut them down. But it’s a trap and VYnom is awaiting him, ready with a way to both make money and gain his revenge!

Terra escaped the fighting pits with the assistance of Javad. She had been forced to continually heal the fighters, ensuring they could fight on, and, and on. But now the token she gave Javad had been activated and she must once again go against the Matron and assist Javad.

Brilliant little story. Javad screams Alpha but is also a caring individual. Let’s face it any story Levet crops up in he just about steals the show! I lOVE him! Talk about comic relief.