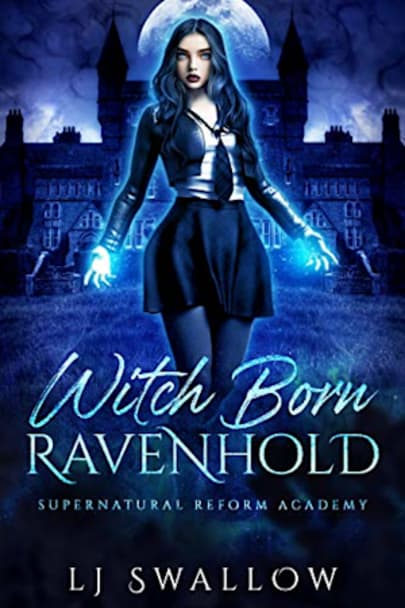 Last week I accidentally and publicly raised the dead. Now I’m the only necromancer at Ravenhold reform academy.
Ravenhold detains dangerous juvenile offenders on a remote Scottish island, where their magic is useless and escape impossible. I’m told I’ll leave after rehabilitation, but nobody will tell me how or when.
Dorian Blackwood rules over the vampires, shifters and witches in the … shifters and witches in the academy’s halls. As the only vampire-witch hybrid in existence, he has unparalleled supernatural abilities and few people dare confront the cruel and charming savage.

But the academy’s two other powerful hybrids want him deposed—Zeke the dominant shifter whose laidback manner hides a vicious streak, and the silent and secretive Ethan who nobody dares touch. As the new hybrid at the academy, I’m dragged straight into the middle of their power struggle.

Even though I’m drawn to the three guys, I want to keep away from academy violence and politics. I make a plan to keep my head down, attend the classes, and hope for an early release. I don’t want anybody to discover my secret: I’m the trinity witch.

But something sinister runs through the academy underbelly as students go insane or disappear without a trace. When I’m made a sickening offer, I discover exactly how sinister.

To survive Ravenhold’s corruption, I’ll need to make a deal with three hybrids who can choose to either help me or kill me.

Witch Born is the first book in the Ravenhold series from USA Today bestselling author LJ Swallow. The books are set in a supernatural reform academy with deliciously dangerous guys and a badass heroine who won’t bow to anyone. Ravenhold is a slow burn, enemies to lovers, dark academy reverse harem romance series and contains steamier scenes than the Nightworld Academy books .

PLEASE NOTE: This book is written in British English and includes spelling and grammar styles that may look incorrect to some readers

Witch Born GAH!… Ya’ll this book was EVERYTHING! From beginning to end I was completely blown away & consumed by all things Ravenhold.

Eloise, Ethan, Zeke & Dorian… so many secrets, lies, twists & turns, unexplained connections, rivalries, grudges and magic… I couldn’t put this book down! All the tiny details and layers to this new book world… Ya’ll I’M OBSESSED! && I honestly feel like we’ve barely scratched the surface of this/their story… and I cannot wait for more!

I have been awaiting this book for so long and was so excited to read it as RavenHold is mentioned a lot in LJ Swallow’s Academy series. Well i hear you ask “was it worth the wait?” the answer is a resounding ABSO FREAKING LUTLY!!!
I love the Academy series but it is young Adult and most of the time i want so much more from this author and i believe this series will full fill this as it is more adult with some amazing lead characters who are so diverse in personalities and supernatural type but also have such a strong presence each commanding your attention independently and as a collective.
Our female M/C Eloise outwardly appears strong but inside is quite vulnerable and afraid. I love her inner strength and resilience plus the willingness to stay true to who she is.
Our initial 3 men are Dorian, Zeke and Ethan all Hybrids the same as Eloise but also all Alpha’s – all content or biding their time in Raven Hold before Eloise was incarcerated and now she is the catalyst put in the melting post where potentially they could rip each other apart but if they can band together they turn from being individually strong to being together and unbreakable as a force to be reckoned with. so which way will it go?
Lots more heat and sizzle which we know form the horseman books that LJ Swallow is good at plus so many twists and turns along with some rally unexpected plot directions will draw you in and entertain you completely so sop on board this roller coaster and enjoy the Ride.
A truly un-put-downable book and my new not so secret addiction.

I have been waiting on this one for a while and it did not disappoint! I love Eloise and how she puts Dorian in his place at every turn. Dorian Blackwood is not used to being told no or not getting his way, but she stands up to him and keeps him on his toes. She handles all of her guys the same way and I love to see that. I absolutely cannot stand Marcus. He needs to go somewhere and not come back. This book is steamier that Nightworld Academy and I love that aspect of it. There is more to what is going on at Ravenhold than meets the eye and I am beyond curious to see what happens next.

Hold onto your hats everyone, for this is a doozy of a ride!!! My goodness! Oh so many twists and turns, and secrets galore. Eloise is the Trinity Witch, raised by a cruel family and forced into a cruel engagement. A fiance that abuses her even worse than her family, and one moment of instinct landed her in Ravenhold. Otherwise known as supernatural reform prison. Unlike others she’s there for a one time thing that she did unknowingly. Can she stay under the radar and gain freedom once more? She soon realizes there is far more to this place than expected. Strange things keep happening, and she keeps being drawn to three other strong “students”. Something sinister is afoot, and there seems to be an imaginary clock counting down. Here’s hoping she can figure out exactly what’s going on and who is behind it in time!!! Be warned, there is a cliffhanger!!