Puddin’ on the Blitz 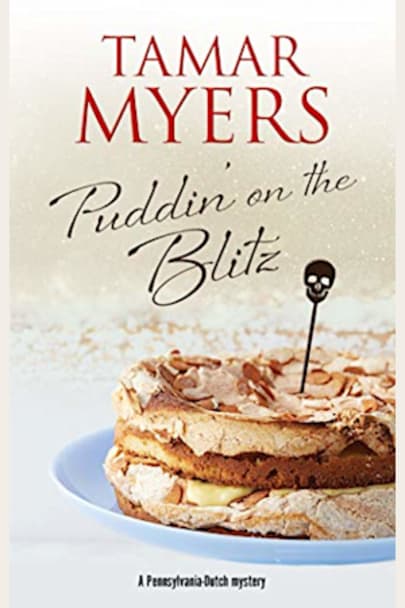 The success of Magdalena Yoder’s new Amish-Asian restaurant is threatened by murder in the deliciously quirky new Pennsylvania-Dutch mystery. Although the culinary fare at Magdalena Yoder’s new restaurant, Asian Sensations – a unique combination of Asian and Amish cuisine – is not to everyone’s taste, the good citizens of Hernia are unanimously agreed that the desserts concocted by the … concocted by the restaurant chef, Barbara Hostetler, are to die for.

Not literally however. When a guest at the PennDutch Inn drops dead shortly after consuming a slice of Barbara’s delicious Blitz torte, Magdalena finds herself arrested for murder. Did someone deliberately set her up? In order to clear her name and protect her nearest and dearest, Magdalena must identify a ruthless killer – before they strike again.

You gotta love the title puns and zaniness!

Tamar Myers has a real winner in this Pennsylvania Dutch series. The titles, the character names, the zany antics: all set this series apart for me. I mean, a sleuth named Magdalena Portulacca Yoder! I introduced my sister to the series several years ago and she loves it more than I do!

Be prepared for snark, lovely characters and a hotelier who can’t be kept down. I love how she treats her clients and takes charge! Magdalena is one strong-willed woman.

This, the 21st of the series, is not as strong as her earlier books and, if you are new to the series this one might not work as well as a stand alone. Magdalena Yoder is an acquired taste. Her heart is in the right place but her sarcasm can rub people the wrong way. She speaks her mind sometimes to her detriment. I have enjoyed all of her books and series over the years and I like her sense of humor as a change of pace.
In this outing, Magdalena has added a restaurant to her Inn which serves Amish-Asian Fusion food. She has hired a baker who makes deserts to die for. Did one literally die after eating one of these wonderful creations? The restaurant had been closed so a couple could have the place all to themselves and Magdalena was quick to take their money. What could possibly been on the menu that could poison anybody? Soon the poison is pinpointed and they discover that the couple are not at all who they claimed to be. So who were they and who wanted them dead? Not Magdalena but she’s the one being told to strip to her birthday suit and submit to a full body search. No way will she turn in her kapp and wear an orange jump suit. Time to gather her family and friends and hunt down the killer.
The mystery, the characters and the humor are why I have enjoyed this series. They are the reading getaway that I need when I need a change of pace. Works every time.

From Severn House comes the 21st book in the “A Pennsylvania-Dutch Mystery” series by Tamar Myers.

I had high hopes for this cozy book series, and Puddin’ on the Blitz in particular. The description of the book and the fact that it was the 21st in the series suggested that it was well written, popular, enjoyable, and entertaining.

Unfortunately, the enjoyable and entertaining part was extremely disappointing.
I found the main character the most objectionable, even though all of them are not nice or even good people. The entire story from start to finish was confusing, and at times entirely or perhaps deliberately misleading and not in the way a good cozy is meant to be. I thought that this might be due to not having read any of the other books in the series, so I went back and read others. However, this proved to make matters worse. None of the characters are likable; they are undoubtedly unbelievable. The mystery is more or less a side note, with no clues or real suspects, and is so infrequently mentioned as to be non-existent. Usually, I can find at least one good character in a cozy book series that I enjoy, but in this case, I could not find a single one that wasn’t objectionable in one way or another.

The only redeeming part of the book is quite literally the end. There were some action scenes and some semblance of a murder mystery in the last few chapters. But there was never any doubt of the killer’s identity or even the motive behind it. From what I could discern in this cozy book series, the main character of Magdalena is rude, obnoxious, self-centered, has fits of rage, childish, immature, jealous, and vain. She is as far from the good simple Christian woman she professes to be as would be humanly possible and is an insult to Amish and Mennonite women everywhere.

I cannot in good conscious recommend Puddin’ on the Blitz or this cozy book series to anyone. No matter how hard I tried, I simply could not come up with any reason why a mystery and cozy reader would enjoy this book or these characters.