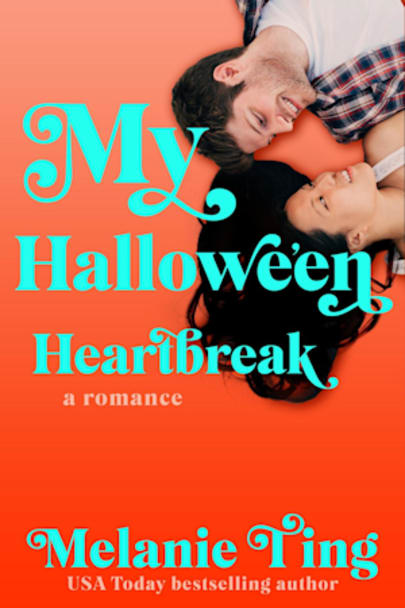 “Melanie Ting can always be counted on for laughs, sexy romance, and unusual heroes that you end up falling in love with.” USAToday bestselling author, Kate Willoughby.“Every time I read a story by this author I’m impressed with her ability to combine exciting hockey with genuinely likeable characters.” All About Romance My Hallowe’en Heartbreak It’s officially the worst Hallowe’en ever. First, … Romance

It’s officially the worst Hallowe’en ever.

First, Sophia Ando gets a demotion at her big law firm. Then she discovers her boyfriend making out with another woman at a Hallowe’en party. The cherry on top of her disastrous evening is when her rideshare home is driven by Henry MacDonald—her childhood friend and secret crush. Dejected and dressed as a goofy anime character was not the look she wanted when she saw Henry again.

Henry MacDonald isn’t thrilled to see Sophia either. He’s just quit the indie rock band he spent the last decade with. He’s turning thirty, has zero career prospects, and worst of all—he’s lost the spark that inspired his music. Being her chauffeur won’t impress the most accomplished person he knows—even if she is currently a rain-soaked Pikachu.

As a distraction from her disastrous life, Sophia decides to make Henry her next project: helping him find work, a recreational hockey team, and even a girlfriend. The only problem is that Henry prefers the matchmaker to the matches.

My Hallowe’en Heartbreak is the second book in the Holiday Hat Trick trilogy, but can be read as a standalone. This trilogy features three close girlfriends, crazy hijinks in the pursuit of love, and beer league hockey—all set in the wintry capital city of Ottawa. Each story is set around a holiday.

Melanie Ting has written such an engaging romance in My Halloween Heartbreak. Peopled with characters who feel so real, and who are so likeable, this book is a lovely slice of life. Heroine Sophia could be your best friend. She is smart, successful and kind, a dedicated lawyer. Hero Henry is an indie rock star who is trying to sort out his life and career, and he seems to inhabit a different world from his childhood friend, Sophia. However, their bond runs deep, and when Henry runs into a teary Sophia after her Halloween heartbreak, their friendship blossoms into something deeper. I really enjoyed living in the world the author created, and I look forward to reading more in this series.

A wonderful, entertaining story. Fun, funny, enjoyable read about Sophia and Henry. Loved the characters! Could not put it down!!!

I adore Melanie Ting books, so I was so happy to get my hands on My Hallowe’en Heartbreak! There is so much goodness packed into this story.

Sophia Ando is having the worst Hallowe’en. She’s taken off a project at the law firm she works for and she goes to a party with her boyfriend Elliott that night and ends up finding him with another girl in the bathroom. Clearly she ends things with him then and there. Now stranded at the party and dressed as Pikachu, she’s got to find a ride home. Never fear, a rideshare service to the rescue!

Henry MacDonald has been part of the music scene for years. He and his band have been touring, but he’s having writer’s block and he feels like he needs a break. After breaking the news to his bandmates, he heads back home to Ottawa. He still tries to write songs during the day, but he ends up driving at night to make some money, which is where Sophia comes back into his life.

The two childhood neighbors, and Sophia’s crush for years, reconnect and begin to spend more time together. Both of them have things going on in their lives, but they really seem to get one another and they really are each others yin and yang. They bring out things in each other that no one else seems to be able to. Half the battle is that they feel comfortable enough with the other to be totally honest. The big question is, can they make something romantic work between them?

This romantic comedy was so enjoyable! It was laugh out loud funny and it genuinely made me smile. The characters were likable and I found myself wanting to root for them in every way possible. I’m really looking forward to the next book in this series as well!

My Hallowe’en Heartbreak is the second book in the Holiday Hat Trick series featuring three friends that each find love. Each book can be read as a standalone, but I think it may make more sense if they are read in order.

Henry and Sophia were former high school friends that lost touch. On an exceptionally bad Hallowe’en, Sophia is reunited with her former secret crush and Henry is less than thrilled to see his incredibly driven friend at a time when his musical career has stalled. After her horrible Hallowe’en, Sophia is excited to focus her energy on Henry rather than herself.

Melanie’s books are always a delight to read. The Holiday Hat Trick is a special series as I love Abby, Sophia, and Em, but Sophia’s story really touched me with the small cultural nods that Sophia experiences as a Japanese-Canadian. Melanie beautiful writing had me laughing, moved me to tears, and pulled my heartstrings with the nostalgia of old high school memories. I highly recommend this book and am excited for the next book in the trilogy to release!

*I have received a free ARC from the author in exchange for an honest review.*