Meet You in the Middle 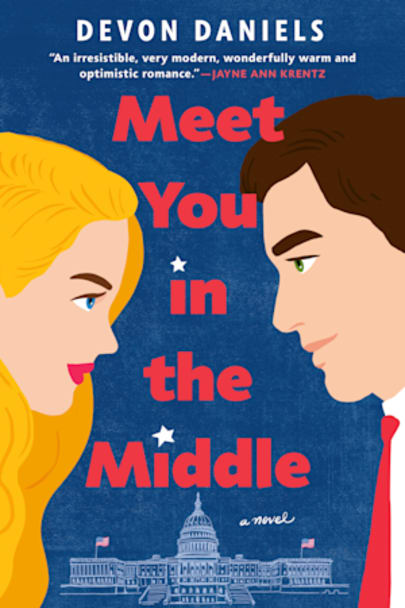 What happens when the person you find most impossible becomes impossible to resist? The Hating Game meets The West Wing in this hilarious across-the-aisle romantic comedy debut about America’s least likely couple.   There’s just one thing standing between liberal Senate staffer Kate Adams and passage of the landmark legislation she’s been fighting for all year: Ben Mackenzie, intimidating … year: Ben Mackenzie, intimidating gatekeeper for one of DC’s most powerful conservative senators. After Kate and Ben lock horns in a meet-not-so-cute, they vow to take each other down—by any means necessary.

Their ensuing power struggle gives new meaning to the term office politics: prank mail, spying, bets gone awry—nothing’s off limits in their battle of wills. She thinks he’s arrogant (and doesn’t deserve those gorgeous green eyes). He thinks she’s too quick to judge (and irresistibly distracting). But as their endless game of one-upmanship becomes Kate’s favorite part of the day, she starts to wonder if her feelings for Ben are closer to attraction than animosity…and maybe their sparring is flirting. When Kate realizes there’s more to Ben than meets the eye, she’s forced to confront her biggest fear: In her sworn enemy, she may have found her perfect match.

Perfect for fans of Sally Thorne and Jasmine Guillory, Meet You in the Middle is a modern, heartfelt and hopeful romance that hilariously explores what happens when you fall in love with your political polar opposite.

If you love sexual tension and enemies to lovers this is the book for you.

Daniels had me hooked with the first line and I knew immediately I was going to really connect with Kate on a deep level.

This book had me laughing so many times (and I’m not usually much of a laugh out loud reader) and a couple times I put down my Kindle to just bask in the moment. The banter in this book is incredible and isn’t all verbal either. Watching these two spar was the best. They are both so good at the comebacks.

I thought Daniels did a good job of involving politics without getting too terribly political. I’m not into politics but still loved the book.

I really loved the settings in this book. It has me wishing I could head back to D.C. I’ve only been once, but now I want to go for a walk on the Mall.

Ben is my new favorite hero. I mean he is grumpy and egotistical but he is also amazing. I can’t say more without spoilers, but I loved him. And Kate was amazing in her own way. I thought she was strong, independent, and feminist but as you read and get to know her you learn so much more.

This book is so full of amazing moments of humor, romance, and steam. I wanted it to last forever and immediate wanted to reread.

Thank you Berkley Publishing, Netgalley & Devon Daniels for #gifting me a copy of this book.

I have to be honest, I put off reading this book because I was just over politics after the last year. With that said, I think that this book did a marvelous job of keeping politics out of a book surrounding politics. This can easily be read and enjoyed by everyone, no matter what your political affiliation is.

What I enjoyed about the book:
Enemies to Lovers AND Opposites Attract…. YAAAAS Please!!!
The back and forth banter was great to watch! It’s what I love in a romcom
A great mix of romcom with a bit of seriousness
I appreciated Kate’s background and how her upbringing affected her outlook on life
I ADORED Ben’s character and what he stood for
There’s so much build up and angst, but in the fun romcom way!
I loved how it all came full circle in the end. Don’t worry… I won’t spoil it

I just wish that there would have been another chapter or two before the epilogue. I really craved to see how everything shook out in Ben & Kate’s day to day life.

Really loved this! Smart, funny and romantic. A liberal heroine vs a conservative hero sounds like a disaster but instead, it’s a lovely reminder that politics are more gray than black and white, and that everyone wants the same thing but maybe have different ideas on how to do it. The author did a wonderful job and had me laughing at myself at times.

Ben and Kate find themselves on opposite sides of the aisle and more than a few issues when they’re working for Republican and Democratic Senators on the Hill. When Ben refuses to entertain Kate’s Bill pitch and Kate says some choice things about Ben in response, the two start an inter-office rivalry that eventually becomes too fun to stop. The mail feud becomes running together on the Mall and bets that lead to homecooked meals, and eventually the two are questioning whether they’re enemies, friends, or something more.

This book is a modern, bold take on the enemies-to-lovers trope, set in my hometown of Washington, DC. I think Ben and Kate’s banter was off-the-charts, full of chemistry and humor, making me laugh out loud at times. This book is such a good slow burn, and the ending is stellar. I think it’s an extremely brave, creative spin on a classic and fan favorite trope that the author executed extremely well. I really enjoyed this book, would reread it, and recommend it.

If there were things I could change, I’d probably suggest a gender swap or dual POV to maybe make the book more palatable for people who can’t seem to get past the politics, though I understand why the author made the choices she did. It’s written from the viewpoint of a liberal female in a Trump America, and I can imagine it might be hard for the author to switch that around. Also the epilogue is a waste of space. This book definitely doesn’t deserve all the hate and one-star reviews it’s getting (most of those reviews are from people who haven’t even read the book, or who prejudged before trying it), and I’m tempted to spend my space here doing a point-by-point rebuttal. But I’d like to focus on the positives of this book, which are that it’s hilarious, highly original, full of chemistry, and ultimately has a great message about getting to know people before judging them.

Thank you to Berkley and NetGalley for my eARC in exchange for an honest review! All thoughts and opinions are my own.

Devon Daniels debut novel, MEET YOU IN THE MIDDLE, is an enemies-to-lovers office romance with a political spin. Daniels has an engaging voice that drew me right into her story with laugh out loud moments and snappy back and forth dialogue between main characters, Kate and Ben. I was excited to read this book for a variety of reasons: the subgenre, adorable cover, and the idea that Kate, a Democrat, and Ben, a Republican, could find middle ground as they fell in love. This idea of taking time to see past political parties was intriguing but, in the end, not very well executed.

Ben and Kate really are adorable together. As mentioned, their witty banter was exactly what I’d hoped for as were the laughable moments. As both characters work for a U.S. Senator, there is a lot of insider-type info that Daniels weaves into the narrative in an informative way without dumping a lot of information. Their meet-cute is fiery and introduces readers to the steady, somewhat stoic Ben and Kate, a successful woman who has written her first bill for her boss to take the senate floor. With the bill basically dead in the water, Ben has no trouble letting Kate know she is wasting her time when she meets with him in order to procure his boss’s vote. This results in a hilarious month of pranks meant to embarrass each other. This leads to them eventually becoming frenemies.

As I read there were a few things that stood out in a negative way. Probably the most important is that MEET YOU IN THE MIDDLE should have had a dual POV narrative rather than the entire story being told by Kate. I have no issue with a single narrative, but this story needed to hear from Ben. Instead we get Kate’s perspective of Ben, which is that he’s a really steady guy who isn’t apologetic at all for his Republican beliefs while appearing to have an open mind. Usually this is a great thing! Swoony romance heroes for the win every single time—and make no mistake Ben is swoony. What he’s not is a hero meeting his heroine in the middle. At least that’s how Kate tells it.

MEET YOU IN THE MIDDLE is a slow burn romance as Kate battles with herself to see beyond Ben’s Republicanism. The further into the book the less we hear about Kate as a professional woman and more about all the reasons she can’t fall in love with Ben. There’s little substance to this battle as Ben and Kate don’t really talk about their differences. The focus is more on the fact that they happen to have different political beliefs. As Kate seems to unravel emotionally over this, the perception that Ben lacks any emotional vulnerability creates an imbalance. The fact that he sees no problem with Kate being a Democrat just adds to this, resulting in her appearing immature.

Overall, MEET YOU IN THE MIDDLE is entertaining with lots of laugh out loud moments, but fails to meet its potential.

Thank you to the author and NetGalley for an advanced copy of MEET YOU IN THE MIDDLE in exchange for honest feedback.