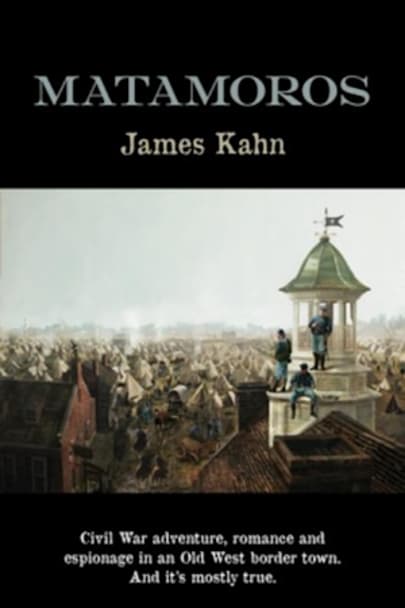 By 1862 the Union had blockaded all Confederate ports. Just across the Rio Grande from Brownsville, Texas, Matamoros was the only harbor where the South could ship its cotton to Europe, and smuggle in arms for the rebellion. So it was a haven for Yankee and Rebel spies and diplomats, gunrunners and cotton smugglers, runaway slaves, bandits, Texas Rangers, and rogues of every stripe.But Matamoros … Matamoros was also full of French Foreign Legionnaires – because that same year, Napoleon III had invaded Mexico, to install Archduke Maximilian of Austria as Emperor. Set against the backdrop of two wars, this is the story of Clay – an expatriate Southern gentleman running a gambling hall – and Allie, his ex-con artist partner, bringing her cotton train to market – in a star-crossed affair that may or may not survive their conflicted allegiances amidst the tides of battle.

Thank you HFVBT and the author author for a complimentary copy. I voluntarily reviewed this book. All opinions expressed are my own.

*REVIEW*
Matamoros is truly a unique story. The title, Matamoros, is actually a town just across the Mexican border and the Rio Grande. It is 1862, and the Civil War rages on, but the South have a big problem with the Yankees blocking all ports. Matamoros, however, is in Mexico and Yankee free, so the South use the town to export cotton to Europe and import ammunition, etc. All of this activity has turned Matamoros into a melting pot of people with varying nationalities, ideals, allegiances, morals, etc. The Brave River Gambling Emporium is a sort of meeting place, an intersection, of all the differences. Clayton Wilkes is the owner, and he is quite the remarkable character. He tells much of the story, but we also learn about him through the other characters, such as Isaac. Clayton is interesting because he is seen through numerous perspectives, so his characterization is thorough. Allie is another great character, as Clayton’s lady friend and partner in crime, for lack of a better word. This is the type of story where anything can and will happen. It’s not predictable, and it’s also not a short easy read. Matamoros is lengthy and complex with numerous characters, but it’s actually easier to follow than it sounds. This book is perfect for Civil War enthusiasts and historical fiction readers in general. I enjoyed it much more than I anticipated, and reading Matamoros is definitely worth the time invested. I highly recommend!

Welcome to Throwback Thursday where we visit a Gem either from the past or set in the past. This week’s Gem is rough diamond set in pure silver. Matamoros is a silver town just across the border in Mexico. Go there now and you will see lots of touristy bazaars, silver jewelry, pretty children, cantinas, fountains, this is the Matamoros I remember from a few decades ago. But this Matamoros that you hold in your claw, it quite different. It is from the time of the American Civil War. Here there is danger, espionage, adventure, money to be made, romance to be won, this is a border town unlike any other. This is Gem Maker James Kahn’s Matamoros!
If Kahn’s name sounds familiar to you, think Indiana Jones and the Temple of Doom or Return of the Jedi. Matamoros is his first venture into researched historical fiction and he has hit one out of the park. It is not a short read, it is not an easy read, but it is a realistic read with colorful characters whose lives really happened. Gamblers, gun runners, thieves, officers and gentlemen, blackguards and hustlers and one does not necessarily mean one is the other. There are ladies, too. Some are innocent, some soiled doves. Some are devoted wives, some are saintly nuns, one may or may not exist at all.
Kahn has taken Matamoros and unfolded her in all her infamousness and she is a site to behold. He does not rush, but allows us, dear Book Dragons, to get to know his main characters Clayton Wilkes and his partner in crime, Miss Allie, through the eyes and encounters of the notorious and the nice, the rough and the righteous. Matamoros is the town where the South will do it’s main trading and importing and exporting free of interference from those Damned Yankees and Clayton will make his fortune.
This is a book for those who love historical fiction at its finest. For those who love tales of the Old West, Old Mexico or the American Civil War and a way of life gone too soon for some and not soon enough for others. This is a book you will want to take time with, but that is okay, because, you will need to. Kahn may very well be the James A. Michener of our time. currently priced at 2.99 on Kindle and very reasonably priced in paperback, I would say spring for the paperback, this one’s a keeper.
Until tomorrow, I remain, your humble Book Dragon, Drakon T. Longwitten
I received a copy of this book from Pen Wild Press via #hfvirtualbooktours as part of the tour for “Matamoros”. This is an honest review of that book.

Welcome to the Brave River Gambling Emporium in Matamoros, south of the border, across the Rio Grande River from Brownsville, Texas. Your proprietor is Clayton Wilkes. The year is 1863. The Civil War is underway. Clay is described as 38-years old, “straw-colored hair, clean-shaven face, a Louisiana lilt and a bent nose from a long-ago drubbing.” Contrary to what you’d expect for the location, “…he dressed in the finest suits of London silk or linen.” The clientele is a rough and tumble assortment of characters. In addition to the humans, a stuffed giraffe presides over the bar, part of Clay’s “big misfit family on the river.” The Emporium is the book’s home base, but Clayton Wilkes’ influence extends way beyond that humble establishment, as the rest of the story reveals.

The author devotes a lot of attention to presenting the complexity of the main character through an eclectic assortment of interactions with other characters in the book. Aside from Clay, the two other most notable characters are Isaac and Allie. Isaac was a slave belonging to Clayton’s father. As a free man, Isaac is like a brother to Clayton, and his mission is to form a nation of freed slaves within Mexico. I don’t think it would spoil the reader’s pleasure to say that Clayton and Allie’s story is a big part of the book. It would seem what they like most about each other, and what they like least about each other are their similarities. Expect thievery, cons, and spying. I loved the spy versus spy storyline, and I can remember the feeling I had when this book caught fire in my soul.

This is a big, detailed, complex, layered book filled with a robust vocabulary and surprising plot twists. If you’re looking for a gentle, easy read, this is not the book. You can even expect to learn some Spanish. One of my favorite characters in the book is a minor character, a military spouse named Mildred Bee. Her catchphrase is a saying that was once popular, “I have seen the elephant.” Wikipedia reveals that the meaning of the phrase refers to “gaining experience of the world at a significant cost.” Maybe instead of cost, think of it as an investment. For me, that significant investment entailed following the huge cast of characters and the transitions, so I recommend reading this book in a quiet, undistracted setting.

I’m always on the lookout for spiritual and supernatural elements in a story. I also like it when a historical novel focuses on technology that is new at that time. In this book, that technology is photography. I loved how the spiritual element develops by the ending of the book. There are mentions of an apparition, and several times the French Order of Nuns of the Incarnate Word and Blessed Sacrament float “across the landscape like stray, ungraspable thoughts.” How curious, and here’s another quote, one of many regarding the legend of la llorona, “…the Weeping Woman had killed her own children, then drowned herself out of anguish, and now wandered around lakes and rivers looking for new souls to claim.”

Amazingly, the author has released a CD to accompany the book, which I’m listening to as I write this review. It is classified within the folk genre and features many influences from other genres as well. Most of the 14 songs are character sketches. Listening to the CD on top of reading the book dramatically adds to the overall experience of Matamoros, and the music is very pleasing to the ear. What a brilliant idea to create musical accompaniment for a book.

It’s ironic that an intricate, complicated book also includes words like “codwallopped.” Our tough-guy main character tenderly says to a pigeon, “Madeira, you’re my favorite, but don’t tell the others.” Expect an ironic ending. Invest in Matamoros.

A complicated world of politics, greed, power and love. A great story in the LONESOME DOVE tradition of interesting characters playing out their part in history. Soldiers, scoundrels, spies and pirates. Loved it!