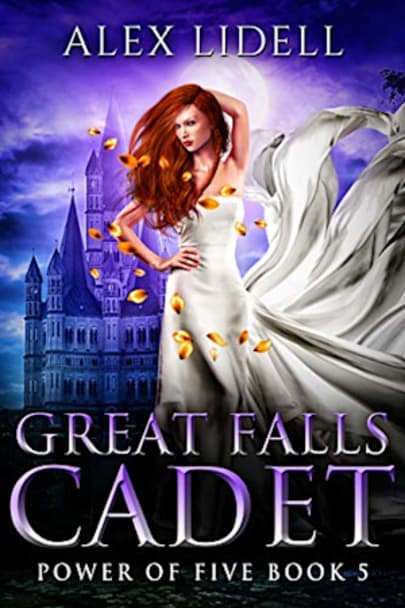 One elite fae warrior. Four superior officers. A bond they can’t resist. Lera was once human. Now, with dark magic leaking into the mortal world, the petite fae warrior must return to protect it—even if it means going undercover with four powerful fae males to a harsh military academy. But when a terrible accident melds the males with their human disguises, everything changes. Can Lera make the … Can Lera make the warriors remember themselves, their mission—and her—before the entire mortal world pays the price?

River, Shade, Tye, and Coal can’t overlook the beautiful new cadet, but when Lera starts breaking rules and ignoring orders, the four senior officers intend to put her in her place. Lera will learn or she will quit—that is how Great Falls Academy works.

GREAT FALLS CADET is a full-length POWER OF FIVE reverse-harem tale from Amazon top 100 author Alex Lidell. It was initially released in three installments, titled RULES OF STONE, CRIME AND PUNISHMENT, and SCENT OF A WOLF. CADET is the fifth book in the POWER OF FIVE full-length series.

I’ve said it before and I’ll say it again. I love these characters and this overall story but the lack of progress in the males remembering Lera is driving me bonkers. I just need one to remember her. I can’t take it!

I read (and reviewed) these when they were originally released as separate tales (Rules of Stone, Crime and Punishment and Scent of a Wolf). They’re each 5-star stories, superbly written and totally fun. I more than happily highly recommend this 3-in-1 version for those new to the series.

It’s been a while since I read the previous books but I was drawn back into their story quickly. You don’t need to have read the previous books to follow the story, but I would recommend it as it adds to their history and shows how deep their relationship is. Well written description that keep you turning page after page. I can’t wait to get my hands on the next book, I need to know how their story continues!
This book had me wanting to cry for Lera, her men don’t remember her after crossing into the mortal world in order to help save it, that wasn’t how it was suppose to be, they were going to work together as a quint should. Everything she does to try and help just seems to go wrong but she refuses to back down and she refuses to leave her men.

This is a truly amazing adventure now If you have read the Power of Five then all you need to know is this takes place 6 months later and you need to get it! Lol end of review for you lol
For everyone else I’ll tell you more about it. Like it say this story will be in episodes you get 3 in this book and continues the story so there will be chiffhangers but the storyline is amazing and the authors writeing fantastic. This story is about Lera or Leralynn she used to be mortal and from the mortal realm until her fae man came for her now she is an immortal fae all that is in the series power of five. An amazing series too.
She became part of a sanctioned quint the other four fae warriors and all her men are River who is king, Shade a wolf shiter and healer, Tye a tiger shifter and Coal. All immortal and very powerful. Together they are the most powerful quint ever.
They have been told that the mortal realm is in danger . The protection wards are cracking. There job is to find out why and stop it. In the mortal realm they will not have here powers. All they will have is the chameleon veils. It will give them id’s and make them look like humans not fae. There are some bad things with it they will not feel Thier bonds and they must take off the veil every day or it will take them over making the forget who they Realy are.
So off to the mortal realm they go only on the way there something happens . She is separated from them when she come to and get to great Falls academy alone. Everything has changed and she is the only one that remembers the mission and who they really are.
When she finds them River and Coal want to make her leave the academy because they can’t handle her being they. Tye is a big flirt always around a human princess that thinks she owns him. The only good thing that’s happened is while shade doesn’t remember her his wolf does. Only when he changes back to human form he thinks he lost time. So no help there.Leralynn I really having a hard time with all of this. Did her men ever love her was it just the magic? Without them around she is getting into more and more trouble, thing are getting worse and time is running out.
What’s is she going to do? Love the characters, drama, mystery, intrigue, action and more This story has. It’s amazing.the next Volume will hold 3 more so. I have read them as singles already and OMG wow they are not to be miss to.
Voluntarily reviewed I love this series and getting them is audible too. What an amazing adventure with spice too