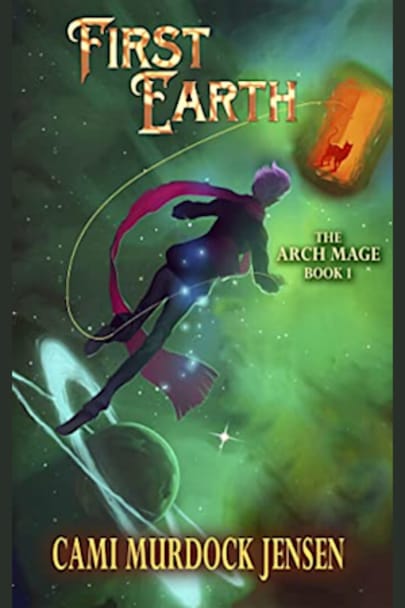 The moment I declared the last word, I felt a rush of wind from every direction, as though the power surge in my chest sucked energy from the entire Earth. The hurricane of energy imploded into me, and silence caused a still calm to fall onto the room. My skin tingled. Not like neuropathy, but like warm static electricity.”Whoa,” I whispered.I expected an adventure when I left home for a new … internship. A nice, easy, comfortable adventure that a sixteen-year-old burn victim like me could handle. That wasn’t what happened. While I translated an ancient text for my new boss, a woman possessed by a ghost tried to kill me. Then an old wizard saved me by taking me to another planet. Saved? As if. Kidnapped is more like it-and that’s just the beginning.According to him, I was the only wizard on my planet, and some prophecy destined me to save his planet, First Earth. The guy was crazy to think I could do anything like that. I could hardly walk more than ten minutes because of my neuropathy.Maybe I should just go home and forget about being a wizard. How am I supposed to save a whole other planet, with magic I don’t know how to use and an army of demons led by an evil necromancer trying to murder me?Fate seriously messed up this time.

She is different to everyone around her, she has scars and nerve damage to her legs as well as being able sense when someone is lying. She can read any language even if she cannot speak it. She goes to help translate a tablet in a strange language but she is attack. She is then taken to a strange world. What will happen there? Can she get back home? See how this new adventure take her

I absolutely ADORED this book! It is amazing; the story kept enthralled from beginning to end! It’s exciting, action-packed, and emotive. And it even includes a powerful lesson about loving yourself that anyone, young or old, can benefit from.

Agnes is a wonderful character, and I love how she evolved throughout the story from a self-effacing individual who struggles with self-loathing into a self-confident, selfless young woman who finally accepts and appreciates her own worth. Temnon, too, is a wonderful character. He’s brave, selfless, loyal, and kind. I would be hard-pressed to say which of the two was my favorite.

Beautifully written, with well-drawn characters and a thoroughly engrossing story. You can’t ask for more from any book. I’ve told my 14-year-old that this is a must-read! Yes, this book is perfectly appropriate for younger teens. Enjoy!

I really enjoyed this introduction to Agnes and the Mages of First Earth. It starts out as a typical summer where Agnes has hopes just like a 16 year old and then, all of a sudden she is off on an adventure of a life time. She goes from a scarred in pain normal girl to a world with magic, talking cats, demons, and a war to beat all wars. I loved watching Agnes come into herself amid the hilarious scenes, meeting new people, battles, magic, and the craziness that is First Earth. Loved it and need the next one as I was hooked from the beginning and had to figure out along with Agnes what was going on. And do not forget the magic!! A great story filled with amazing fun and scary characters that were a blast to read about.

This is a fantastic read. The author does an amazing job of painting this new world. We see the magic that radiates from the simplest things, feel ourselves riding a majestic dragon, and wonder if we really heard a talking cat. Just as clearly we can feel the grasp of the enemy as it closes in and threatens to strangle every last breath out of this same enchanting world. I warmed up quickly to her two main characters, Agnes and Temnon. Agnes struggles all her life because of the scars left from her childhood accident, and so balks at the idea she’s meant to take on any significant role. On the other hand, Temnon appears to have the world’s fate on his shoulders from the first meeting. On the surface, he’s amazingly calm about it and steps up every time. The two find defeating the threat will take both of them digging deeper than they thought, getting past the insecurities that hold them back, and seeing things as they are. It’s a great story that shows the value of friendship, love, sacrifice, and courage that’s full of action which keeps the reader on the edge of their seat.

Nothing but good to say about this book! Powerful themes of self acceptance and embracing change, well-developed relatable characters, magic and science, epic battle sequences, and a solid ending! I loved following Agnes as she discovered her talent. The author gave clues, and I figured it out before it was revealed, but this did not by any means diminish the moment or the suspense. The target audience is high school/teen-aged readers but as an adult I loved this book as well. No sexual content, swearing, or overly graphic scenes makes this book appropriate for even the most sensitive readers while remaining exciting and well-paced. Well-edited, and I’m very excited about the upcoming release of book two!!!

Although it started a little slowly and predictably, this book quickly morphed into a unique and exciting story full of self-discovery and growth. By the end I stayed up a bit past my bed time to finish. In challenging herself to do more and find better solutions, Agnes brought out the best in those around her as well. This book reminded me a bit of The Magicians Nephew by CS Lewis and The Story of the Treasure Seekers by Edith Nesbit. Totally different story but a bit of a Wrinkle in Time feeling too. I guess the underlying themes would be where the comparisons come from.

Exciting read appropriate for middle grade readers and up. The worlds and characters Jensen has build have a lot of potential and I’m excited to see where this series will go next.

Delightfully unique story. At least it seems to have rather unique features. Agnes is great. Temnon is a bit impersonal. Many predictable and unpredictable events.

I received a copy of this book as a gift. This is my honest review.

This book was entered in The Wishing Shelf Book Awards. This is what our readers thought:
Title: First Earth
Author: Cami Murdock Jensen

Readers’ Comments
‘I loved this book so much. I loved that the girl had physical problems but could still be the hero of the book. Very exciting with a fab ending. I’m going to read the next book.’ Girl reader, aged 15
‘I think Harry Potter fans will like this book. It’s different to the boy wizard books but there’s still a ton of magic in it. First Earth is an amazing setting too. Very fast paced with interesting characters, this is perfect for fantasy readers aged 12 – 16.’ Boy, aged 16
‘Everything you need in a fantasy adventure: peril, cool – rather odd – characters, a twisting plot and lots of magic. Enjoyable read.’ Girl, aged 15
‘Loved it. I will read the next book.’ Girl ,aged 13

To Sum It Up:
‘An epic fantasy adventure full of twists and turns. A FINALIST and highly recommended.’ The Wishing Shelf Book Awards

First Earth (Arch Mage series book 1) by Cami Murdock Jensen is a 5 star read.
Agnes Ann Cavanaugh is 16 years years old and covered in scars from an accident when she was a baby in which her father died saving her life. She has come to Boston to intern for Dr Buchanan a blind history professor at Boston University in the hopes of gaining a scholarship, when an exciting tablet arrives from England, Agnes and the Dr go to look at it hoping Agnes will be able to read it, when she touches the tablet everything changes for her and she finds her destiny is much bigger than she thought. Along the way she meets Temnon a high mage of another Earth and his talking cat Grimmal who is much more than your average feline.
I loved this story, it captured my attention from the very first page and I struggled to put it down, my only disappointment is having to wait for the next book in the series.
I voluntarily reviewed a gifted copy of this book.