Falling: Book 3 After the Thaw 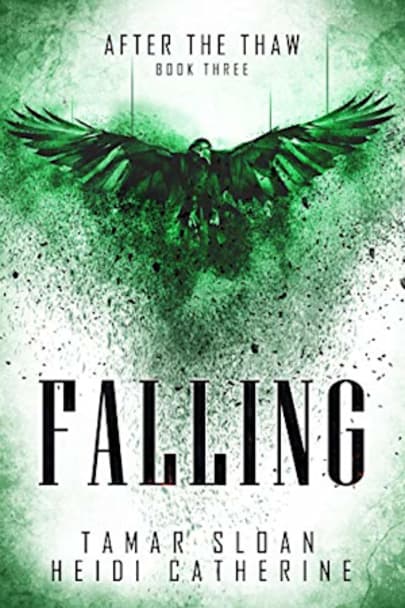 Only the chosen shall breed.Nova, Kian, Dex, and Wren. Four divided hearts. Four teens no longer sure what they’re fighting for. Their society was meant to mold human evolution. Their future, and that of Earth, was to be decided by the kindest and smartest. Askala was supposed to be a beacon of hope in a flooded, desecrated world. Except the line between the Bound and Unbound is blurring. The …

Except the line between the Bound and Unbound is blurring. The Outlands is no longer some distant, faceless world. And the Remnants have a leader who knows more about them than any Remnant before.

In a world devastated by global warming, the fight for survival has always been deadly. Now, the battle for Askala is about to define the very future of humanity.

But…does the greatest threat lie within?

Lovers of Divergent, The Hunger Games, and The Maze Runner will be blown away by the breathtaking final installment in the After The Thaw series from USA Today best-selling author Tamar Sloan and award-winning author Heidi Catherine.

Scroll up and grab your copy now!

Could hardly wait for the next one and very pleased they came out so quickly!

Following the tale of these four teens has been entertaining. Book two was a fantastic page-turner. I found this one much darker than the second. I will admit that I knocked it down a star because I didn’t care much about Kian/Nova’s story. I read through it quickly just to get to Dex (who is quickly becoming my absolute favorite male protagonist in YA so far, with Quinn from Breathe and Aiden from Renegades narrowly beating him out).

Everything seems to go to hell in this book, and I REALLY hate when people take power and the liberty to do whatever they want, no matter who or how much they hurt! It’s hard to read, which shows just how well developed the characters are. Nova, Kian, Dex and Wren keep changing chapters, which gives me some time to breathe in between…

I thought this was the last book in a trilogy, but I recently found out that it’s one more on the way! Yay! And the cliffhanger in this book… cruel! How long will I have to wait until the ending?!

* I received an ARC from the authors, and despite how I feel about being left hanging, I’m greatful for the opportunity to read and review! *

After reading the other books in the After The Thaw series as they were released I was eagerly awaiting the release of this book. This time the bird on the book cover is in green and fits the aesthetic of the other covers very well. I bet these books look amazing in paperback all together on a book shelf. I think they will definitely stand out on a book store shelf too.

In this book our favourite characters all seem to have to separate in order to fight for a future and favourable outcome for Askala. Unbound Nova pregnant by her Bound ex-boyfriend Kian feels neither she nor her unborn child have any sort of future in Askal and when she discovers their plan impulsively flees with Thom and Flick who is also pregnant. Thom cleverly adapts a raft adding a sail which he hopes will provide extra speed to their journey across the ocean to the Outlands. Unfortunately, they are not as far as they would have liked to be across the ocean when a bad storm hits. The very thing that had helped them now puts them at more risk as the lightening strikes ever nearer the pole the sail is tied to. Disaster strikes as they are all thrown into the sea. Flick and Nova soon realise they may have been seeing the prospect of the Outlands through “rose-coloured” glasses and are soon in trouble. The Askalan’s are quite naïve and seem to expect everyone to have the type of “be kind” ethic they have. They assume that people will help them for nothing in return which Nova and Flick are at first shocked by and then horrified when they realise what they may be expected to do in return for a favour. Luckily for them there are still some kind hearted people in the Outlands and they are rescued by a disfigured woman called Avis who has created a home in what is left of the city.

My immediate thoughts upon finishing reading this book were
Wow! ….just wow!
To sum up this book was as action packed as the other books in the series and there was so much action going on both in Askala and in the Outlands. The ending! What a cliff hanger! What a book! It left me with so many questions and theories. When is Wren going to remember to check out what Phoenix told her to? Is Phoenix going to end up with Flick or Shiloh….or someone else? I love Luca and how Nova & Kian seem to have officially adopted him! Will they need Dean’s remnant army after all? I am really looking forward to Avis reuniting with her children, and those children learning the truth! I bet that will be a bit of a tear jerker! What more can I say? . . .Oh …yes….when can I read Reckoning?

One more thing I honestly I wouldn’t compare this brilliant series to The Hunger Games & Divergent, hand on heart I love this series more!! There are a few small elements that are similar, such as there being factions in Divergent, districts in The Hunger Games and the Bound and Unbound in this series. I certainly agree with the comparison in that this series could be turned into films or a TV series, though I would want Tamar & Heidi to have a lot of input so it was kept true to the books. I think that it would be as popular as The Hunger Games & Divergent but in its own right as it has its own feel and uniqueness. Highly recommend reading this series, and I am both looking forward to reading more, yet at the same time dreading the series coming to an end.

without any doubt…. the Best Dystopian Series of this Decade

„Falling“ (Burning Series Book 3) takes on immediately after the events depicted in “Breaking”. Kian, Dex, Nova and Flick are still dealing with the consequences of the last Proving, which placed them on opposite sites of Askala’s social system. A system that divides its subjects either in Bound or Unbound. While the first are deemed fully responsible for Askala survival and its thriving, the later are “well cared for” but denied any fulfilling position in society and even the right to procreation.

The system which seems to have been working so well for so long, began to collapse as Nova was deemed unworthy and became Unbound and Kian was elected the new High Bound leader, while Wren (an outsider, supposed to lack the values Askalan worships so much) was declared Bound.

In “Falling” the events rush after another, as Wren infiltration role and possible betrayal come to light and Ronan finally comes back. All the while Nova, Flick and Thom have their own battle to fight, as they flee Askala in search of a new beginning. Everything will be called into question, revealing not only Askala’s flaws but also the appalling truth about everyday life and survival in the Outlands.

“Falling” is the most elaborate book of the Series until now (it is even possible? Yes, it is! This Series is getting better with each new book, the story is compelling, the characters very well developed, with an extraordinary well crafted and alarmingly credible world, that leaves a lasting impression in the reader, without disregarding the action and mere enjoyment a good story should always offer.