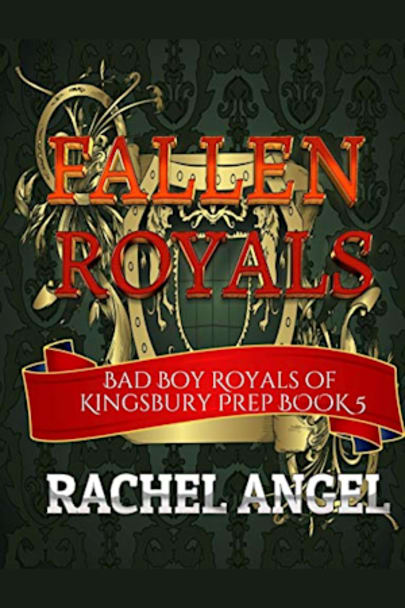 The Royals have Fallen…Series Description:Tempest Ryan was chosen to be the first commoner student to attend the highly exclusive and secretive school just for those of Royal Blood. Her succeeding at Kingsbury Prep would mean the end to the Royals’ reign. This could not happen. As the Kings of Kingsbury, we will make her leave. Tossing the Black Envelope is tradition. Now Tempest Ryan has … Tempest Ryan has received it, anyone in school can bully her. Make her leave. That’s the K3’s decree. That’s what she gets for trying to mess with us Royals. Kingsbury Prep is a 500 year old institution. Only those with royal blood can attend this school. A commoner like Tempest Ryan does not belong. We will break her, break her will, break her heart. She will wish she never stepped foot into Kingsbury. Only now, she is getting under all of our skin like a burn that can’t stop itching.

*** Kingsbury Prep’s K3 Royals have made it known they don’t want me here. Being at the receiving end of the notorious Black Envelope is no laughing matter. I’d learned someone had died from it. Another nearly died but left Kingsbury just in time. These guys are cruel. They started a war against me. Even though I am reeling from the pain, I have some secrets of my own. Love and Hate is a fine line, especially when they all seem to hate me, but can’t stop wanting me.

***Fallen Royals is reverse harem/mature high school bully romance novel. This is book five of six in the series. Contains foul language and sexual scenes; any sex featured is consensual.

WOW. This is an amazing read and a great continuation is this series. From the moment that you start reading you are taken away to a new world. It is exciting and fun to experience. The characters are amazing and you feel as though you know them personally. This has to be read, there is no doubt about it and as you come to the end you cannot wait to find out more.

Very great book but I need more! I loved this one but hated how it just ended with a huge Cliffhanger! I need more now!!!! I seriously can’t wait for the next book to come out! Loved this one so much!

Tempest’ (FMC) life hasn’t been without complications throughout this series and this book is no different. Especially when she finds out how distrustful someone she’s gotten to know is. Not that I couldn’t see that coming they were way too helpful and friendly. They didn’t sit right with me. Back at Kingsbury Prep trust is in short supply with both K3 (Ori, Kaz and Hunter) and some of the folks living in Arcadia. So tempers flare with Tempest right in the middle of it. I just love this series. It keeps getting better. Just a brilliant read

I swear just went I don’t think Rachel can top the last book she did it again with Fallen Royals! I love this series. Tempest is one cool chic and with all her boys at her disposal who want nothing more but to be in her good graces again. But there is something about Jordan that has me on edge. I need the next book to see what’s going to happen next. Are the K3 boys going to fight for Tempest or fight against her. I can’t wait to find out!

I am loving this series so freaking much and just absolutely can not get enough of Tempest and all her guys at all. It really does just get better with each book as Tempest does not back down without a fight. So dang excited for the next book as I need to find out what’s going to happen to them and where they are all headed. Loved, loved this!

Astonishing. While back in San Francisco with Jordan Tempest finds out her next door neighbor and pseudo grandmother Helen is Jordan’s and Kaz’s aunt and a Secret Royal. He tells her that he will marry Tempest. And that he is the next in line to be king.
Meanwhile back at Kingsbury something big happens and also we have Kaz, Ori, and Hunter regretting the things theyve done to Tempest.
When Tempest gets back to school will the K3 fight for her and will she forgive them we will have to wait to find out.

Ohhh yes I was happy to see this book waiting for me. So you know Tempest is still reeling from the fact that Helen is a Secret Princess. Jordan is professing that he is going to marry Tempest after dropping a huge bomb of information. Then while she is in San Francisco something major goes down at Kingsbury. Hunter, Ori, Kaz realize their mistake with Tempst. So what does she do? Will she forgive them. What is Jordan’s plan? So many emotions and secrets! the ending is a woozy so fair warnung. I cannot wait to see what the next book will says.

Tempest has so much going on I don’t know how she’s going to handle it all. What is Helen up to with Jordan. This was definitely a page turner couldn’t put it down once I picked it up. Cannot wait for the next one.

I received a copy of this book for a fair and honest review. I got this book just a little bit ago and head to start reading it. I had to know what was going to happen next. I read it all in one sitting and wondering what the book six will hold after this one. Tempest is back at Kingsbury after she has a dream and hears something has happened back at the academy and she heads back to see if she can help. She does end up talking to the members of K3 and Ricky. She even interacts most with the villagers that have come to see her as a role model. The book was a quick read but that ending has me worried and excited for some reason.