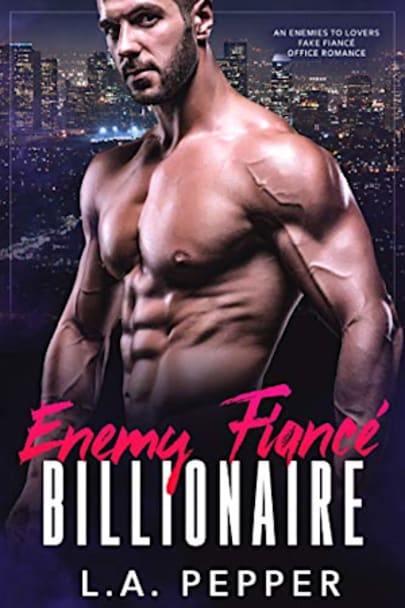 Chloe’s not sure how she ended up half-naked in a broken down elevator with her boss, or why she’s agreed to play the game with her arch enemy.
She’s smarter than that. She graduated from Princeton for pete’s sake!
All she knows that her heart beats fast and her blood sings around him.
The more time she spends with him, the more she realizes it’s not just an attraction to his rippled chest, but an attraction to his heart, and respect for his integrity.
This love terrifies her more than anything, so she runs away, back home.
Nick comes looking for her, in the middle of a snowstorm ready to get her back or let her go.

What if love doesn’t have to be a fight or trap at all? What if love is what sets you free?.

I received an advance review copy for free, and I am leaving this review voluntarily.

Chloe Beckett works for Worldly magazine as a feature writer. Her boss Rachel Rothenberg thinks of Chloe as her protégée. Nick Meryton is the founder and editor-in-chief of Worldly Magazine but he looks to Rachel for the day to day running of the magazine.

Chloe wrote a scathing exposé of Nick at her previous job at a gossip magazine. Face to face with Nick, Chloe speaks her mind to Nick, calling him out on his bs. Underneath it all Chloe has an attraction to Nick as he does to her. They hide their interest in their bickering. Late one night Chloe and Nick get stuck between floors in the elevator. Chloe has panic attack and faints. Nick talks tenderly to her helping her anxiety come down. Their time alone leads to even more tension between the couple. At Meryton Gala Chloe ends up caught between Nick and his brother. Being flippant she mentions an engagement and Nick jumps on it. He sees it as a way to solve issues for them both. Underneath his words he sees it as a way to get closer to Chloe. Can they keep their hearts out of this business arrangement?

Enemy Fiance Billionaire is an easy, enjoyable read. The bickering between Nick and Chloe made me laugh quite a few times. Nick was great at playing an arrogant @ss but L.A. Pepper has written him so we get glimpses of the real Nick. He’s a man in search of “home” and everything “home” encompasses. Quite often Chloe’s zingers hurt his feelings although he would never show it. Chloe is a smart driven woman. She works hard to be the best writer and has no problem standing toe to toe with Nick to share her ideas. I recommend this excellent romance.

Enemy Fiance Billionaire’s title pretty much says it all. This is an entertaining enemy to lovers romance with a few interesting twists and turns. Nick Meryton is Chloe Beckett’s boss at least in name. Chloe’s real boss is Rachel Rothenberg. Nick may own the magazine but Rachel is the heart and soul behind the scenes. Chloe is disgusted with Nick’s lay back playboy behavior. Nick finds Chloe’s stick in the mud attitude way too frustrating. Yet as things progress they will be forced to let go of their deference’s and work together to fool everyone with their fake engagement. Will their fake arrangement work or will their different points of view get in the way of their HEA? This is a book worth reading so read and enjoy.

An Entertaining Enemies To Lovers Romance

I loved this enemies to lovers story. Chloe takes a new job working for billionaire playboy Nick, the one she had written expose on. Then Nick and Chloe end up in an elevator together sparks fly between them. When Nick’s brother, David, shows an interest in her Nick gets jealous and says she’s his fiancé. Soon their fake engagement and things start feeling real. No spoilers from me! A great story filled with chemistry, angst and drama.

Chloe Beckett is relatively new at Wordly Magazine, where it’s all about world travel and luxury. Chloe wants to start a regular section called Home and focus on domestic locations. Her boss Rachel is on her side however, Nick Meryton is the Boss! Chloe has not minced any nice words about Nick and his celebrity status and in walks Nick while Chloe is going on about him. The papers call him the next big prize of the billionaires. Rachel keeps telling him he needs to tone things down but he listens to no one.
After an incident in a stuck elevator where the sparks were flying, Nick ignores her until at a gala where his brother shows interest in her. Nick sees red and goes to talk with Chloe and acts like they are together. Out of all of it comes the idea to pretend to be engaged, which should help Chloe get what she wants and also to help Nick’s reputation.
Feelings are not supposed to be a part of the agreement but can they both stick to that? Will they both get what they want?

Nick and Chloe keeps you glued to this story. She is a graduate from Princeton but finds herself working for Nick a billionaire playboy but looks are deceiving as she soon finds out. The feelings sparks between these two but Chloe doesn’t trust them especially when he claims her as his fiancé. Will they make it to the real thing and will it lead to a happily ever after for the two?

Chole has landed her dream job except her boss is the one and only Nick Meryton, infamous playboy she wrote an expose on. The next thing Chloe knows is she is in a fake engagement with him.
While the story was short, it was written so that I didn’t feel like I missed anything – all the emotions that one have when in their situation were there. A great book as always from LA.

I liked the story, it had love and challenges and progresses nicely to a happy ending. It’s a basic story with no big surprises so I don’t sing praise for it but it was entertaining.
No unnecessary descriptions of surroundings
Good dialogues
The characters is well written and developed in to different personalities

Narrator
Sadly I found this lacking, pronunciation is not always perfect but she read with feelings. I miss a male voice and since this narrator doesn’t do a male voice it’s hard to distinguish from the male and female characters.

My disappointment in the narrator could be part of why the story in itself didn’t reach the top.

I would recommend this story to those who like to see how the relationship comes together. I found the characters interesting and the story seemed over too quickly (which is better than dragging out too long).

I listened to the Audible version. Natalie May did well with the narration. Dual narrators would have helped set the character’s voices apart more for the dual points of view.

This was an enjoyable enemy to lover/fake fiancé work place romance. Recommend checking this out. Quick read.

A wonderful well written short feel good contemporary romance. This opposites attract storyline has complex, likeable, well developed characters with instant attraction. Its engaging from start to finish, keeping me interested with a fake engagement, drama, humor, enemies to lovers unexpected sweet, and emotional story. It includes a perfect epilogue that is narrated beautifully with clear and concise pronunciation really bringing this interesting story to life.

YOU DON’T KNOW WHAT YOU HAVE UNTIL YOU LOSE IT

Chloe and Nick are enemies after she writes an article supposedly exposing him and his ways. She has no idea what damage she has done to his social life. During a small spat over her with his brother, they arrange a fake engagement. It’s up to them to decide what their future holds. A story worth reading just for the ending.

This is great enemies turn lovers romance is well written and well told. I enjoyed L.A. Pepper’s writing style and her way with words, she created interesting storylines that are captivating from start to end. The characters are complex and well developed, they were likable and easy to relate to. Chloe moved from her small town to live in the city she loves her new job working for a Travel Magazine, it features world travel and she tries to convince her boss, Rachel, to add a section featuring domestic travel hotspots. But Rachel says the owner/boss, Nick, wants to keep it international, Chloe had some choice words about Nick, only to find him standing right behind her. They exchange a few more words before he moves on. When she leaves for the day she winds up getting stuck with him in an elevator, she starts to see he is not as much of a jerk as she thought. At Rachel’s insistence Chloe attends the company’s charity gala and she catches Nick’s eye, he does not like who she is talking to and heads her way. She has not spoken to him since the incident in the elevator so she is a bit surprised when he comes over and acts like they were together even going as far as saying they were engaged. I loved how everything plays out in this book, it is well plotted and holds a lot of story for a novella sized book. There is never a dull moment with plenty of drama, angst, some humor and heartfelt moments all leading to a wonderful romance. L.A. Pepper, thank you for this great and entertaining story.

I listened to the Audition edition, narrated by Natalie May for HotGhost Productions. She does a great job bringing the characters and their story to life. She is easy to listen to, her pronunciation is clear and concise. I do wish she varied the voices for each character a bit more, giving each their own unique voice makes it easier to follow them and the story. Other then that she was a pleasure to listen to. Thank you for this great listen

They started off as enemies but there was an undeniable attraction. Problem was he was her boss and she thought he hated her because of an article she wrote about him. He was mad she was working for him but there was something open and honest about her.

This is a marvellous contemporary romance about two people who start of as enemies. The characters are charming and flawed making them personable and relatable. They have a lot of barriers to overcome both internal and external, causing emotional drama for both of them. It is an enjoyable book that left me smiling and feeling good. It is a great read.

Perfect group of books. An easy read that just takes you out of your daily life and immerses you into a world of love, laughter and hunky men.