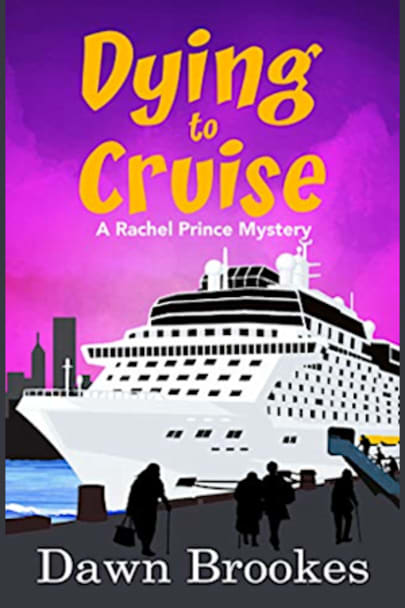 The only thing worse than getting stuck aboard a cruise ship with a murderer, is discovering that your ex is on board…A ruthless killer intent on revenge. Can Rachel get to the bottom of an intriguing mystery before it’s too late?.Rachel Prince is drawn to investigate when the body of the leader of a Bucket List tour party is discovered in the library on the first day of her Antipodean cruise. … on the first day of her Antipodean cruise. Can this seemingly harmless group of elderly people have a killer among them?

Rachel thinks she is living the dream. Taking a cruise around Australia and New Zealand as a guest lecturer and meeting up again with her best friend, cruise ship nurse, Sarah. The scene is set for the holiday of a lifetime!

Difficulties abound for everyone when an interim chief of security causes countless problems and appears to take an intense dislike of Sarah. Not trusting the new chief to get to the bottom of the murder, Rachel investigates on her own, soon discovering that the dead woman from the Bucket List tour party had been receiving anonymous threatening emails. To make matters infinitely worse, Rachel’s ex turns up on board, and things start to go horribly wrong.

The cruise ship sleuth needs to work fast to find out if one of the gentle elders on the bucket list tour is a murderer while avoiding her ex like the plague.

“Dawn Brookes has done it again. I said this about the last one but this is the best yet!” SD
“I absolutely love this series – unputdownable.” RL
more

¸¸.•*¨*••*¨*•.¸¸
Ratings:
Overall – 4.5 stars!
I finished another Rachel cruising adventure a little over a week or so ago. This series is always a pleasure to slip back into. I was stumped and naively dismissed the real killer in error, doh!

Performance – 5 stars! Alex Lee knocked it out of the ball park yet again. She was so good with both voicing male and female characters and making each character so unique to my ears. Bravo!

Before the killer’s big reveal, readers got to enjoy updates on secondary characters like cruise ship nurse Bernard and Chief Security Officer Waverly who’d gotten married sometime after we last saw him in book 2, Dying to Cruise. And no cruise would be complete without Rachel’s bestie nurse Sarah. Nurse Sarah was back on duty as one of the cruise ship’s medical staff who also strangely became the irritated focus of interim Chief Security Officer Goodridge. That fact became a secondary mystery that I also didn’t guess the cause of until it was revealed.

I was also so relieved at who wasn’t the killer.

Up next in this charming cozy mystery series: A Christmas Cruise Murder book 5, available now in Kindle format. I’m hoping this one gets an audiobook release as well, so I can keep reading in my favorite format.

This review is for the audio book.
I enjoyed this book. This is book four in the series and I have listened to all of them and thought they were great and this book is no exception. The characters are interesting and I like the mix of passengers and staff and the way they work well together to get to the bottom of the mystery. There was plenty of suspects and clues to keep you guessing. The added story line of the ex fiancee on the cruise to disrupt Rachel happy life was interesting and added another twist to the plot.
Rachel is on another cruise, this time as a paid guest and everybody one board hopes it won’t be like her previous trips as the head of security if off on his honeymoon. However there wishes aren’t answered when the leader of a group knows as The bucket list tour group is killed. She had been worried for life before she set sail and shared her worries with a dear friend only for him to be the one to stumble over the body. Rachel vowing to stay out soon changes her mind when the acting head of security sets his eyes on an innocent man. Things get complicated when Rachel discovers the man who dumped her for someone else is also on board the ship. Trying to avoid him proves to be impossible when he keeps turning up where she is. Is he following her? Or someone else? With her friend Sarah and the rest of the medical team Rachel sets about to find out what is going on. Will being the self defence instructor prove to be helpful in this case?
I like the narrator with her laid back English voice and think she was a good choice for this book.

This was a really great mystery! I had no idea where things were heading and was surprised by the murderer. I was even more surprised at the why it was done. Some people are delusional and very evil! I’m looking forward to seeing more by this author!

Rachel Prince is taking a cruise around Australia and New Zealand as a guest lecturer and looking forward to catching up with her best friend Sarah (cruise ship nurse). She is teased by other crew members as being a magnet for murder, which Rachel hopes is not once again the case. Joining the cruise are a group of elder seniors as part of a Bucket List tour. When the tour leader is found dead in the library of the cruise ship, the first suspect is her old love. Rachel doesn’t believe this to be true, but after having a run-in with the interim chief security she is warned to “stay of things”.

As a true amateur sleuth and one not to take orders from a difficult and overbearing lug like the security chief, Rachel tries to stay on the down-low while she investigates on her own. Along the way, she bumps into her ex-fiance, has an issue with one of the bucket list cruisers, and finds herself in danger.
This is a cruise themed cozy mystery with a delightful cast of characters, good storyline, lots of madcap adventure, and enough twists and turns to keep you guessing as to whodunit.

Who does not like a cruise? Maybe the person who was murdered? I am sure even a dead person would love a cruise! This is such a fun cozy and so well-written, I could not put it down! Exciting, with the ex along and everything, Rachel still solves the puzzle.