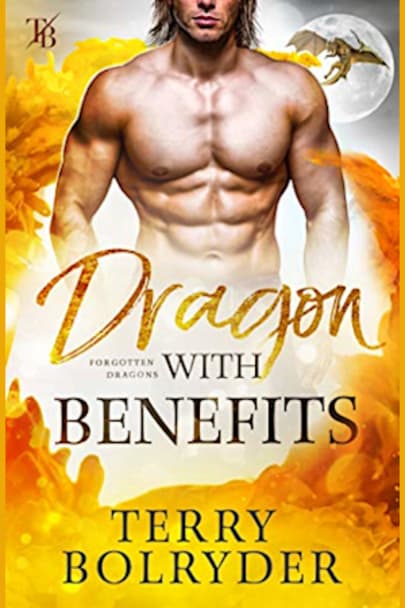 Petra thought she was getting the scoop on the internet’s latest funny video. What she found was a gold dragon ready to turn the world upside down to be with her. Trevor is used to simple pleasures. Like a gigantic mansion. Or expensive sushi. But when he’s caught on video doing something ridiculous that a powerful gold dragon such as himself shouldn’t have been doing, he hopes it will all just … it will all just blow over. Instead, it puts him face to face with the most beautiful, frustrating woman in the world. One that may just be his mate.

Petra didn’t know what to expect of the gorgeous, bronze-haired man from the video on the website she works for. But it’s definitely not the arrogant, standoffish welcome she receives when trying to get an interview. But hottie or not, the sexy jerk stands between Petra and her promotion. And even if she wants to kiss him more than she wants to interview him, she’ll do whatever it takes.

To Petra’s amazement, Trevor isn’t all he seems at first impression. He’s thoughtful, romantic, sensual…and making life complicated again. Meanwhile, Trevor is aware that his world says he can’t take a mate for his own, but he could never let Petra belong to anyone else.

Because even though he’s a double dragon, there’s only one single person in the world that he’ll ever want.

Dragons with Benefits is book 4 in the Forgotten Dragons series!

This girl loves her dragon
This author does dragons like no other. Each of her dragons have a set role to play, but with this series the rules are changing and the lines are blurred. I love how this book brings the merging of several different types of dragons together while adding in the new fae characters. I especially enjoyed the way Chad embraced his friends change in circumstances and made the transition smoother. I hope Chad finds his mate soon and he doesn’t get taken from Trevor. I can’t imagine even his love for Petra would be able to handle the loss of his partner. I think the author has really outdone herself with this series and I can’t wait to see where she takes it next. This book is a wonderful example as to why she’s one of my favorite authors.

Trevor had a melt down and it was ll caught on video bringing him to the public eye. Petra a journalist pretends to be a delivery driver as a chance to get the inside scoop on this latest viral video after all that would be a bonus in her journalistic career What she didn’t expect was a super hot all alpha male that could turn into a dragon. Petra isn’t interested in romance but this dragon has found his mate and he intends to win her Can they get a HEA You will have to read to see.

The paranormal world is undergoing changes

Dragon with benefits brings us the story of Trevor, who is a double dragon and works with Chad to protect their territory. When a delivery driver comes in search of a story regarding a video gone viral with Trevor in it….things start taking a turn

Loved this story of Petra and Trevor, all the challenges and also the new fae. I’m excited to see what changes are coming Thank you to Terry for my advanced copy for which I leave my honest review

I loved Trevor and Petra’s love story. A thoroughly enjoyable read, that made me laugh out load at times and swoon at others. I adored watching Trevor transform from a grumpy and annoyed golden Dragon to a romantic and loving Mate for Petra. It was equally fun to watch Petra transform from a woman just looking to get a promotion in her job as a journalist to an accepting and loving woman. Usually the worst part of reading a book I like is finishing it, but with this book I look forward to what stories are still to come.

A cool story with an interesting storyline! Petra and Trevor have a good build up to their story. I loved the instant fame angle from the viral video and the subsequent things Petra did to solve the mystery. I liked the flow of the story and especially the romantic non romance thing they had going on.

** spoiler alert ** Trevor has always known that he didn’t want to mate in a triad. Petra is determined that love must come last. One video changes everything. Will Petra allow herself to fall? Will Trevor discover it is okay to be different?

Loved seeing another Forgotten Dragons book! I loved how Trevor was different, but yet he still took others feelings into account. I didn’t blame Petra for being scared, but loved how in the end she went after what she wanted. Good read!

These dragon stories just keep getting better and better.. My heart broke for how Trevor was torturing himself with trying to fo the right thing.. Cant wait for Chad’s story..

Who’d have thought a hot guy pulling a hissy-fit over his sushi delivery would give Petra the chance for the promotion she deserved? She worked hard. Now all she had to do was what no one else had been able to do.

Trever was tired of his friend and partner dragon teasing him. He knew he was supposed to be unobtrusive but sometimes it was hard being the protector of all with no chance to have his one to protect. It was his own fault he couldn’t find a mate to make their triad. Then enters this pushy reporter– the gorgeous woman who makes his dragon roar. Not gonna happen–blast it!

Dragon with Benefits has one feature (not gonna tell you what) that I have wanted from the beginning of the author’s dragon series. Thank you Ms. Bolryder. I love all the characters and the turn I’m thinking is going to be the next series. This has steam, old friends, new situations and I loved it.