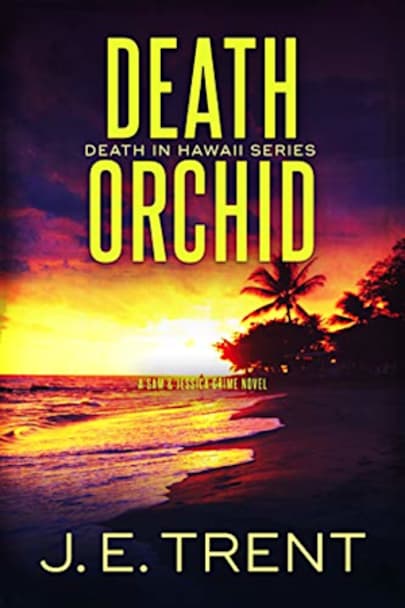 What happens when you rip-off the bad guys?

Ivan Volkov hacked a couple of bank accounts, owned by the Russian mob. He’s hunting Jessica and the Russians are hunting them both.

You won’t be able to put down this addictive book, in a “who’s killing who” on the Big Island. The Death in Hawaii series…beautiful…deadly…and compelling. Grab it today!

Jessica retires from the LAPD and returns home to Hawaii. She has a billionaire boyfriend named same. Everything is ideal until her brakes fail on her new Jeep. Someone has tried to kill her and has killed her friend Aimee and left Aimees son, Henry orphaned.
This is just the beginning of the action adventure! This book has it all Russian monsters, Homeland Security, Navy Seals etc. this book was nonstop action and drama. I could put it down. There was a lot going on in the plot. Too much to explain. I loved the characters and the descriptions of Kona made me feel like I was there. I loved this book and this author! I highly recommend this book and am anxiously awaiting the next book in the series!

Love this author and I love Hawaii

The exciting sequel to Death in Paradise, is Death Orchid – Book 2 in J.E.Trent’s Hawaii Thriller Series, a Sam and Jessica Novel, which continues the excitement as Jessica Kealoha and her billionaire boyfriend Sam return to her home State of Hawaii, after her LAPD career spanning more than two decades.
Unfortunately, the Paradise island of Kona is far from peaceful, as an avenging Russian assassin, whose brother Jessica killed in the line of duty seeks her death, in the most callous way possible.
Having failed at his first attempt,(a shocking sabotage to her Jeep), the killer then devastates Jessica by murdering a close friend of hers, leaving her son Henry motherless and inconsolable.
What follows becomes a vendetta with an unbelievably stunning denouement, where Jessica will literally have to choose between life and death – for herself, a close friend and an innocent child she’s come to treat as her own. Will her decision be the right one and how will it affect those left behind?
Read Death Orchid (Hawaii Thriller Series Book 2) by J.E.Trent to find out – it’ll leave you gasping!

This is the first book that I have read by this author, but it won’t be the last. The location is beautiful, the characters are well developed, and the action is nonstop! So much going on with who was trying to kill who and the money! So much money! Can’t wait to see where the story goes from here.

I received an ARC. This is my honest review.

I love this series…can’t wait til the next book!!!!!

Wow!! Death Orchid is a fast-moving thriller set in the wonderful Big Island. It has lots of action, suspense, beautiful locations and nonstop twists. Can’t wait for the next one in the series!