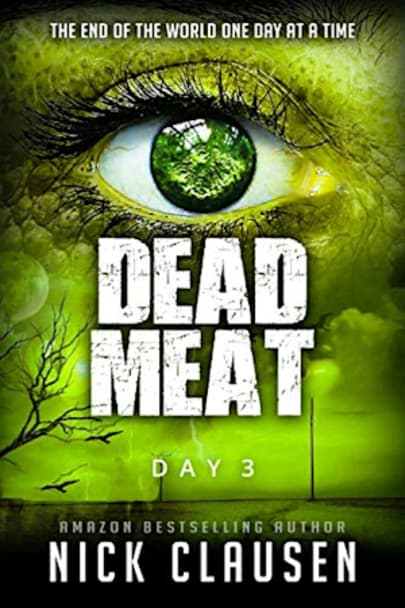 For fans of The Walking Dead and The Orphan Books.

Day 3 of the zombie apocalypse

The story picks up from Day 2. We meet William who works at the hospital. His workday starts out like any other—until he finds two zombies locked in a utility room in the basement. From there, things quickly escalate.

By Day 3, the infection is picking up speed, the zombies are spreading rapidly, and very soon everything could spiral out of control. Is it too late to save the world?

★★★★★ “This series has me completely hooked”

★★★★★ “terrifying, nightmare-inducing, impossible to put down”

“Oh, no!” Krista exclaims. “Mille? I think he stopped breathing …”

Mille turns. Mads’s chest isn’t rising or falling anymore. His cheeks have sunk into his face and his whole body seems lax. The skin is even more grey now than only a moment ago. In fact, it appears to have turned slightly green, too.

“Pull over,” Mille hears herself says.

The Arab looks at her uncertainly. “Hospital here?”

“We’ve got to help him, Mille,” Krista whines. “How do you do it …?” She bends over, and for a crazy second Mille thinks she’s attempting to kiss him back to life, like Snow White in the fairy tale. Then Krista starts blowing into his mouth.

“I think it helps,” Krista cries and blows helplessly into Mads’s mouth.

The car has stopped.

“Krista, stop that! Get out of the car!” Mille opens her door and jumps out. She runs around the car and is just about to open the back door, when her gaze falls on Mads’s face through the window. At that exact moment, he opens his eyes.

What happens next plays out in slow motion.

Krista bends down once again to blow into Mads’s mouth, but then gives off a noise of surprise and says: “My gosh, it worked!”

Those are the last discernable words out of Krista.

Mads sits up abruptly and sinks his teeth into her chin. Krista screams and tries to push him off, but he’s clamping on like a Rottweiler and buries his fingers in her hair, pulling her down farther. Then he makes a violent tug with his head, ripping off most of the skin from Krista’s chin. The lower lip tears in two, exposing the teeth in a gruesome smile. The blood gushes out and Krista screams shrilly in pain. It only takes Mads a few seconds to gobble down the chunk of skin, then he shoots up again, this time biting into the soft tissue of Krista’s throat, turning her scream into a croak.

Mille doesn’t see any more than that. She doesn’t hear anything either; not her own drumming pulse, not the Arab’s panicked yells, not even the blaring of the car horns as she staggers backwards out into the road. She simply turns her eyes to the sky and faints …

This series just keeps getting better and better!

To date, this series has been about a range of characters trying to prevent a zombie apocalypse after a resurrection ritual goes horribly wrong. After reading the last book, my hopes for this series was that it would pick up on a larger scale. You know, riots in the streets, chaos unchained, all that great stuff a morbid zombie lover could want.

And that’s exactly what I got from this book.

Yet again we are thrust into the chaotic lives of a number of characters. Personally, I liked William and Dan the best. They’re clearly different in terms of personality with William being more of the alpha male role, but I liked the subtle tension between the two when they disagreed on certain things. But mainly I just liked how they reacted quickly to the events happening around them. They aren’t necessarily the brightest bunch, but they know when they are royally screwed if they don’t move.

Mille was interesting, though I didn’t get a full sense of who she was from this book. I hope to see further development going forward.

The only character I didn’t care for (and the reason behind my half-star reduction) was Finn. I didn’t think his mentality or actions made enough sense, much how I felt about Janjak in book one. He’s a bit too sensitive and a quitter for my taste, and his actions later on in the book had me saying to myself “Oh, just die already!”

This book was full of nonstop action. I could see each vivid, gory scene in my mind as I read along, and I loved how the chaos ramped up with each chapter.

If you’re looking for chills and thrills and aren’t squeamish, this is the zombie book to read! Can’t wait to read more.

Dead Meat: Day 3 by Nick Clausen is another addition to this awesome zombie series. This one was even more intense than the other two and much more gruesome!

I could not put this one down.

Day 3 was my favorite in the series so far! It was another super fun, but also wicked stressful read. I wanted to just scream at the random people that couldn’t comprehend what was going on and kept putting themselves in harms way.

I really enjoyed all the nods to and mentions of zombie books and films like Shaun of the Dead and The Walking Dead!

If you’re a fan of zombie tales, I highly recommend checking this series out!

“Perhaps I’m one of the first to meet the undead?”

William is right. The zombie apocalypse is in the early stages. You won’t find it on social media. I love this tidbit.

Dan had woke up to a normal day, until…It was too late to stop it. A moments hesitation ended the possibility. Now, it’s a matter of who will survive.

Millie…were any of her friends left alive?

Holger…mentally impaired, or is he? After all his paranoia and prepping, the time is at hand to make use of it.

I can hardly wait to find out what happens next and who will survive to tell the story.

I voluntarily reviewed a free copy of Dead Meat: Day 2 by Nick Clausen.

During Day 3, things are getting serious, the virus is spreading faster than people can keep track. Our cast of characters has grown, but with the level of seriousness, they are coming together to try and survive the zombie apocalypse. With the multiple characters and multiple settings, things are growing intense. Our main characters, William, Dan, and Millie must figure out a way to survive this, even if their loved ones have not.

The only thing that I didn’t understand, was that William’s uncle had said he didn’t realize use his safe-house, yet he was out picking vegetables when the crew showed up. A small inconsistency that is easily fixed. Aside from that, I enjoyed this one the most out of the series so far. There was a ton of action going on and it had a fast-paced, “must find out what happened” vibe. I really like Dan and William and I’m curious to see how they are going to handle the impending doom.