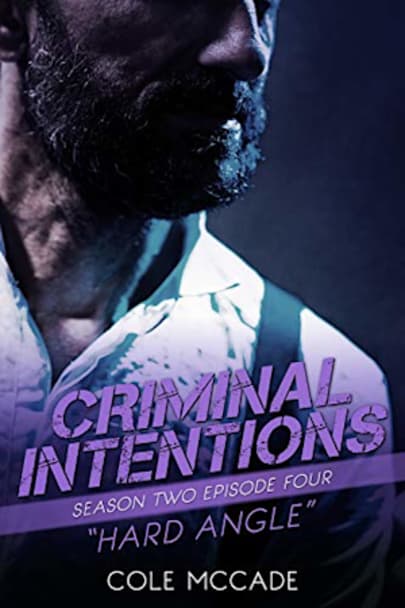 ABOUT THIS EPISODEUnsettled tensions from the last case come to a head as Seong-Jae reveals his secrets — but will it be enough to repair the fractures in his relationship with Malcolm?Especially when their only promising lead on the Golden Ratio Killer’s identity falls apart, along with any hope of returning home to Baltimore and to their life together.When their primary suspect turns up dead…… together.

When their primary suspect turns up dead…

…after attempting to kill the daughter of another suspect.

The Golden Ratio killer’s strange web of deception, double-backs, and doppelgangers grows ever more tangled, and as those twisted threads ensnare Malcolm and Seong-Jae, they find themselves pulled ever further apart. Not even Malcolm’s patience may be able to save them, their relationship a painful casualty of their job.

That doesn’t mean he won’t try.

But Malcolm’s desperate attempts to hold them together put them in the wrong place at the wrong time.

And that unfortunate coincidence?

Malcolm Khalaji and Seong-Jae Yoon are back on the case — and partnering with the FBI on a horrific serial murder case that will test Malcolm’s faith and revive the darkest parts of Seong-Jae’s past. With an enigmatic killer leading them on a wild goose chase through city after city and body after body, both Mal and Seong-Jae will find themselves pushed to their limits as they discover the worst of what humanity can do.

Even two minds against one may not be enough as they track the devious Golden Ratio Killer, and try to find the key to his pattern. But the trail of breadcrumbs left by the white rabbit will lead them suspiciously close to home, and a connection they never could have predicted. With their worlds exploding around them and everyone they know suddenly cast into doubt…

Can their partnership — and their love — survive the greatest trial of their lives?

CRIMINAL INTENTIONS Season Two, Episode Four: HARD ANGLE by Cole McCade is a really awesome story that I have read. This is book number seventeen out of eighteen book and I can not wait to read the next book in this series. I highly recommend this story to everyone who loves reading about romantic suspense, mysteries and LBGT romances.

He is revealing his secrets to them and he worries it will ruin their relationship. Their main suspect has been killed while trying to kill the daughter of another suspect. Where will they go now? Will they find who is the killer? Will they repair their relationship? See how they get on

What the fuck is that cliffhanger?!!!!! The shit is going down!

I’m so glad that Seong-Jae and Malcolm finally talk and we get more of their banter. Seong-Jae is fucking adorable when he’s hissing and spitting out words like he’d rather stab himself with a fork. He’s so cute when he blushes. This book has some of my favourite moments between them.

“Because you never find yourself as cute as I do.”
“Do not use that word.”
“The c-word? Dirtiest four-letter word in the English language, I know.” Malcolm smirked, leaning in. “Cute.”
For his troubles, he earned a horrified look, a curled upper lip…
And a long hand splayed over his face, shoving him back.

What the hell is up with Min Zhe? And Sila is still creepy as ever. I loved Anjulie and Gabi even if I can already see Gabi’s heart getting shredded to pieces.

Gabrielle couldn’t say no.
Not even when her heart was breaking.

And Malcolm says some of the most beautiful lines ever. SWOOOON!!!!!

“Detective Lieutenant Seong-Jae Yoon. Pain in my ass, breathtakingly beautiful, dryly funny, shockingly intuitive, terrifyingly intelligent, annoyingly pedantic, a brilliant detective, consumingly intense in bed….and who will kill me if I ever call him Scott.”

Action packed, sexy, fun, engaging and emotional adventure filled with danger, suspense and undeniable passion… an edge of your seat read from beginning to end and so hard to put down. Really enjoyed the charters I got to know on this journey.

I had to egg myself on to read this segment of Yoon and Khalaji’s latest investigations arc because the previous episode was just too much foe me. This one is better for one excellent reason: SURVIVORS.

Their love for one another survives. The murder attempt on the girl in Arizona spares her. There is facing of dark and traumatic memories in LA and also in Baltimore. Even a bloody ending in chaos can’t extinguish the spark of hope that is renewed in us, the readers, by just one or two people living through this. Not that they all do.

I can keep going now.

The opening gives me pause. As usual, lots of moving parts. How much can Malcolm and Seong-Jae take? How hard does the brain have to work to keep itself and the body happy? There are several twists that the reader does not see coming. Well done Cole! The trigger warnings are great and wet the appetite and get the brain ready for the new puzzle. Nice. I received an ARC from Booksprout and am voluntarily leaving a review.

So I always say how much I love this series and I can’t say it enough to really do it justice. But I am a true crime buff and I must say using parts of a true crime in this season was hands down a great addition to this series. The fact that the author actually gives you the information to look up that crime was also wonderful. I did actually look up that little tidbit but I’m not going into that in this review as that’s a wholly different from this series. Hands down and a round of applause for another great addition to this series. I can’t wait for the next book.-Enjoy

In this book the characters have more adventure
and mystery. impatiently awaiting for the next book in this series.
I voluntarily reviewed a copy of this book via Booksprout.

I seriously do not know how but I love this series more with each book that comes out. These characters have me impatiently awaiting their next adventure, I cannot get enough.

I absolutely loved this book! While in previous episodes the author threw hints here and there and left me guessing, this one exploded with new facts and truths about some of the mystery of the Golden Ratio Killer case. Even if some were expected, the way they were introduced was sooo good and at times poetic!

First part of the book was slightly mellow focusing on Mal and Seong-Jae patching up their relationship. They were so cute and sweet together, and not in a way that would hurt teeth, but in that *awwww* way that just made me sigh. They overcame some harsh obstacles and became even closer. There is nothing like acknowledging the problem and consciously working on fixing it together. I loved the moments where guys were relaxed enough to tease and joke around, just have a little breather. They did need one badly.

The case is chugging along nicely with new unexpected atrocities committed and more questions than answers piled up on top of their heads. I love Seong-Jae’s thought process and how he and Mal bounce ideas off each other. Aanga actually was rather funny this time besides being his usual stuffy a$$hole self. I liked a bit of return to Baltimore and how things were in there, and boy did they heat up or what?

All in all, this book had the mushy and happy, the suspenseful and gory, the emotional and sexy parts that made this a freaking fantastic episode that left me gaping like fish out of water by the time I read the last page. I can’t wait to sink my teeth into the next one, since this episode ended so perfectly intense and scary. Awesome!