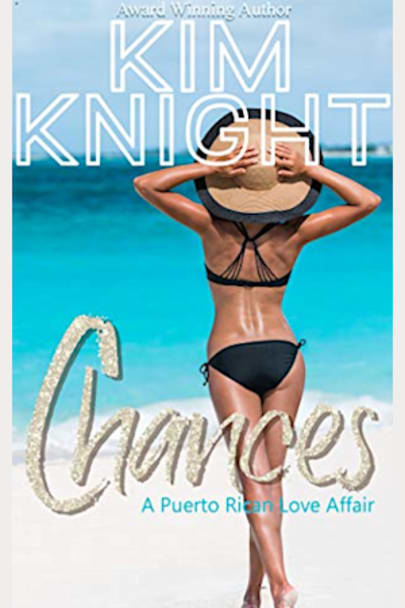 Would you risk a second chance, 4,000 miles away in paradise?Chances, A Puerto Rican Love Affair is book three of the Romance Set In Paradise Series. Of romantic, steamy and suspenseful stand-alone novella length stories, all set in exotic locations around the world. Each one can be read as a stand-alone book.Thirty-one year old Gabby from Barcelona, Spain has a love for the finer things in life … finer things in life including successful men. She finds herself in need of a change of scene. Opportunity knocks when the European company she works for as a successful estate agent, selling properties to elite clientele expand. Giving her the chance to take a one month work sabbatical, in the beautiful vibrant Caribbean island Puerto Rico. She snaps up the chance to leave Europe behind. Here her path crosses with thirty-five year old Puerto Rican born Mateo Sanchez. A former ‘bad boy’ turned entrepreneur. They touch each other on a physical and soul level, the two become connected. Thing is, while the passion, heat and romance builds between the two, the pair’s love affair becomes caught up in a web of lies, deceit, and betrayal from the past.

Mateo and Gabby fight hard for their blossoming relationship, and against the drama that keeps following them. But there are decisions and sacrifices to make if they are really going to make it work. There’s nothing that Mateo won’t do to show his growing admiration for Gabby, even when the police get involved and he’s in the hot seat. His hand is forced he’s pushed to make moves he promised he would never do again, due to past events and to move forward with Gabby. Gabby is faced with the decision over what sacrifices she’ll make, and where she really sees her future. Back in Spain, London or 4,000 miles away in Puerto Rico. Romance, soul mate connection, heat, lies, betrayal and brushes with the law await readers in this exciting multicultural ‘second chance’ romance.

Chances, a Puerto Rican Love Affair, is the third book of the Romance Set in Paradise series by author Kim Knight. I have previously read a different book by the author, but nothing from this series. Luckily, you can jump around and not get lost at all. I thoroughly enjoyed the writing style, characters, and setting. Let’s dive into the details…

Gabby has a problem with her ex. He doesn’t want to remain her ex. But he not only cheated on her, he carried on an affair for over 6 months while he was still dating her. They had a long-distance romance, and when she discovers the truth, she takes off on work opportunity to Puerto Rico for a month. That should be enough time to get him out of her system, right? Yeah… not that easy. He tries to video chat daily, and it sends her into the arms of another man, Mateo. This hunky chef and restaurateur has his own set of problems, namely an ex who cheated on him, except she pretended he was the father of her baby. Can two lost souls make it work amidst their dramatic exes?

So… I’m not a big romance reader, but occasionally I pick up one. Kim Knight’s books are always easy for me to enjoy because as much as they are about a romance and contain several steamy or erotic scenes, there is a clever and strong story that keeps me fully focused. Between the beauty of Puerto Rico and the dynamic character development, I easily slip into the “OMG, what’s going on?” moments. I must say, she depicts a few characters I wanted to slap and punch. But when the story came to a climax, I had no way to predict this one. Shocker Times Two! Loved it.

By flipping back and forth between the two main characters, we really get to know them in their personal lives and natural habitats. Mateo’s financial struggles were real, and when someone reaches out to help him, I couldn’t believe the way the guy tried to push his way into Mateo’s business. Sure, helpful, but really? What a character… yet it was real, as it fit his personality and to some degree the differences in culture and relationships from what I normally experience. It’s great to see such diversity and distinct characterization.

When Knight delivers the physical parts of the romance, I get a little squishy… not because they aren’t good — they are! But I truly feel like a voyeur. At least I can read it in the privacy of my own home with no one else around to see my reactions! But truthfully, it’s realistic, tasteful, delicious in some ways, and really packs a punch. Who wouldn’t want a romance like this one? Sign me up! Maybe Puerto Rico is in my future again… been there before, but for work. I didn’t approach it like Gabby. Now she is a woman who knows what she wants. And when she found herself in a bad place at a bad time, wow… did I want to reach into the book and help her. Kudos to Knight for making us love this heroine.

The ending was bittersweet and tragic. I won’t give anything away, but not everything ties together with a perfect bow in life. At least not right away, and not for everyone. That said, the ending was strong and I really did like it. I think you will too. Take advantage of this one — newbies to the genre and professionals who read them all the time. It’ll be worth your time!

I read this whole book yesterday from cover to cover in one day – two sittings! Chances, a Puerto Rican Love Affair is book three in Kim Knight’s romance set in paradise series, but each book can be read as a stand alone. It’s smooth pace, paired with a few insanely suspenseful scenes makes it a very easily devoured book! The characters are realistic, memorable, and relatable, especially Gabby the main character. Along with her bestie in Spain Valentino, and her new found girlfriends in Puerto Rico Pricilla and Sonia. Then there’s Chris, the questionable long distance cheater, and Mateo the family man with great business potential that meets Gabby’s eye while traveling for work. Each character is drawn up well, and quickly wiggles their way into your heart.

Gabby is a real estate agent, and after having a rough patch and breaking off her long distance relationship with Chris, she decides to take a leap and apply for a short term job in Puerto Rico. It’s just the opportunity for her to throw herself into work in a different setting, and to have a change of pace to clear her head. Her boss supports her decision to apply, as she’s perfect for the job. She’s nervous, but nails her interview and is soon packing her bags.

She settles in quickly, loves the place that they have set up for her in Puerto Rico, and she even completes a huge property sale right off the bat. Meeting a new client at a classy diner close to the office every day for the first few days on the Island is how she meets Mateo. At first, she assumes he’s merely a waiter, and he assumes she’s dating her client. They’re both very mistaken. Mateo actually owns the place!! He’s SO hot! I really like Metao. Their attraction is instant, but, aside from one dance and an unexpected kiss at a club, they don’t really get to know each other until Mateo has been blessed with a business opportunity in catering a masquerade ball for her real estate company. Once they’re able to really talk and spend a little time together, they’re unable to do or think of anything aside from each other and work. They’re pull to one another is passionate, it’s the start to beautifully chance at a real soul connecting relationship with so much potential.

However, not everything is peaches and cream in Mateo’s life… which very quickly escalates into deadly trouble ahead. His ex-girlfriend and the mother of a child he always believed to be his – but isn’t – is a crazy bitch. You see, a few months before Gabby came along and he found out that the baby hasn’t been his all along, so he broke it off with Juana. She’s jealous and absolutely nuts. She follows them and threatens Gabby, and oh so much more! I won’t give away any more details, because anything else would be serious spoilers!!! SO, if you want to know more about what happens in this twisty love affair then GO READ THIS BOOK!!

Book three in the series brings a steamy romance with tons of steam and suspense. The author does a great job developing the story and brings an entertaining read. It’s well written,moves fluidly and I enjoyed reading.

I voluntarily reviewed an ARC of this book. All opinions in this review are my own and freely given.

A wonderful, entertaining read that is also one that is full of plot twists and turns, highs and lows — locking you in from the beginning as the reader! You’re drawn emotionally into the characters’ lives and the decisions they must make and the CHANCES they decide to take … all making it so that you can’t wait to get back to reading their story again at your next opportunity. One of the themes of this novella focuses on choosing between a stable, financially-secure life/mate and a life/mate who may be less so but is indeed your true love and soulmate. What, or who, will win out in the end?? Read to find out!!
This book was offered at no cost on the internet and I am voluntarily reviewing it. Due to editing issues present, the rating of this book is really 4 1/2 stars = very good; 5 stars for everything else

Gabby works for Barcelona Properties and they are expanding their international market. After finding out her boyfriend has been cheating on her, Gabby decides she needs a change of scenery. Her company offered an opportunity to go to Puerto Rico for one month to work Gabby accepts the offer and sets sail. She meets Mateo a struggling restaurant owner with a sketchy past.

This book is a story of perseverance, overcoming your past and second chances. I fell in love Gabby and Mateo’s story. The characters in the story well developed and fleshed out. Knight does a great job of taking the reader away to a tropical island. I enjoyed reading this story. This book would have been an amazing read with some polishing. There were several spots of confusing dialog and quite a few typos. I felt the the psycho ex-girlfriend part was a bit overdone but is explained in the end.

I received a free copy and am voluntarily leaving a review which is my opinion alone.