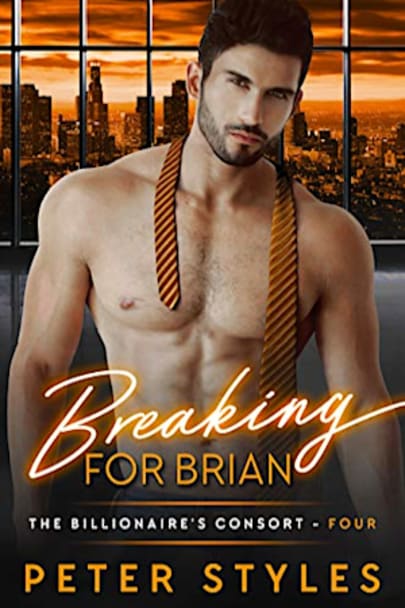 “I’m swearing off men.”Brian Hattersly is used to a life of wealth, using it to propel him forward into tennis stardom. But after he’s forced into retirement and his gold-digger fiancé leaves him, he’s left asking one major question: what comes next? One thing’s for certain – he has no intention of jumping into another relationship, especially not with someone like Jeremy, who challenges him at … challenges him at every turn.

“He thinks that I can’t submit – but I’m going to prove him wrong.”

Jeremy Hughes has been familiar with The Billionaire Club for years… but he’s never been more than mildly interested. All the contracts and secrecy are a bit too much for him, not to mention Jeremy’s natural dominance. He’s never wanted to play the submissive for anyone before – but when Brian makes it clear that he doesn’t believe Jeremy is capable of surrender, Jeremy refuses to back down from the challenge.

Who will win in this game of love?

I’m reviewing the audio edition. This is one of the best of this series. Brian feels he is a dom. He really is interested in Jeremy but Jeremy shuts him down at every chance he gets. That is until Brian sort of challenges Jeremy at the club. The main problem is they are both doms? Brian finds out maybe he isn’t. I enjoyed the back and forth between these two characters. The only trouble is the narrator I didn’t feel is right for these characters. He is too monotone throughout the story.

Jeremy is twenty six and works at Dis-chord Records an Indie label. He loves his job. He helps a drunken Brian home one night. Brian is close to forty and is a retired tennis player. He is also loaded. He fiance played him and broke his heart and he doesn’t trust anymore. They’re attracted to each other but Brian is afraid to trust in love again and Jeremy isn’t into kink. I really enjoyed this book and also the whole series.

I really enjoyed reading this outstanding MM romance & it is the fourth book in the “Billionaire Consort Series” I found the story-line interesting with a well-paced, intriguing plot. The characters are well-developed complex individuals with unique personalities.
There is: a former male tennis star (Brian) is forced into retirement & has some sad memories of what could have been, he comes into contact with a kind-hearted but takes no nonsense kind of man (Jeremy), the cat Jeremy is trying to tame (Jasper), a obnoxious graphic designer (Garrett), a caring female CEO (Laura), Jeremy’s cousin (Alex) & the recruiter for the “Billionaire Club”, some twists, drama, verbal bluntness, belittlement, confrontations, vulnerability, regrets, warnings, attraction, complications, challenges, manipulations, frustration, threats, realization, jealousy, doubts, confusion, emotional turmoil, advice, seduction, compromises, love, steamy scenes & a delightful ending. I would recommend this book.

Brian is a former big shot tennis star, and the current owner of a very broken heart. His ex Steve tried to bilk him out of his fortune, and dumped him like a hot rock when Brian refused to give Steve full access to his funds. Dumped shortly before their wedding.

Brian meets Jeremy when he goes out to try to drink Steve out of his system. He wins a nasty hangover and a bad attitude towards Jeremy, who only scooped Brian up and got him home and tucked in safely.

Brian will need to get his head around not punishing anyone but Steve for how he hurt Brian. Jeremy is very much not at fault and deserves fair treatment.

Love can go more than a little wrong if issues from the past are worked out on the new guy!

I read this book on Kindle Unlimited. I got an advance copy of this book from Booksprout. I have read most recent series from this author.