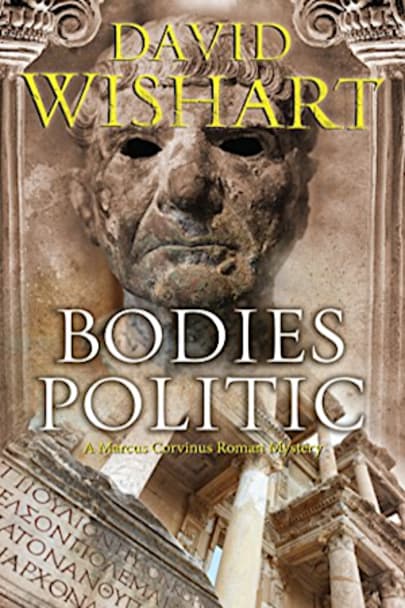 When Marcus Corvinus is given a letter from Sertorius Macro, the Emperor Caligula’s erstwhile adviser forced into suicide for plotting against him, claiming that he was innocent and asking Corvinus to clear his name, he isn’t keen on the job at all; sticking your nose into the political dirty laundry basket is currently just too damned dangerous. However, when the inconsistencies begin to mount … mount up, Corvinus is firmly hooked.
It’ll take him two near-death experiences, a lot of fancy footwork in avoiding the fatal attentions of Rome’s great and not so good, and some serious riot-dodging in Alexandria before he works it all out, mind…

Bodies Politic is another volume in the “political” side of the series. We are again treated to high-level intrigue, this time in the Roman empire’s court under Caligula, as Corvinus unravels and connects the constant schemes and conspiracies.

With Rome now in the grip of the emperor Gaius (Caligula), Corvinus wants to stay as far as possible from politics. Naturally he’s drawn into untangling conspiracies involving the closest imperial circles, legions and legates that control the armies, and far-off unrest between Jews and Greek in Alexandria.

This is book 13 of the series, but though there is some continuity from books one to three most of the others can be read out of sequence. This has some very light references to previous novels, but they are hardly needed to enjoy it on its own.

I love how Wishart portrays Gaius. Many historical writing present him as a deranged, debauched maniac as he’s presented by Suetonius (who was writing in later decades, under emperors who had a vested interest in blackening their predecessors’ reputations). Wishart characterisation gives us a prince of the crown, born to the legacy of Germanicus and groomed by Tiberius, in a balanced portrayal that acknowledges his unsavory character without going overboard.

I also enjoyed Corvinus’ trip to Alexandria. Though the man abhors sight-seeing, we still get an view of the city at the time, with its idiosyncrasies and charged political atmosphere under Roman rule. Also, we learn about local wines 🙂

Wishart has a great talent for breathing life into Roman politics and figures, with engaging characters and complex plots. His research and anecdotes are always top notch, the writing style fluent and immersive. The characters we are presented with are fully realised, well drawn people, and Wishart makes us care about what’s going on.

Corvinus in particular has a most unique voice that is a joy to read, though throughout the series Wishart uses a modern language to bring the characters to life. He’s also using a time-honoured trope of representing the Roman patriarchy similar to British aristocracy. The result is a novel that reads as a cross between Sam Spade and Downton Abbey, on a backdrop of ancient Rome. It makes for very enjoyable experience for lovers of those genres – we’re not reading in Latin, after all, so taking a purist view is in itself a untenable proposition.

Though Wishart’s prose is excellent, he avoids all Latin terms to the point where it’s a bit much (like referring to a toga as a mantle, or to the Forum as Market Square). I find this a bit diluting the experience of Rome, which is a big factor to anyone reading Roman-era fiction.

This is another great volume in the series, and the political machinations are on this side of plausible, just as good historical fiction should be. If you like cosy mysteries and Roman-era detectives (e.g. by the likes of Lindsey Davis, Steven Saylor, and Ruth Downie), you really need to read the Corvinus series as well. This is as good a starting point as any.
—
Assaph Mehr, author of Murder In Absentia: A story of Togas, Daggers, and Magic – for lovers of Ancient Rome, Murder Mysteries, and Urban Fantasy.