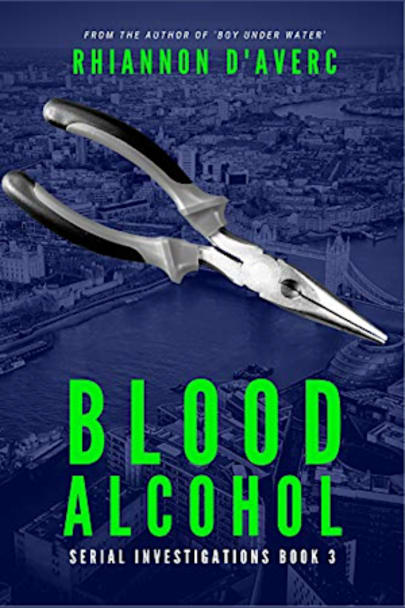 A horrific torture case with a ticking clock.All he can see is the bottle.Private detectives Ram and Will thought they’d wrapped everything up when they found Ray Riley’s body in Sevenoaks. But it turns out that things aren’t what they seemed – and Riley may be the latest victim of a torture-happy murderous duo. For the second time, Serial Investigations London are called in to assist as civilian … London are called in to assist as civilian consultants with DI Alex Heath’s team at the Met – but they have their own personal problems getting in the way of clear thinking.

Will has something to get off his chest, and it’s related to that kiss they shared – the one they both tried to forget. But Ram can’t stop drinking to push away the confusion, and this time he’s going to land himself in more trouble than ever before.

Can they get over their issues for long enough to stop another murder – or even keep themselves alive?

If you’re a fan of BBC’s Luther, Jo Nesbo’s Harry Hole, or sharply witty gay men, you’ll love Serial Investigations. Continue the action with Blood Evidence, the second book in a series you won’t dare to put down.

Click ‘Buy Now’ to enter the minds of troubled yet brilliant detectives as they search for a murdering couple, while their own demons fight for control.

Praise for Serial Investigations:
“The front cover didn’t lie; Bloodless is exciting and thrilling.”
“Sets up a really great atmosphere right from the start and constantly leaves you wanting to find out what happens next.”
“A punchy storyline makes it difficult to put down and leaves you wanting more.”
“Just the right amount of action, plenty of intriguing deception and detective work.”
“Love the plot twists! Can’t wait for the next book to see what happens next to Will and Ram.”

I’ve genuinely been sitting here staring at my computer trying to figure out where to even begin with this review for ages. The Serial Investigations series has been up and down for me from the start. There are things I do really like about Ms. D’Averc’s crime novels. I’ve enjoyed parts of the mystery and cases. I’ve laughed at some of the banter between the characters. It’s also been nice getting to know the characters a little better over time. But, there are things throughout that made me question the author’s writing style, things that don’t make sense, come across as questionable, or just seem rushed.

In Blood Alcohol, we follow Will and Ram as they work on two different cases. The first is for their PI business. They were hired to see if the wife of a new client is cheating. Alongside that, DI Alex calls them in as civilian consultants for the Ray Riley and Simon Shystone cases. Those are the two cases we learn about in book two when Ram and Will helped to solve the murder of Isabelle Rupert. Blood Alcohol carries on with the discovery of the two men’s bodies at the end of Blood Evidence.

The overall plot for book three was so-so in my opinion. I was caught up in the mystery of Ray and Simon’s deaths. Add in the horrendous treatment of the sex workers that came forward and I was hooked on the mystery. All of the detailed information that Jodie Reid gives in her interview had me flipping pages just to see what she went through. I wound up really wanting to know who the self-proclaimed Bonnie and Clyde were because they needed to be stopped.

I’d say one thing, I would have loved more gritty details in the women’s interviews. If an author is going to write a crime focused novel with awful things happening to people, I’d like the author to fully commit. It almost seemed like Ms. D’Averc skated over a lot of the gruesome details because she was afraid it would be offensive or too dark. I can understand her not wanting to take the book in a grievous direction. But, Ms. D’Averc is toying with a grisly genre writing crime/mystery. The main focus of the book is the crime/mystery. I just wish that she would have committed.

Now, I hate to say it, but I’m about to go on a bit of a rant in regards to Will and Ram’s burgeoning relationship. There will be some spoilers here, so if you don’t want to know what happens, please don’t read the following spoiler/rest of this paragraph. It’s been obvious from book one that Will is holding a torch for Ram. Ram is a playboy, pulling a different dude every time he hits up a bar. Over the first two books, we watch as Ram starts to see Will in a different light. He’s attracted to his best friend. Will finally comes to terms with his sexuality thanks to his friendship with Harry. Eventually in book three, after the kiss at the end of book two, Will confesses he is gay to Ram. That’s great. I was hoping the confession would make things blow up between them in a sexy way. Nope. Not even a little. Aside from some pining and distractions, there was nothing until the end of the book. They wind up making out on the couch with the promise of sex given to the reader. Then the chapter changes to Ram’s point of view and it’s the following morning after the sex. I was beyond pissed AND let down by this. Will was a virginal closet case until suddenly he wasn’t and we don’t even get to experience his first time. This left me feeling distanced from the characters. I feel absolutely NO connection to either of them and that’s not even just because we aren’t let in on their intimate lives. I’m not sure if it’s because the author isn’t connected with her characters or if she just doesn’t want to let the readers get to close. No idea. But, it was so disappointing. End of rant.

Good news though, folks. We finally find out what the San Francisco secret is that’s been looming over their heads. I’m not going to spoil it, but I will say that it’s pretty much what I expected. I’m sure I’m not the only one able to put the details together enough to guestimate what happened. So yeah, that is a plus for book three.

My final opinion is Blood Alcohol fell flat for me. The mystery needed to be told in more depth. Bonnie and Clyde should have had more page time. They were the ‘big bads’ of the book and yet they didn’t have much of a presence. The relationship development for Will and Ram was a bunch of crap. There was nothing, nothing, nothing, and then, BAM, there’s something. But, that something wasn’t what you were expecting exactly. It drove me crazy.

Before recommending this novel to anyone I would have to be brutally honest with them. I would say if they are looking for a book or series with a hot relationship between two badass PIs, this isn’t the right book or series for them. I would let them know that the mystery/crime should have been fleshed out more. That part of the book isn’t horrible, but it’s not great either. If it sounds like something you’d enjoy, please do give it a go. So many other reviewers are saying this series is great, so maybe it’s just me.